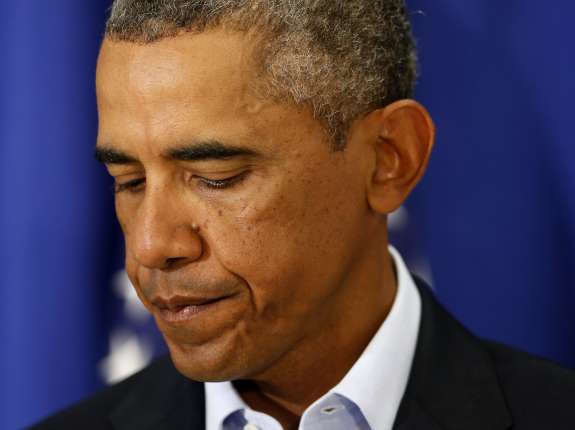 President Obama said Wednesday that the extremist group that carried out the beheading of U.S. journalist James Foley engages in "cowardly acts of violence" and "has no place in the 21st century."
Image credit: Kevin Lamarque

The extremist group that carried out the beheading of U.S. journalist James Foley engages in “cowardly acts of violence” and “has no place in the 21st century,” President Obama said Wednesday, referring to the videotaped execution carried out by militants with the Islamic State.

Obama also said the group attacks women and minorities, “for no other reason than they practice a different religion.”

The president delivered a short address about the killing just hours after U.S. intelligence officials confirmed that the militants’ video of Foley is authentic. The footage was first posted online Tuesday.

“ISIL speaks for no religion,” Obama said, using an acronym for the group. “ISIL has no ideology of any value to any human beings. Their ideology is bankrupt.”

“People like this ultimately fail … because the future is always won by those who build, not destroy,” Obama said, speaking from Edgartown, Mass. “The world is shaped by people like Jim Foley.”

Foley, a New Hampshire native, had been kidnapped while covering the civil war in Syria in 2012. In the video, the Islamic State said the execution was retribution for recent American airstrikes on its forces in Iraq.

As for the Islamic State’s claims that it is at war with the U.S., Obama said the group has been fighting not the U.S., but its neighbors in the areas of Iraq and Syria where it operates.

“When people harm Americans anywhere, we do what is necessary to see that justice is done,” Obama said.

As we reported earlier today:

“The video was uploaded to YouTube on Tuesday afternoon and later removed; since then, it has resurfaced elsewhere online. The images show Foley kneeling next to a masked militant and reciting comments against the U.S. before being killed.”