President Obama Meets With Families As Orlando Grieves The Shooting 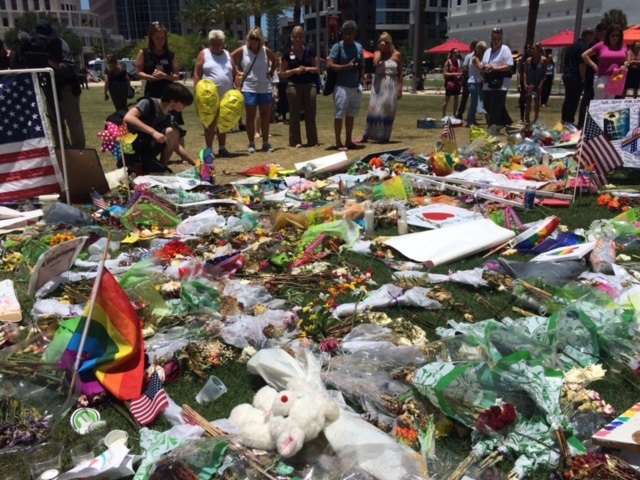 President Obama and Vice President Biden landed in Orlando 12:45 pm Thursday. The president talked with the families of the Pulse nightclub shooting victims and first responders.

The president left the plane with Congresswoman Corrine Brown and joined up with the Vice President at the foot of the steps of Air Force One. Gov. Rick Scott and Mayor Buddy Dyer met the president on the tarmac, where the president hugged Dyer. The mayor then showed Obama a black t-shirt with “Orlando Pride” and a rainbow heart on it.

U.S. Sen. Marco Rubio and Sen. Bill Nelson were also with the president.

As the presidential motorcade snaked its way through Orlando, drivers on I-4 pulled over on the side of the interstate to stand and watch the president go by. Dozens of people stood along Orange Ave. as the president made his way to the Amway Center.

As President Obama met with families of the shooting victims at the Amway Center, people were paying their respects at the makeshift memorial across the street from city hall. Letters, photos, flowers and balloons are filling the lawn of the Dr. Phillips Center for the Performing Arts.

The handful of people WMFE talked with said they were moved that the president took the time to come grieve with the victims’ families and that it was appropriate that he make this visit a largely private event.

Medical Examiner Works Through Three Tragic Cases
“This has been the most difficult week for our community,” words from the Orange County Medical Examiner.

In a released statement, Medical Examiner Dr. Joshua Stephany extended his condolences to the family of Christina Grimmie, the former contestant for The Voice who was gunned down after a concert last Friday night.

He then extended condolences to the family of the shooting victims and the family of 2-year-old Lane Graves who was killed by an alligator at Disney.

Stephany said while medical examiners train for these kinds of events, nothing prepares them for the devastating loss.

The State Responds
The Florida Department of Law Enforcement has put aside $520,000 to help pay for overtime for the Orlando Police Department. The FDLE has requested $2 million in emergency Justice Assistance Grants from the Justice Department to help with similar costs.

The Department of Economic Opportunity is working with businesses who want to help support the victims and businesses affected by the shooting.