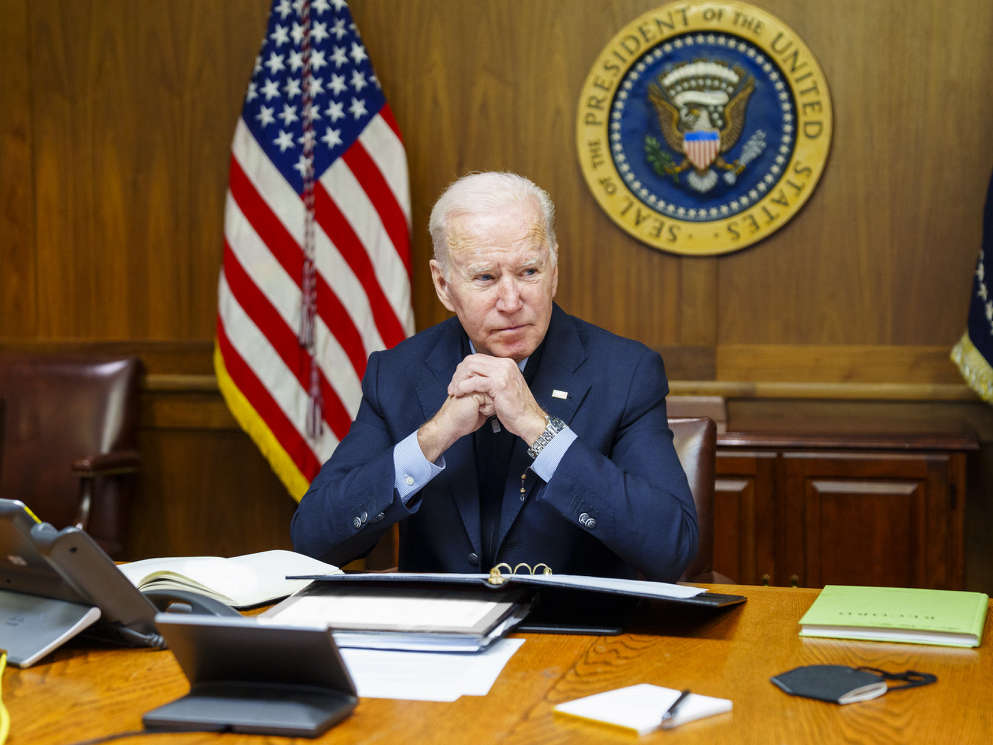 This image provided by The White House via Twitter shows President Joe Biden at Camp David, Md., on Saturday. Biden on Saturday again called on President Vladimir Putin to pull back more than 100,000 Russian troops massed near Ukraine's borders and warned that the U.S. and its allies would "respond decisively and impose swift and severe costs" if Russia invades, according to the White House.

President Biden says the United States will give diplomatic talks aimed at averting a Russian invasion of Ukraine “every chance to succeed.” But he reiterated that Russia will face “powerful sanctions” if it launches a military attack against its neighbor.

In brief remarks at the White House Tuesday afternoon, Biden noted that the Russian defense minister reported that some military units are leaving their positions near Ukraine. Biden said “that would be good” but added the U.S. has not verified that.

“Indeed our analysts indicate that they remain very much in a threatening position,” Biden said. “And the fact remains, right now Russia has more than 150,000 troops encircling Ukraine and Belarus and along Ukraine’s border.”

There was a flurry of diplomatic activity Tuesday aimed at averting a Russian invasion of Ukraine. Biden spoke with French President Emmanuel Macron for about 50 minutes via a secure video conference, according to the White House.

The White House said in a readout that the two leaders “discussed ongoing diplomatic and deterrence efforts undertaken in close coordination with Allies and partners in response to Russia’s military buildup along Ukraine’s borders, including their readiness to impose severe consequences and to reinforce the defensive posture on NATO’s eastern flank.”

German Chancellor Olaf Scholz met with Russian President Vladimir Putin in Moscow. In a news conference afterward, Putin indicated that Russia’s military had begun pulling back some of its troops from the border with Ukraine. And NATO Secretary General Jens Stoltenberg told reporters, “There are signs from Moscow that diplomacy should continue. This gives grounds for cautious optimism.”

But Stoltenberg added, “So far we have not seen any sign of de-escalation on the ground from the Russian side.”

Biden said Americans could feel “the consequences here at home” of a Russian invasion through higher energy prices. He said that he is prepared to use all his power to provide relief at the gas pump. He also vowed that if Russia launches an asymmetric attack on the U.S. in cyberspace, the U.S. will respond.

Meanwhile, efforts in Congress to draft a bipartisan sanctions bill broke down Tuesday, after which a bipartisan group of senators — including Senate Majority Leader Chuck Schumer, D-N.Y., and Senate Minority Leader Mitch McConnell, R-Ky. — issued a statement, warning, “Should Vladimir Putin further escalate his ongoing assault on Ukraine’s sovereignty, Russia must be made to pay a severe price. We are prepared to fully support the immediate imposition of strong, robust, and effective sanctions on Russia, as well as tough restrictions and controls on exports to Russia, and we will urge our allies and partners in Europe and around the world to join us.”

Earlier, House Republicans announced their own proposal, charging Biden had failed to “deter Putin’s belligerence,” and calling for sanctions to be imposed immediately on Russia.

Senate Foreign Relations Committee Chair Bob Menendez, D-N.J., criticized Republicans for “partisan posturing instead of working to reach consensus on a comprehensive bipartisan proposal that would demonstrate a united front to deter Putin from re-invading Ukraine.”