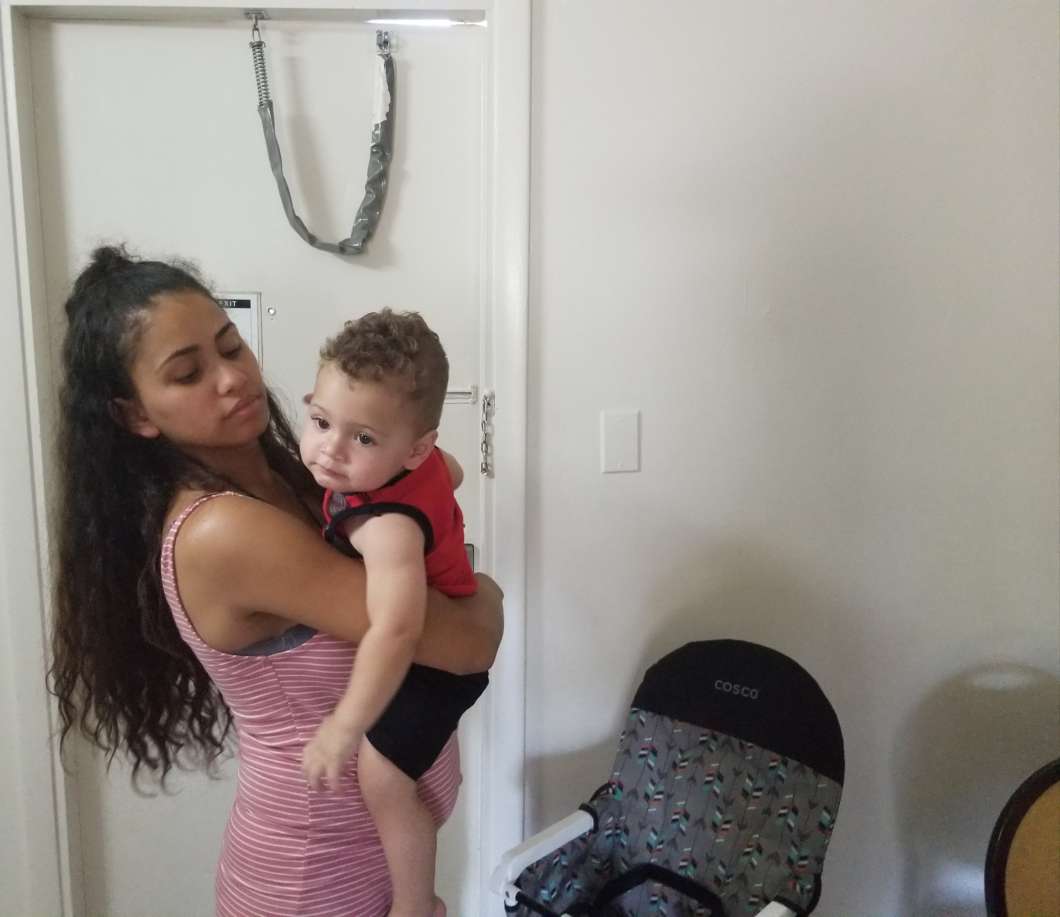 Ariana Colón and her baby Sebastian. Photo by Crystal Chavez.

Ariana Colón doesn’t know where she will be living at the end of this month.

She is one of more than 1,000 families across the country and in Puerto Rico still checked into hotels paid for by Federal Emergency Management Agency. In Florida, there are 324 families getting federal help.

That aid was supposed to end June 30, and has been extended multiple times by a federal judge. Advocates for families receiving Transitional Sheltering Assistance took the case to court, and a federal judge extended the temporary housing until July 23 for Hurricane Maria Evacuees. Colón said two more weeks is not enough time.

Colón’s one-year old Sebastian has his toys in the living room of a Super 8 hotel in Kissimmee. Colón’s boyfriend is a barber. She is 19 weeks pregnant. Colón said they’ve been saving money, but not enough for the costs of getting an apartment.

The young couple has tried to get an apartment. Some charities are offering to help with upfront costs, but Colon said apartments she has visited asked her to prove they make three times the cost of a month’s rent.

“I’ve heard a lot of places that they provide the security deposit, or the last or first month but we have to qualify in order for them to give us the money, which that’s the problem, I don’t qualify,” said Colón.

This is the fifth hotel they’ve stayed in since December because of booking and space issues. FEMA is offering to pay flights back for evacuees who want to return to Puerto Rico.

“When people got here they were received with Florida IDs, so we were received as Florida citizens and why now, you got tired of it and you just gonna send us back?” said Colón.

The couple left the island in the aftermath of the hurricane for the health of their children. “My baby was like five months old by the time, he was suffering a lot with the heat and the mosquitoes, no water,” she said.

They arrived in central Florida, a place already dealing with a lack of affordable housing. Advocates for displaced Puerto Ricans said public housing wait lists can be years long.

Kira Romero-Craft is with the civil rights organization LatinoJustice PRLDEF, formerly known as the Puerto Rican Legal Defense and Education Fund. She is one of the attorneys who filed the lawsuit against FEMA on behalf of displaced families.“Our suit alleges that FEMA acted in an arbitrary and capricious manner by terminating the program without proper notice to the plaintiffs,” she said.

“I think that if we are able to allow the families to remain under the TSA program, as well as open up the other housing opportunities that provide an avenue to more permanent housing for these families, that would be winning,” Romero-Craft said. “Giving them the option to look at what else is out there, to assist, because those programs are there.”

FEMA will not comment on pending litigation. But the agency said the duration of the temporary emergency sheltering program for Maria has been on par with other hurricanes including Sandy (10 months), Matthew (9 months) and Harvey (10 months).

FEMA said evacuees should work with a FEMA case manager to see if they’re eligible for temporary rental assistance in Florida. The agency has also been pointing hurricane survivors to its Direct Lease program. It directly pays landlords to house disaster survivors temporarily in vacant units. This assistance is only available on the island, and more than 250 families have gone this route. In a court filing, FEMA also argues the governor of Puerto Rico decided to terminate the temporary shelter assistance, something the federal court wants more information on.

Colón doesn’t plan to return to the battered island. She is looking for higher paying work as her fast food job was only covering the cost of daycare.

“The conditions are not the same, the healthcare and everything is not the same, so why would I go back to where I came from because of the same circumstances? It doesn’t make sense,” said Colón.

A federal judge has ordered both sides to file a briefing with more information. Then he will determine if another hearing is necessary. He expects to decide that by July 23 — the last day of the program for Maria evacuees.