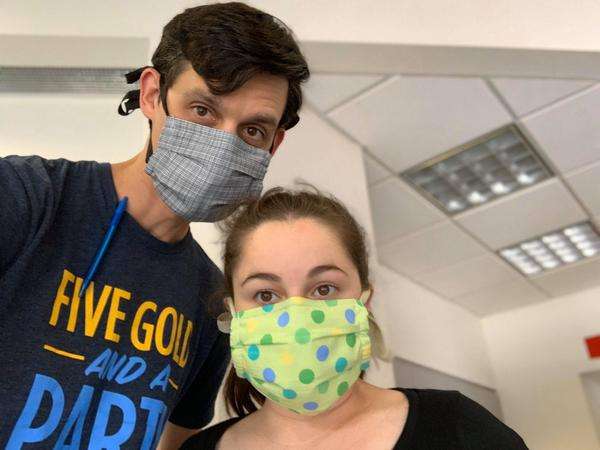 Curt Steckel and Robyn Odegard Steckel are expecting their first child in June. It's not been the pregnancy they planned for. COURTESY ROBYN ODEGARD STECKEL

Pregnancy is supposed to be a magical time for mothers and their families. But it can also be scary, and the coronavirus is making it more so.

More than 40,000 people have tested positive for the coronavirus in Florida and nearly 2,000 have died. But amid the sickness and uncertainty, life goes on; and new life begins.

“Becoming a mom for the first time is this incredible, magical, scary, life-changing experience in and of itself,” said Robyn Odegard Steckel, who is 37 weeks pregnant.

“There’s a lot of feelings of confusion, love, isolation, loneliness, fear, but love, love, love, right, around becoming a mother and then just throw it into a pandemic.”

Odegard had imagined this pregnancy for years, building it up in her head. Then the safer-at-home orders started.

The first time her husband was supposed to hear the baby’s heartbeat, he wasn’t allowed to be at her appointment. Clinics and hospitals are limiting entry to help slow transmission of the virus.

So she recorded the sonogram on her phone while the ultrasound technician narrated what they were seeing.

“I feel bad for him because he missed out on that and there’s nothing he could do,” Odegard Steckel said. “I think he felt helpless in that moment. And it broke my heart.”

And when Odegard Steckel found out she had gestational diabetes, she was devastated Curt couldn’t be at her next appointment to help her process it. So the diabetes specialist made it happen another way.

“So she said, ‘you know, we’re going to do this appointment outside. It’s a beautiful day.’ So we went into a courtyard at Tampa General Hospital, and had an hour-long gestational diabetes, educational consult on a park bench.”

What we know about COVID-19 and pregnancy

According to the Centers for Disease Control and Prevention, it’s not yet known if pregnant women are more likely to be seriously ill with COVID-19.

But expecting mothers do have a higher risk of severe illness with other viral respiratory infections, such as the flu.

The CDC says mother-to-child transmission of coronavirus during pregnancy is unlikely, but after birth a newborn is susceptible to person-to-person spread. The virus has not been detected in amniotic fluid or breast milk – and new mothers are encouraged to breastfeed after washing their hands and breasts – and while wearing a mask.

How some hospitals are handling the pandemic

Dr. Judette Louis is chair at the University of South Florida College of Medicine Obstetrics & Gynecology, and an obstetrician at Tampa General Hospital with a degree in epidemiology. She says hospital policies regarding birth – and everything else – are constantly fluctuating depending on new data, as well as state and federal guidelines.

“We’re literally making it up as we go along, trying to use the best information that we have,” Louis said. “And that’s very scary for us and certainly very scary for the patients.”

Cleaning has been ramped up. Health care providers are wearing more personal protective equipment, although sometimes that equipment is reused because of shortages. Pregnant women are often given separate entrances from other patients. Some appointments prior to birth have been moved to a telehealth format.

TGH has even stopped providing nitrous oxide as a pain management option during delivery over fears it could aerosolize the virus.

And everyone who is admitted to TGH, including pregnant people, are tested for the coronavirus. HCA Hospitals are doing the same.

Still, some mothers are worried and they’re switching to birth centers or opting for in-home births.

Dr. Reut Bardach delivers babies at the Medical Center of Trinity in Pasco County. She said hospitals are still safe places to give birth.

“There is no scenario where I would say I feel like a patient is safer at home than at a hospital, including during this pandemic,” Bardach said.

Hospitals are also now severely limiting who can be in the room during the birth. Pre-pandemic, delivery cheerleading squads often included siblings, parents and in-laws. Now, mothers are limited to one support person and typically choose their spouse. But they are allowed to bring those people into the room virtually through apps.

Understandably, Louis said, they’re upset they can’t carry out their original birth plan. But she said childbirth is a unique subsection of health care that brings many preconceived notions with it.

“Even before COVID-19, that was one of our struggles in the specialty,” Louis said. “Patients come in, and they tell us what they would like it to look like. Whereas our colleagues, they don’t have patients coming in and saying to the cardiologists what their CABG (Coronary Artery Bypass Graft surgery) should look like. They don’t come to their orthopedic surgeon saying what their knee replacement should look like, right?”

Most hospitals have canceled ancillary services like prenatal preparedness classes, infant CPR classes, breastfeeding help, and more, driving parents to other providers, like doulas, who may be offering digital versions.

Birth centers, midwives and doulas are getting more focus

“Such a funny concept: hospitals are for sick people, babies should be born elsewhere,” Duarte said. “I think it’s a funny twist of fate that midwifery is being plunged into such a positive light in this weird time.”

The birthing center is mostly business as usual, but only one client is allowed in the building at a time for appointments and they have to follow stringent handwashing requirements.

And staff are required to wear more PPE than pre-pandemic, which makes it harder to put people at ease.

“We have these face shields that we wear during second stage when the woman’s pushing. I feel like an alien,” Duarte said.

At Breath of Life Women’s Health & Birth Center in Largo, the number of support people allowed in the delivery room hasn’t been limited, said Wendy Morris, their office manager. So it’s still possible to have your parents, partner and spouse all there.

“But we’ve been sure to stress it’s really important to limit the amount of people your baby’s around anyway during this time and usually that’s how it is, even before COVID-19,” Morris said.  “You want to make sure your baby is safe and secure in this outside world now, in general.”

Like the hospitals, they take temperature checks at the door, are limiting foot traffic, and have hand sanitizer stations posted. They’re emailing receipts instead of printing paperwork.

Tanya Grazione, a Tampa area doula, says when her clients aren’t able to bring her in for delivery, she can use FaceTime or Zoom on their phones to answer questions, offer emotional support and guide them through the labor.

“It’s better than nothing. But to be completely honest, it’s not optimal,” Grazione said.

She says her clients’ biggest fear during the pandemic is being rushed through the birth.

“If we just allow women the time to birth without the intervention things go way smoother,” she said.

The loss of in-person support systems and pregnancy milestone celebrations

Beyond fearing the virus itself, pregnant people are lamenting the milestones they’ll miss. The baby showers with the silly games, their loved ones touching their growing bellies. All the opportunities for photos to show their child how much they were loved before they came into the world.

So they’re turning to virtual means to help fill that void.

Cori Lynn Duarte at Labor of Love Birth Center said the biggest concern for mothers right now is their mental health. She said depression was already an issue in the pre-pandemic world and social isolation will exacerbate it.

“It takes a village to raise a baby,” Duarte said. “And in those first days and weeks in the fourth trimester, after you have a baby, if you don’t have the support, the statistics are so much higher that you’ll suffer from postpartum depression.”

Mandy Swain in Tampa is six months pregnant, and laments the opportunity for her students to see her growing belly.

“Now they see me on a computer screen so it’s from the chest up, so they, they probably don’t feel like there’s any difference anymore unless I stand up in the lesson,” Swain said. “But for me just having all of those milestones and sharing them with the people around you. I feel like that is kind of diminished.”

Shaina Gonzalez in Land O’ Lakes is 18 weeks pregnant with her third child and since her friends and family couldn’t be there for an in-person gender reveal, she filmed her son and daughter opening a cardboard box.

In a video recorded on Shaina Gonzalez’s phone, a little girl in pigtails and a little boy wearing a clip-on tie stand beside a cardboard box that says “He or She? What will it be?”

Samantha and Kenny untape the box. Blue balloons float out. Kenny is thrilled. Samantha, not so much.

“I wanted a girl but it doesn’t matter because Mommy told me to be happy.”

Just three months ago, this gender reveal video would have been filmed with several friends and family cheering on beside the kids. But thanks to coronavirus safer-at-home orders, only Gonzalez’s immediate family could be at their Land O’ Lakes home.

“It was pretty much just a 20-minute, ‘here’s what we got you and thanks’,” Gutierrez said. “And it just felt kind of sad.”

Robyn Odegard Steckel said she’s already given herself time to grieve those losses. But says at least it’ll make for an interesting story someday for her child.

“We’ll just have to tell our baby, ‘Hey, this was a weird time. We did this. We laughed. We had fun with our family. But we did it over the internet’,” Odegard Steckel said.

Now she’s focused on gratitude for the technology that allows her to feel a little closer to her friends and loved ones inside the safety of her home.