Predicting The Weather At The National Weather Service Melbourne 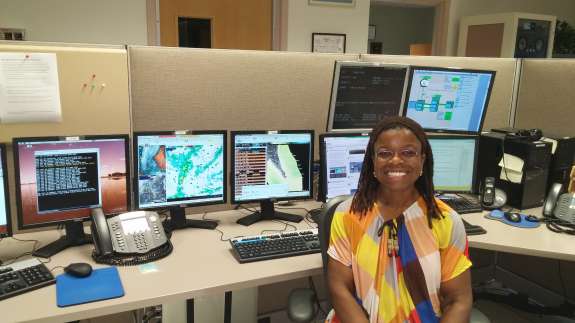 Meteorologist Arlena Moses sits at one of the forecasting stations at the National Weather Service Melbourne field office.

Tucked away at the end of a residential neighborhood is the National Weather Service’s Melbourne Field office. It’s a non-descript concrete building with tall and thin tinted windows. The only thing that gives it away as something more than an office building is a towering radar dome that sits a few yards away from the office.

Inside is Arlena Moses. She’s a meteorologist with the National Weather Service, and handles the tropical storm division of the office.
This field office is one of the first – established in 1990 – as a way to monitor local weather and the local impact storm systems will have on east Central Florida. “So this is our operations floor. There’s six workstations that we have, where each of the forecasters sit, we always have two meteorologists on – 24/7,” said Moses.

She walks over to one of those stations. There are eight computer screens – each with data constantly streaming in. Wind speeds, radar, satellite imagery and communications with offices in Miami and Tampa.

Meteorologists use all this data to determine what areas are most at risk for flooding  or wind damage  when a storm comes it. But with all this data, how do forecasters actually predict storms?

“The atmosphere is essentially like water, like fluid. And there are equations on how that fluid is moving and taking that out into the future,” explains Moses. Essentially, the sky is like a big ocean above our heads and forecasters apply fluid dynamics to predict storms.

“Think of it the same way we look at waves we look in the ocean, or sink or bathtub, it’s the same way the atmosphere is. We’re looking at how waves move across. How each ripple impact aspects of the weather,” said Moses.

When it comes to forecasting hurricanes, meteorologist pay particularly close attention to the Eastern Pacific. Called The El Nino Southern Oscillation – or ENSO – the temperature of these waters of the Western Coast of South American have an impact on the tropical hurricane season.

When the waters are warm, we’re in the El Nino phase, which for the Atlantic coast means “a suppressed hurricane season because of additional wind shear in the atmosphere. What that essentially means is all those tropical waves, that we see coming off the African coast in the summer, rather than having a chance to grow their being ripped apart,” Moses said.

So does a slow season outlook mean forecasters get to kick their feet back and relax this summer?

“Oh, absolutely not!” exclaims Moses.  “One interesting analog year that has come up many times is 1992. For anyone that’s been a long-term resident of Florida knows 1992 was Andrew.”

Andrew was one of only three Category five hurricanes to make landfall in recorded history – and that was predicted to be a suppressed season.