Disturbance in Caribbean Not Yet a Tropical Storm, NHC Says 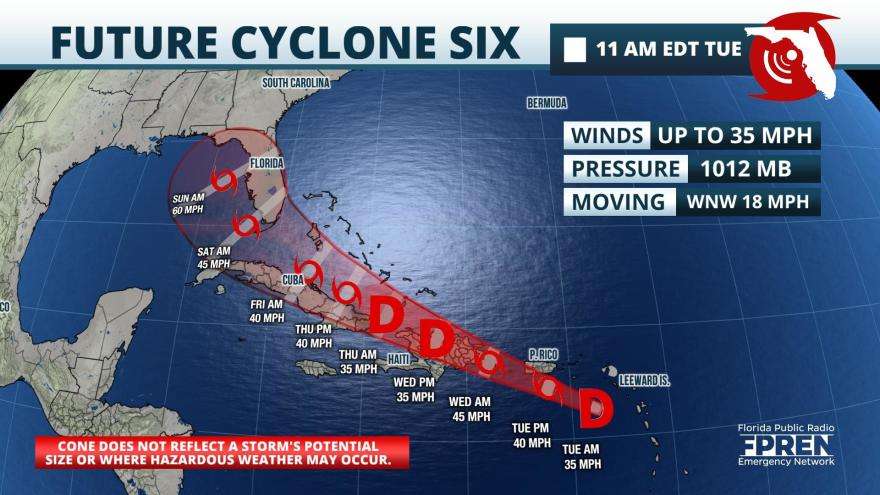 Update as of 11 am Tuesday:

The National Hurricane Center (NHC) says satellite and radar data indicates PTC 6 is producing winds of tropical storm strength. However, hurricane hunters have not been able to find a closed low-level center of circulation. Therefore, the system is still not officially a tropical storm. No significant changes in strength or forecast track were noted in the 11 am EDT advisory from the NHC.

Potential Tropical Cyclone 6 is close to becoming the season’s sixth named tropical storm in the Caribbean, and may cause direct effects over a portion of Florida over the upcoming weekend.

The strong tropical wave is moving rapidly west-northwestward near 17 mph through the eastern Caribbean Sea, some 330 miles from Ponce, Puerto Rico. It passed through the southern Leeward Islands, not far from Guadeloupe, during the early morning hours of Tuesday. Tropical Storm Warnings were issued for the island, the U.S. Virgin Islands, and the Dominican Republic ahead of what’s expected to be a tropical storm later Tuesday. Tropical Storm Watches are now in effect as far west as Haiti, the Turks and Caicos Islands, and the southeastern Bahamas.

Light upper-level winds and warm water temperatures are likely to favoring strengthening Tuesday into Wednesday morning. However, it is likely to pass near the mountainous island of Hispaniola later Wednesday morning and afternoon, and should be close to Cuba Thursday and Thursday night. These islands will disrupt the circulation and are likely to cause some weakening or prevent additional strengthening, at a minimum, as it passes near these islands.

An upper-level trough of low pressure over the Bahamas is expected to impart southwesterly wind shear over the system Thursday and Friday. Most computer models forecast this upper low to move into the eastern Gulf of Mexico and weaken somewhat this weekend and early next week. Still, it is likely to cause south or southwesterly wind shear over top of the developing tropical cyclone, which should prevent the disturbance from becoming too intense.

If it reaches the warmer waters of the Gulf of Mexico, which presently appears likely, then the system could strengthen early next week even with wind shear working against it. There is a low chance of tropical storm force winds over South Florida, but if they do occur, they would first arrive late Friday night or Saturday morning. An increase in rain chances appears probable this weekend, regardless of the storm’s strength. It is too soon to predict whether other areas in Florida may experience wind or rain from this developing system.

The National Hurricane Center is not presently outlining any other areas in the tropics for development. However, some computer models are forecasting an uptick in activity over the next couple of weeks coinciding with the climatological peak of hurricane season and a favorable pattern unfolding over the Atlantic Ocean.