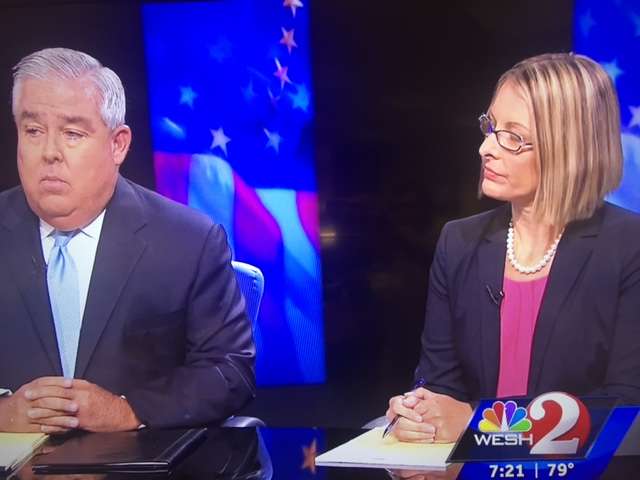 The debate, hosted by WESH Channel 2, lasted 30 minutes. Florida voters will decide whether to legalize full-strength medical marijuana this November.

Moderator Adrian Whitset asked Morgan about the argument that Amendment 2 would be defacto legalization of recreational marijuana. Whitset said if there’s more marijuana out there, more people will be using it.

The moderator asked about recent Drug Free Florida’s ads claiming pot candy will be marketed to kids. Whitset asked if it was “fear mongering.”

“I wish it was fear mongering, but unfortunately, it’s accurate,” Spencer said. “To use one of Mr. Morgan’s favorite terms, Google it. The EdiPure, it says medical on it. This is exactly what we see in other states with quote medical marijuana. And the amendment specifically says edibles.”

Check here for a primer on Florida’s medical marijuana amendment

Ads have said Florida’s medical marijuana law will not allow doctors to write prescriptions. Doctors would face losing their license for prescribing a schedule 1 narcotic, which legally has “no accepted medical use.”

“Why is it a schedule one drug?” Morgan asked. “Years ago there was a movie called Reefer Madness, which stood for the proposition that a black man and a white woman might get together. So you know what they did? They made it a schedule 1 drug so we can’t even study it.”

While it’s true that doctors would risk their license to practice medicine by prescribing a schedule one drug, marijuana is studied by researchers. But it requires significant oversight by multiple federal agencies.

See below for tweets from during the debate:

Jessica Spencer: “This is a constitutional amendment. They need to be perfect. This isn’t perfect.”#mmj #Amendment2

Jessica Spencer on #mmj: “This is a predatory amendment. It preys on our compassion.”

Jessica Spencer: “If big pharma wanted (medical marijuana) this they would have done it already.” #mmj @WESH #Amendment2

Jessica Spencer on ad that medical marijuana will be packaged like candy, marketed to kids: “I wish it was fear mongering.” #mmj @WESH

On “prescribing” of medical marijuana: You can’t prescribe it. It’s a schedule one. If doc prescribes, they would lose license. #mmj @wesh

.@JohnMorganESQ “I’m an old guy. I’m an old fat guy. If I wanted it (marijuana), I could get it in five minutes.” #mmj #Amendment2

@JohnMorganESQ Thank you for presenting factual info about Amendment 2 & standing up for those of us who needlessly suffer. #YesOn2