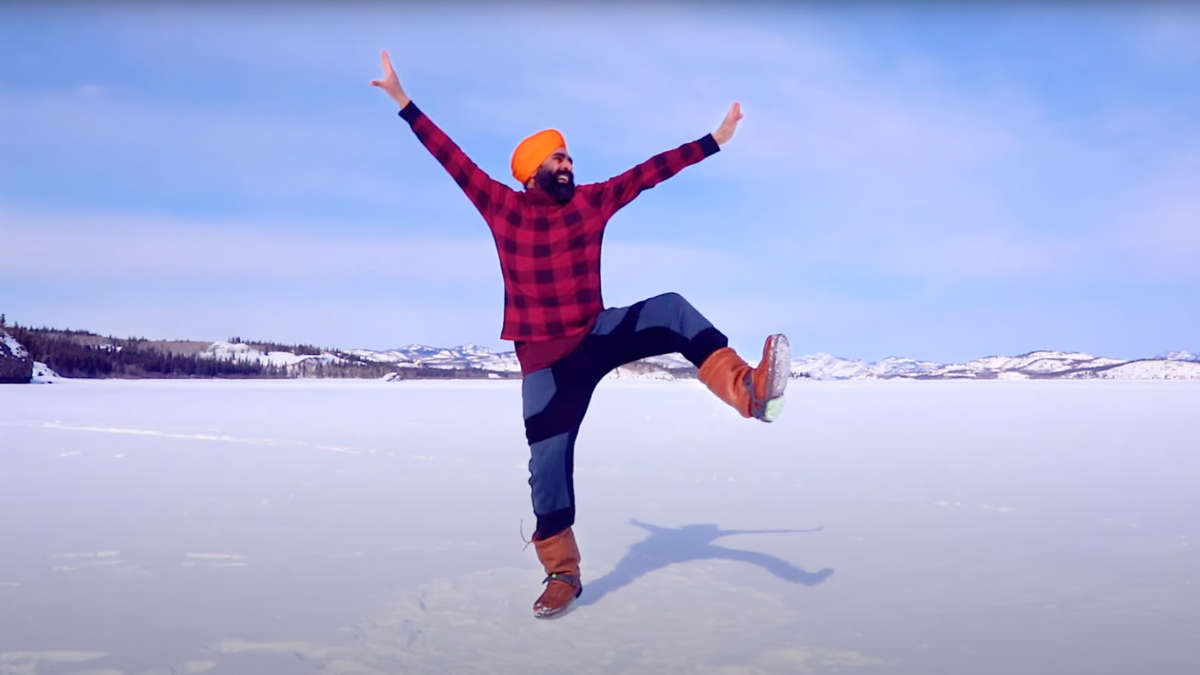 He got his two doses of a COVID-19 vaccine. And each time, he danced on a frozen lake to celebrate.

That’s how Gurdeep Pandher marked his vaccine milestone. By doing the bhangra, a traditional dance that originated in Punjab, India, on an iced-over lake in Canada’s Yukon territory.

His first video drew more than 3 million views on YouTube and Twitter And now he’s done it again after dose number 2.

Pandher is part of a growing wave of vaccine celebrations via social media. But all this online joy does raise a nagging question: How can people be so happy when much of the world doesn’t have any access to a vaccine at all? Before we get to that point, let’s look at some of the creative ways in which people are announcing their vaccinations.

On March 22, Evan Manivong, a member of the University of Illinois’ men’s gymnastic team whipped out a white card after achieving a career high score in his successful routine during a meet against Minnesota. People wondered what the white card was all about. He tweeted that it was his vaccination card and urged everyone to get their jab. The tweet has gone viral.

Then there’s the woman who got her vaccine wearing her wedding dress. Her reception was canceled due to the pandemic, so Sarah Studley donned her white gown to get vaccinated at a Baltimore stadium. The University of Maryland Medical System tweeted out photos of her receiving her shot with the announcement, “here comes the bride,” Studley told People magazine that she was turning “lemons to lemonade” by saying yes to both the vaccine and the dress — and had no idea that her bridal garment would bring joy to others too.

Even my parents got in on the act.

On a bright humid morning on April 10, they left home together on one of those rare outings since the pandemic began. They were due for their second vaccine shot at Bloom, a private hospital in the city.

Ranee, my mother is a 59-year-old home-maker and my father, Chidambaram Valliappan, 66, runs a movie theater called Kamala Cinemas, a family business in the southern Indian city of Chennai.

For businesses across India, it had been a tough year. For movie theater owners, the pandemic was particularly crushing. Theaters across India were shut down, leading to furloughs and financial losses.

After over a year of ordering groceries and essentials online, giving up a gym membership to exercise on their rooftop terrace and worrying about their elderly parents, relatives and employees, my parents say they were deeply struck by the significance of what they were about to do.

“The moment I got that jab, I felt pure joy,” Ranee says. “It gave me hope that we could overcome this.”

India has reported administering 100 million vaccine doses, but with a second wave of infections hitting hard, reaching the unvaccinated is more urgent than ever.

“Like voting, I think getting vaccinated in these times is a civic duty. It’s the best thing you can do for yourself and your community,” Valliappan says.

After they got their shots, they celebrated by taking a picture at a selfie booth at their vaccination center. “It felt right to celebrate that moment,” says Valliappan. “We’ve been sending that photo to friends and family, urging them to get vaccinated too.”

As for the question of whether a celebratory tweet would somehow be seen as insensitive by those in countries where vaccination just isn’t happening on a wide scale, here’s what public health officials have to say.

Limaye has studied vaccine hesitancy—the reasons why people are wary about taking any vaccine. “These social media moments do help — we’ve seen hesitancy decrease since the start of the pandemic because expressing gratitude for the vaccine helps shift people’s opinions.”

It’s a kind of positive peer pressure, says Dr. Chandrakant Lahariya, epidemiologist and public health expert based in New Delhi. He’s also co-author of the book Till We Win: India’s Fight Against The COVID-19 Pandemic. “On one end, there are people who accept all vaccines. On the other end, there are people who refuse any vaccine, no matter what evidence we provide. Between these two groups, there are a large proportion of people who are indecisive. They haven’t made up their mind, either way.”

It is this group, he says, which is likely to be influenced by social media posts. “I believe that such videos, images and social media nudges definitely helps many arrive at a decision. A happy person after vaccination can allay some fear and is always helpful from a social science perspective.”

These moments expressing gratitude are important to help “normalize” the COVID vaccine, says Limaye. “I personally think that vaccines are a miracle product and we’re finally waking up to its power in preventing disease,” she says.

One of Limaye’s favorite vaccine moments on social media was a tweet from a broadcaster about her mother being prescribed a hug by her doctor after having taken the vaccine.

“First hug she’s had in a year. Thank you to all the scientists and doctors who made this happen!” tweeted Jessica Shaw, referring to her mother.

But COVID has also laid bare disparities and structural inequality that have always existed, says Limaye. Many lower and middle-income countries struggle to access vaccines, even as wealthier nations stockpile more than they need.

Vaccination in Nigeria, for instance, started slowly, says Ifeanyi Nsofor, director of policy and advocacy at Nigeria Health Watch and a senior New Voices fellow at the Aspen Institute. In a country of two million people, [population is 201 million per internet] so far a million have been vaccinated. “Now we are not sure when the next batch will come,” he says. But even then, it doesn’t bother him to see other people celebrate on social media.

“The world is a global village and we are more interconnected than we realize,” says Nsofor. “So, when people share their experiences of getting vaccinated with COVID-19 vaccine, to me it is inspiring. I don’t resent that because I know someone could be inspired to get vaccinated because of others sharing their experiences.”