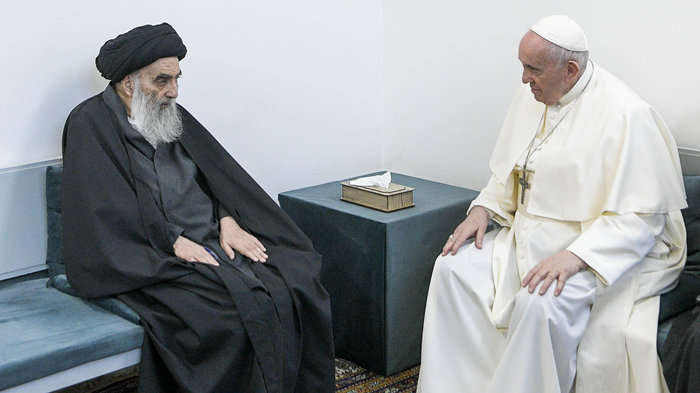 Pope Francis sought to reinforce ties across religions during the second day of his trip to Iraq, visiting a top Shiite Muslim cleric on Saturday and leading a meeting with representatives of different faiths at the ancient site of Ur in the south of the country.

According to scripture, Ur is the birthplace of Abraham, considered the founder of monotheism and revered by Christians, Muslims and Jews. In a ceremony that gathered a few dozen people next to an excavated part of the ancient city site Iraqis call the House of Abraham, Francis recalled a passage in Genesis where God calls on Abraham to look at the stars and imagine how numerous his descendants will be.

“In those stars, he saw the promise of his descendants, he saw us,” said Francis. The pope invited the assembled Christians, Muslims and representatives of Iraq’s other minority faiths — including Yazidis and Sabean Mandeans — to see in the stars a message of unity.

“They illumine the darkest nights because they shine together,” said Francis.

The event, which was held close to the poor, majority Muslim city of Nasiriyah, has been eagerly awaited.

“It’s a dream that it will happen,” said one of the attendees, Maher Shakir Tobya, one of few Christians living in the area. “I think this dream will happen only once. Maybe our children, and grandchildren will never see an event like this.”

Speaking after the ceremony, site director Ali Kadhim said he could not fully express his happiness about how successfully the visit went. He said the pope’s message to the world was that, “Iraq is not a country of war … the opposite, Iraq is united, living together with all religions.”

Earlier in the day, the pope traveled to the city of Najaf, considered especially holy for Shiite Muslims, to meet the Grand Ayatollah Ali al-Sistani. The top Shiite Muslim cleric in Iraq is also respected by hundreds of millions of Shiite Muslims worldwide.

Footage released by the foreign ministry showed the pope walking down the narrow alleyway in Najaf to the rented house which the cleric rarely leaves. Photographs of the meeting showed an austere room, in marked contrast with the lavish presidential palace where the pope addressed dignitaries on Friday.

The audience was private, but Sistani’s office released a statement afterward saying that he spoke about the need for religious leaders to urge all sides, especially superpowers, to let the language of reason and wisdom prevail over the language of war.

The pope is set to celebrate mass this evening at a Chaldean Catholic cathedral in Baghdad. On Sunday he is scheduled to fly north to the city of Erbil.

He will visit Mosul and a town on the Nineveh Plain retaken from ISIS, after the militants seized the area in 2014. Many churches were burned, and mostly-Christian villages emptied out. Some have returned, but many are seeking to leave the country. It can be easier for Christians to find asylum elsewhere than Muslims.

The pope has emphasized the value of Iraq’s religious and cultural diversity throughout the trip, and priests in different areas of Iraq say they hope he will encourage Iraqi Christians to stay in the country despite the difficulties.