Pope Francis: ‘Many Tears This Christmas’ 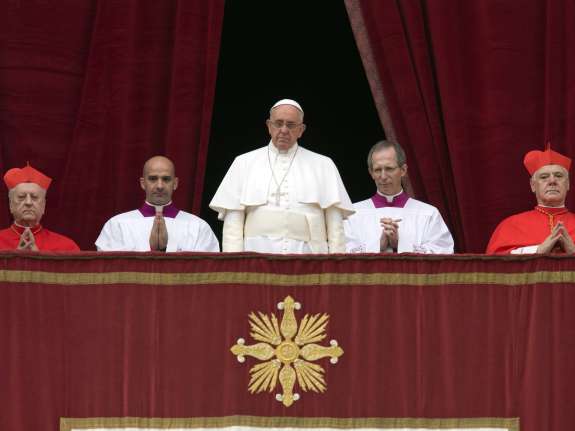 Pope Francis delivers his "Urbi et Orbi" (to the city and to the world) blessing from the central balcony of St. Peter's Basilica at the Vatican, on Christmas Day.
Image credit: Alessandra Tarantino

Pope Francis, in his Christmas Day blessing in St. Peter’s Square, denounced the “brutal persecution” of religious and ethnic minorities and condemned conflicts in Ukraine, Libya and elsewhere.

It was his second “Urbi et Orbi” (“to the city and to the world”) message since becoming pope last year, the pontiff also lamented the deadly Taliban attack on a school in Pakistan that killed 149 people, mostly children, and the deaths of thousands due to Ebola in West Africa.

“Truly there are so many tears this Christmas,” he said.

At one point in the address, Francis, 78, departed from his text to lament that so many children “are victims of violence, made objects of trade and trafficking.”

He urged Ukraine, which is locked in a Moscow-backed separatist conflict, to “overcome tensions and conquer hatred and violence.”

On the violence in Syria, the pope invoked “the Savior of the world, to look upon our brothers and sisters in Iraq and Syria.

“[For] too long now [they] have suffered the effects of ongoing conflict, and … together with those belonging to other ethnic and religious groups, are suffering a brutal persecution,” he said.

“May Christmas bring them hope, as indeed also to the many displaced persons, exiles and refugees, children, adults and elderly, from this region and from the whole world.”

The blessing follows the pope’s Christmas Eve Mass in St. Peter’s Basilica, but his words were carried on a phone line to Iraqi refugees who had been forced to flee their homes because of an a assault by Islamic State militants in northern Iraq.

“You’re like Jesus on this night, and I bless you and am close to you,” Francis told the refugees, at a camp near the northern Iraqi city of Irbil, according to the audio of the call provided by TV2000. “I embrace you all and wish for you a holy Christmas.”