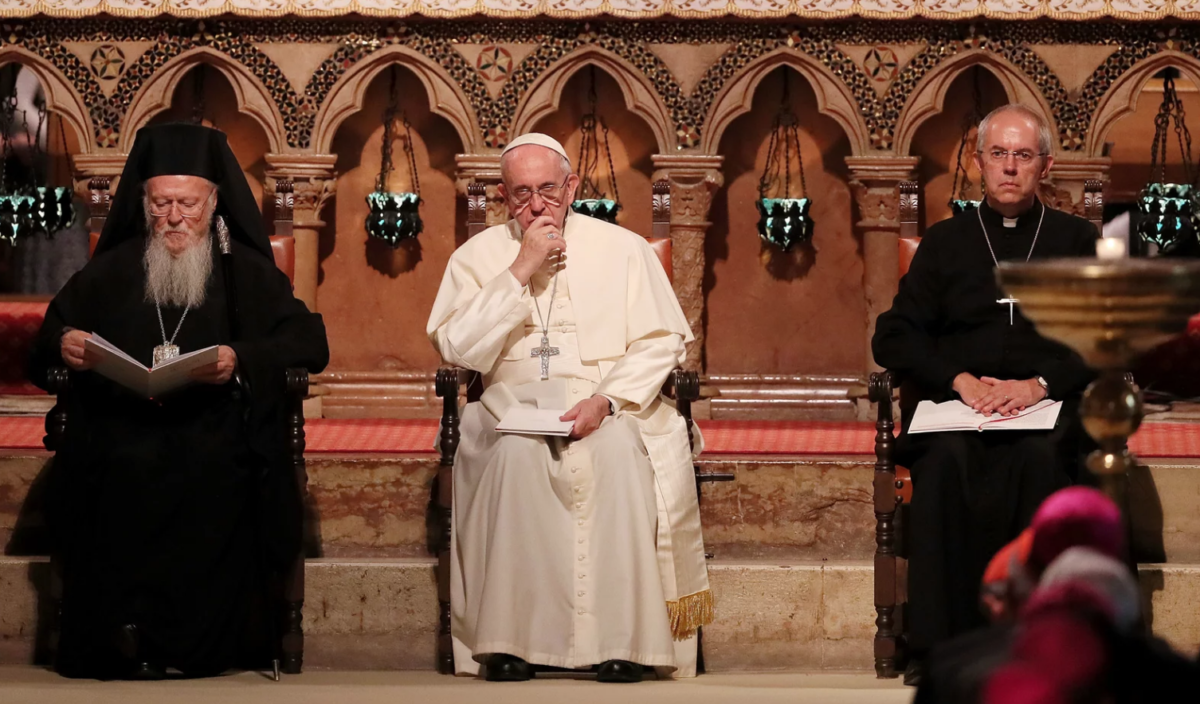 The leaders of three prominent Christian denominations issued an unprecedented joint statement calling on people of all faiths to take action to halt the devastating impacts of climate change.

The statement from Pope Francis, Archbishop of Canterbury Justin Welby and Orthodox Ecumenical Patriarch Bartholomew — who collectively minister to more than a billion-and-a-half Christian faithful — comes as the world’s political leadership prepares for a major United Nations conference on climate change, COP26, scheduled for early November in Scotland.

“September is celebrated by many Christians as the Season of Creation, an opportunity to pray and care for God’s creation,” the letter said. “As world leaders prepare to meet in November at Glasgow to deliberate on the future of our planet, we pray for them and consider what choices we must all make.”

The statement by the clerics arrives on the heels of a major report from the United Nations’ climate science body that warned climate change is accelerating and is almost entirely driven by human activity. It also adds to a diverse chorus of people demanding bolder action on climate change, at a time when research shows that deep cuts must be made in fossil fuel use to avert the worst effects of climate change.

On Monday, more than 200 of the world’s leading medical and health journals issued an unusual joint statement calling climate change the biggest threat to public health, not the pandemic.

The religious leaders also give special attention to the poor in the statement, who they note have made the least contribution to the greenhouse gas pollution that drives climate change but bear “the most catastrophic consequences.”

“We call on everyone, whatever their belief or world view, to endeavour to listen to the cry of the earth and of people who are poor, examining their behaviour and pledging meaningful sacrifices for the sake of the earth which God has given us,” the message said.

In the United States, the world’s largest historic emitter, Congress is currently considering the nation’s most expansive climate proposal ever: a $3.5 trillion dollar plan that Senate Majority Leader Chuck Schumer (D-N.Y.) says would put the U.S. nearly on target to reach its 50 percent emissions reduction goal by 2030.

Whether that legislation can pass could come down in part to a compromise between two prominent Catholic politicians: President Joe Biden, who views the plan as a centerpiece of his political legacy, and Sen. Joe Manchin, a conservative Democrat from West Virginia who last week called for a “strategic pause” on the legislation in a Wall Street Journal opinion piece.

Manchin, who says he is concerned about the scale of recent government spending, told CNN this summer that he’s “very, very disturbed” by the climate measures in the bill which he worries will eliminate fossil fuels.

“If they’re eliminating fossils, and I’m finding out there’s a lot of language in places they’re eliminating fossils, which is very, very disturbing,” he said, “because if you’re sticking your head in the sand, and saying that fossil has to be eliminated in America, and they want to get rid of it, and thinking that’s going to clean up the global climate, it won’t clean it up all.”

“If anything, it would be worse,” Manchin said.

The science on climate change says otherwise. In a study published in Nature this week, researchers warn that fossil fuel producers should avoid extracting at least 90% of coal reserves and 60% of oil and gas reserves by 2050 in order to limit global temperature rise to 2.7 degrees Fahrenheit.

Even then, the planet has a 50% chance of exceeding that level of warming. The Earth has already warmed about 2 degrees Fahrenheit since the mid-1800s, when the use of fossil fuels boomed with growing industrialization.

West Virginia is the second-largest U.S. coal producer and relies on the fuel for 91 percent of its energy needs. The energy sector accounts for six percent of the state’s employment, compared to a national average of roughly two percent.

As NPR has previously reported, the fastest way to cut U.S. emissions is likely through transforming the way the country generates electricity by moving away from fossil fuels, including coal and natural gas, toward renewable and zero-emissions sources.

On Wednesday, the Biden administration released a blueprint for generating 40% of the nation’s power needs through solar by 2040, up from three percent today. Such a dramatic transition would require government action like the president’s $3.5 trillion proposal.

In the joint letter’s conclusion, the religious leaders reiterate their plea to business and government leaders by quoting scripture: “To whom much is given, much is required.”

Biden, a lifelong practicing Catholic, has readily acknowledged the role religious leaders have played in spurring action on climate change.

In May, John Kerry, the administration’s climate envoy, travelled to the Vatican to meet with Pope Francis, who he called a “compelling moral authority on the subject of the climate crisis.”

Kerry, who is also Catholic, said that he hoped the pontiff’s advocacy could “push people to greater ambition to get the job done.”

Getting Biden’s climate proposal done, though, will require the support of all 50 Democratic senators, including fellow Catholic Manchin.

Senator Manchin’s office did not respond to multiple inquiries by NPR asking for his reaction to the Pope’s call for climate action.

One other Democratic senator, Kirsten Sinema of Arizona, has also signaled that she will not support the package. Sinema is the only member of Congress to identify as “religiously unaffiliated.”