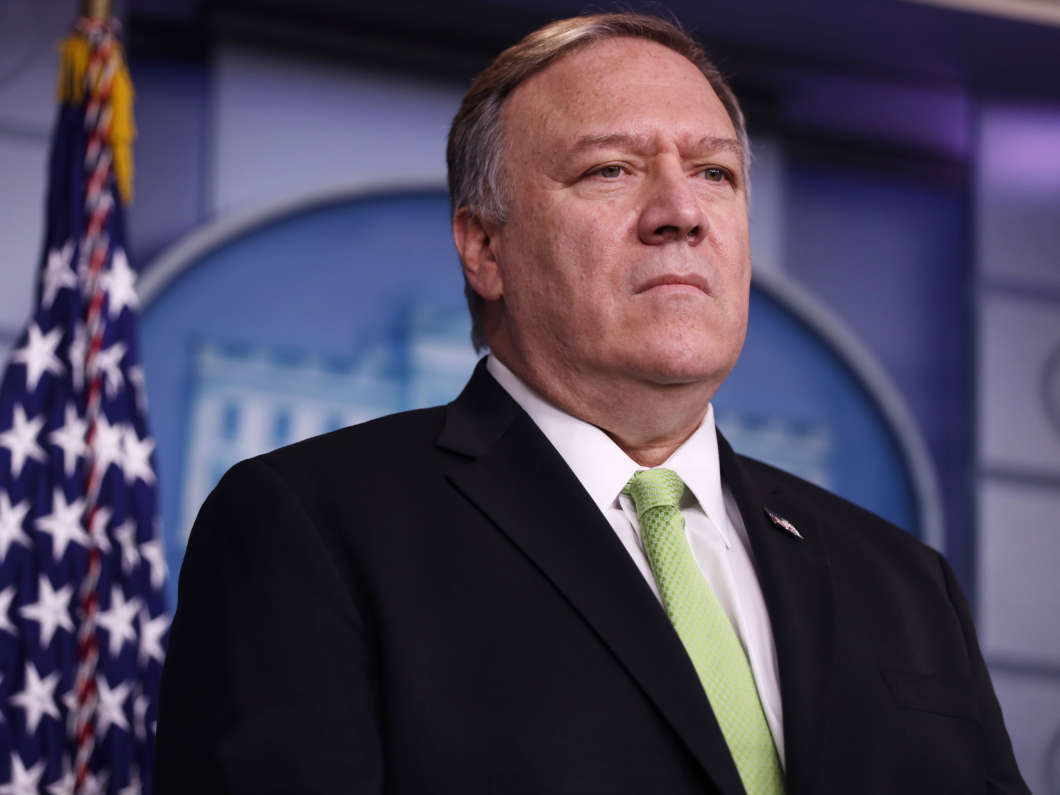 Secretary of State Mike Pompeo was not receptive to being asked about his support of former Ambassador to Ukraine Marie Yovanovitch.
Image credit: Alex Wong

With the State Department facing continued questions over the treatment of Marie Yovanovitch before she was recalled as U.S. ambassador to Ukraine, Secretary of State Mike Pompeo would not say on Friday whether he owed the career diplomat an apology.

Pressed on whether he could point to specific remarks in which he defended Yovanovitch, Pompeo responded, “I’ve said all I’m going to say today. Thank you. Thanks for the repeated opportunity to do so. I appreciate that.”

The exchange with Mary Louise Kelly, co-host of All Things Considered, follows the release by House Democrats last week of messages suggesting that Yovanovitch may have been under surveillance in the days before she was told to return to Washington from her posting in Kyiv last year.

The messages were sent between Robert Hyde, a Republican congressional candidate and fervent Trump supporter, and Lev Parnas, an associate of President Trump’s personal attorney Rudy Giuliani. He was indicted in October on campaign finance charges.

Parnas has emerged as a central figure in efforts by Giuliani to pressure the government of Ukraine to investigate political rivals of Trump. That campaign is now the focus of the ongoing impeachment trial against Trump in the Senate.

Possible surveillance of a U.S. ambassador

The State Department itself is now investigating the possible surveillance of Yovanovitch, who during testimony before House impeachment investigators in November said she had felt threatened by Trump. Before her recall, Yovanovitch had been accused of disloyalty by allies of the White House, and during his now-infamous July 25 call with Ukraine’s President Volodymyr Zelenskiy, Trump said of Yovanovitch, “She’s going to go through some things.”

In an interview last week with the conservative radio show host Hugh Hewitt, Pompeo said he “never heard” that Yovanovitch may have been under surveillance. In her testimony before the House, Yovanovitch said she was told by the State Department that she was being recalled because of concerns about her “security.”

Pompeo has come under criticism — including, at times, from career diplomats in his own department — for failing to more forcefully defend Yovanovitch in the face of political attacks. During testimony before impeachment investigators, for example, Michael McKinley, a former senior adviser to Pompeo, said he resigned from the department in part over what he interpreted to be a “lack of public support for Department employees.”

“I’m not going to comment on things that Mr. McKinley may have said,” Pompeo said on Friday. But he dismissed the suggestion that a shadow foreign policy involving Ukraine was in place.

“The Ukraine policy has been run from the Department of State for the entire time that I have been here, and our policy was very clear,” Pompeo said.

Immediately after the questions on Ukraine, the interview concluded. Pompeo stood, leaned in and silently glared at Kelly for several seconds before leaving the room.

A few moments later, an aide asked Kelly to follow her into Pompeo’s private living room at the State Department without a recorder. The aide did not say the ensuing exchange would be off the record.

Inside the room, Pompeo shouted his displeasure at being questioned about Ukraine. He used repeated expletives, according to Kelly, and asked, “Do you think Americans care about Ukraine?” He then said, “People will hear about this.”

The State Department did not immediately respond on the record to NPR’s request for comment.

The U.S. and Iran

The interview began with a series of questions about the Trump administration’s policy toward Iran. Pompeo defended the president’s “maximum pressure” campaign against Tehran, saying it is “absolutely working.”

“This is a regime that has been working to develop its nuclear program for years and years and years. And the nuclear deal guaranteed them a pathway to having a nuclear program,” Pompeo said in reference to the international agreement signed by Iran, the U.S., the United Kingdom, China, France, Germany, Russia and the European Union in 2015. “It was a certainty. It might have been delayed for a month or a year or five or 10 years, but it guaranteed them that pathway. This administration has pulled the Band-Aid off.”

As the nation’s chief diplomat, Pompeo has played a central role in shaping the president’s more aggressive posture toward Iran. It’s a policy Pompeo has described as “reestablishing deterrence.”

The policy has taken many forms. Less than two weeks after Pompeo was sworn in as secretary of state in 2018, Trump announced the withdrawal from the Iran nuclear deal. The announcement was followed by the reinstatement of steep economic sanctions against Tehran.

Under Pompeo, the State Department has also designated Iran’s Islamic Revolutionary Guard Corps as a foreign terrorist organization, the first time the U.S. has given that label to the branch of another government.

Yet perhaps no action has been more controversial than the administration’s decision this month to launch the drone strike that killed Maj. Gen. Qassem Soleimani, the leader of Iran’s influential Quds Force, outside the airport in Baghdad. While the administration has declined to offer specifics about the intelligence that prompted the strike, Pompeo has defended the president’s order, saying it was carried out in response to an “imminent threat” of attack on U.S. embassies.

For days, the killing revived fears of an all-out war. Iran retaliated with strikes against two bases housing American troops in Iraq. No Americans died in the attack, though the U.S. military later revealed that 11 service members were injured.

Tensions have since eased, but the episode has renewed questions about whether the president’s “maximum pressure” campaign has emboldened Tehran. Since Trump pulled out of the nuclear deal, Iran has shot down a U.S. drone, targeted oil tankers in the strategic Strait of Hormuz, and been blamed for a debilitating attack on Saudi oil facilities.

At the same time, Iran has stepped away from key provisions of the nuclear deal. In an interview this month with NPR, the country’s foreign minister, Mohammad Javad Zarif, said “all limits” on centrifuges used to enrich uranium “are now suspended.”

“He’s blustering,” Pompeo said in Friday’s interview. “This is a regime that has never been in the position that it’s in today.”

The secretary declined, however, to detail specifics of the administration’s policy for preventing Tehran from acquiring a nuclear weapon, saying only, “We’ll stop them.”

Pompeo would not say whether direct U.S. engagement is taking place with Iran but did say the administration has built a coalition that’s working to put pressure on Iran to end its missile program, its processing of uranium and the reprocessing of plutonium.

He said the U.S. has also “raised the cost” for Iran’s use of force through proxy groups in the Middle East.

“This is beginning to place real choices in front of the Iranian regime,” Pompeo said. “You can see in the protests inside of Iran. You can see the Iranian people not happy with their own government when they have to raise the fuel cost. All the things that are undermining this regime’s ability to inflict risk on the American people are coming to fruition as a direct result of President Trump’s strategy.”

He would not comment on whether a new deal is being developed in order to prevent Tehran from acquiring a weapon, but instead said, “The economic, military and diplomatic deterrence that we have put in place will deliver that outcome.”

“The Iranian leadership will have to make the decision about what its behavior is going to be,” he said.