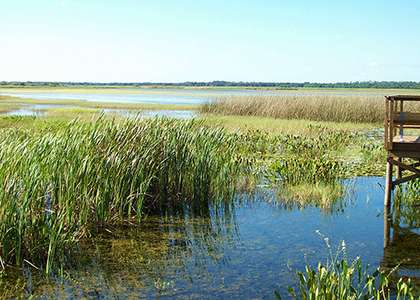 Down in Yeehaw Junction in Osceola County, there are only a handful of businesses visible from the main road—a fruit stand, two gas stations and the Desert Inn motel. Trucks and cars speed down State Road 60, bypassing the small town. Inside the Desert Inn, Sharon Richardson serves a couple people at the bar.

She’s still undecided about who she’ll vote for, but she knows how she’ll vote.

“Me personally myself, a mail-in ballot,” Richardson said. “But I mean, to each his own.”

Yeehaw Junction’s nearest polling place is in Kenansville, another small town about 15 miles north with about 350 voters. Distance from polling places is just a part of living in the county, said Mary Jane Arrington, the Osceola County Supervisor of Elections.

“In Osceola County, if you live in the rural areas, you don’t walk to your polling locations, you drive there,” Arrington said.

Outside of Griffis Café in Kenansville, a group of men sit at a table for lunch.

Sleet William is one of them.

“I don’t like progress, I think everything should be, should go back to the original state that we was when I was a young man,” William said.

He believes voting should be personal.

“We’re a bunch of crackers, most of us have the same opinion.”

Osceola County also has a growing Puerto Rican population, and though these voters actually have more accessibility to polling stations compared to the people of Kenansville, some Latino voters are still worried about the number of polling stations nearby.

One of these voters is Lisandra Roman, owner of El Jibarito, a lechonera just outside Poinciana. She thinks the distance from polling places can create problems for voters that don’t have easy access to transportation.

“If they don’t have transportation, it can actually affect the process,” Roman said.

“I hear so many different stories about the mail-in vote and people that never receive or people that cheat,” Salves said.  “I believe that you have to go in and make sure that your vote is going to be safe.”

Arrington expects about 60 percent of voters to participate in either mail-in ballots or early voting before Election Day and said voters are able to track their ballots and make sure they don’t get lost.

“We call it convenience voting,” Arrington said. “A voter likes to vote when it’s convenient for them.”

Arrington said the more they push the convenience vote, the better the ultimate voter turnout will be for this year’s election.

“You know voting is like traffic on Election Day,” Arrington said. “Everybody wants to get on the road at the same time.”

As for Richardson, she’s just waiting for election season to be over.

“I’ll be glad when it’s over,” Richardson said. “Other than that, I don’t have anything else to say about it.”

Early voting runs until Sunday. As of Thursday, Osceola County residents have casted over 76,000 ballots.