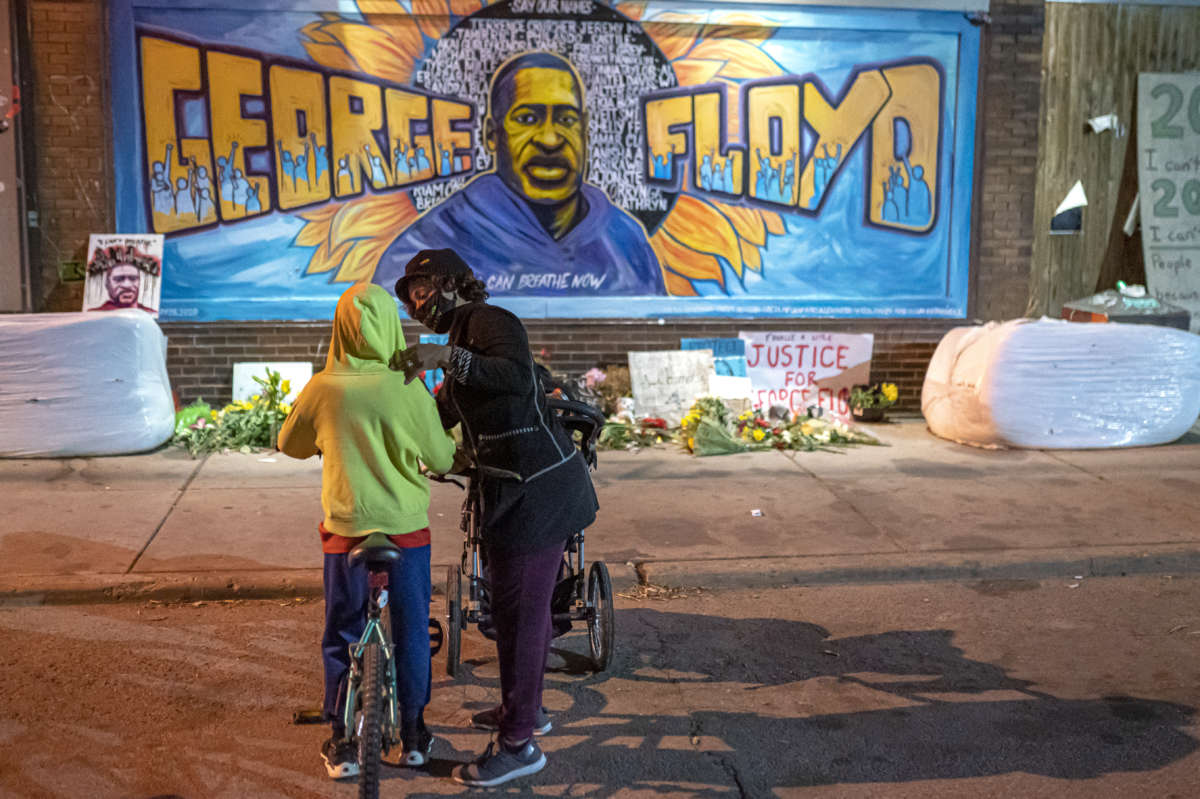 Three-quarters of American adults agree with the guilty verdict of former Minneapolis police officer Derek Chauvin for the murder of George Floyd, according to a new NPR/PBS NewsHour/Marist poll released nearly a year after Floyd's killing.
Image credit: Nathan Howard

White and Black Americans have very different views of race in America and have had very different experiences when it comes to dealing with discrimination and trusting police, a new NPR/PBS NewsHour/Marist poll details.

Three-quarters of American adults also agree with the guilty verdict of former Minneapolis police officer Derek Chauvin for the murder of George Floyd, though about half of Republicans and Trump supporters think it was either the wrong decision or they aren’t sure.

The survey also found a big gender gap on the threat of white supremacy. Americans are split on whether it represents the “most lethal terrorist threat to the homeland today,” as President Biden said recently. The majority of women said it is; the majority of men said it isn’t.

The findings underscore the often-sharp differences Americans have when it comes to race, discrimination and policing ahead of the one-year anniversary of Floyd’s death, and as Biden and allies make a push on Capitol Hill for policing reform.

But the pollsters also found some room for optimism in the results: The percentage of Americans saying race relations are worse than they were a year ago has declined; most Americans believe police use-of-force guidelines should be reformed; and a majority thinks race relations will be better for future generations, with younger people being among the most likely to say so.

“The country has gone through a lot in the last couple of years, and there is a sense of optimism for the future,” said Barbara Carvalho, director of the Marist Poll, adding, “The change to the Biden administration has reinforced that for Democrats and people of color and independents.”

The survey also found almost three-quarters of American adults say they have either gotten or will get a COVID-19 vaccine, unchanged from the previous month, though four-in-10 Republicans continue to say they will not get one.

Race and trust in police

Just 30% of American adults said they have often or sometimes personally experienced discrimination or been treated unfairly because of their race or ethnicity.

But that is very different along racial and ethnic lines. Just 15% of whites said they have experienced discrimination or been treated unfairly based on their race, while 61% of Black Americans and 39% of Latinos said they have.

Republicans (91%) were far more likely than Democrats (62%) to say they have at least a fair amount of confidence in police officers in their communities to gain the trust of local residents.

That bipartisan trust doesn’t extend to Black Americans. Just 46% of Black adults express at least a fair amount of confidence that local police can gain trust.

There have been numerous high-profile cases of police violence involving Black Americans, and multiple demonstrations bringing light to the issue.

Predictably, there was a huge divide on the question based on who someone voted for, as almost 6-in-10 Biden supporters said people of color are treated more harshly, while 8-in-10 Trump supporters said they’re treated the same.

People had far more confidence in the police to keep them safe and protect them from violent crime. About three-quarters of respondents, including a strong majority of Black Americans, said so.

It is notable, however, that Black Americans and younger Americans were the least likely to agree with that.

Two-thirds of respondents said they believe current policies regarding police use of force need reform. But again there was a sharp divide along party lines — 92% of Democrats and 66% of independents said the policies should be reformed, but just 33% of Republicans thought so.

There was, however, near-universal support for police wearing body cameras.

Almost 9-in-10 respondents said they are comfortable talking about race with friends and family, though only two-thirds said they actually have talks at least sometimes.

Those who live in small towns and white evangelical Christians were also far less likely to have those discussions than their big-city and suburban counterparts.

There was also a wide generation gap. Those in the Greatest Generation — people 74 years of age or older — were far less likely to say they have those conversations than Millennials or those in Gen Z.

For all the division, Americans are generally hopeful that race relations for future generations will be better than they are now. Almost 6-in-10 said so, with Democrats, whites with college degrees, younger and Black Americans the most likely to say so.

Looking at the last time the question was asked, in August 2017 when Donald Trump was president, far fewer Democrats, Black Americans and Latinos said things had gotten worse. Republicans, on the other hand, had spiked considerably.

A slim majority of Americans — 51% — said they approve of how Biden is handling race relations, including half of independents and 85% of Democrats. Just 14% of Republicans approve.

That’s an improvement from Trump’s early days, when a majority of Americans expected race relations to get worse.

The percentage of American adults saying they will get a COVID-19 vaccine (14%) or have already gotten one (59%) held steady at 73% this month.

There is a question, though, of whether the country has hit a plateau, as daily vaccinations continue to decline, and as a quarter of Americans continue to say they will not get vaccinated — a number that has held steady since March.

The least likely to say they will get vaccinated continue to be Trump supporters (43%) and Republicans (41%), particularly Republican men (44%). But a third of Americans under 45 also say they will not get the shot.

There is no real statistical difference in hesitancy between white and Black Americans — 73% of whites say they’ve either gotten the vaccine or will get it; 75% of Black Americans said the same (69% of Latinos also said so).

Americans are overwhelmingly supportive of providing doses of vaccines to other countries that need it — 84% said it’s a good idea.

The job Biden is doing

Biden continues to get good marks on handling the virus. He gets a 66% approval rating for it in this poll, including from a third of Republicans.

For the overall job he’s doing, the president retains a 53% approval rating, about the same as last month.

When it comes to the economy, it’s a similar 51% approval rating, three points lower than last month. That’s something to watch, but it’s still within the margin of error of the 54% he got last month and the same as his rating in late March.