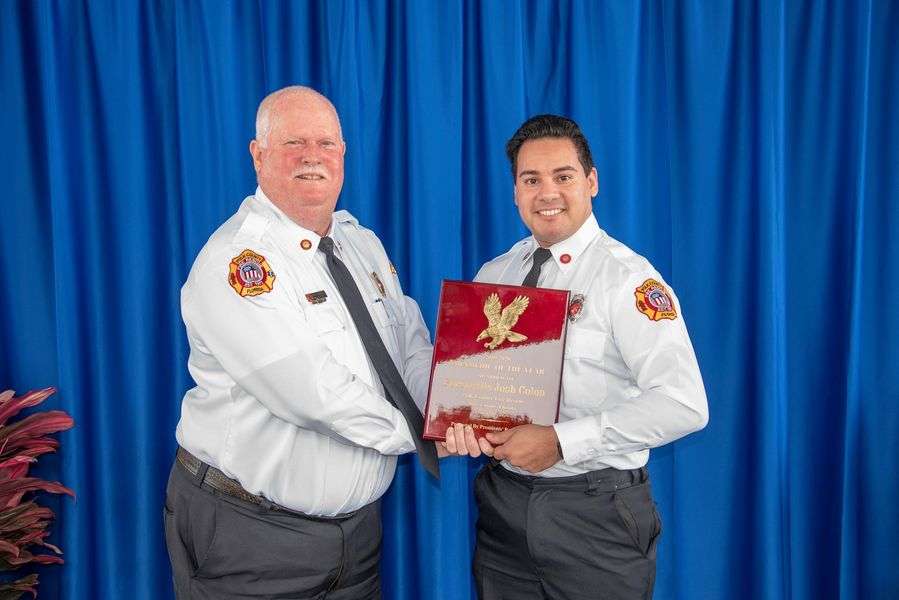 Joshua Colon, shown on the right, was recognized as Polk County's 2020 Firefighter of the Year. Photo: PCFR via Facebook

A couple weeks ago, 31-year-old Joshua Colon was being celebrated as Polk County’s firefighter of the year.

Now the Orlando man is accused of covering up the theft of three doses of coronavirus vaccine.

Colon resigned and has been arrested on several counts of forgery and falsifying records for his part in the alleged theft.

Polk County Sheriff Grady Judd says Colon cooked up the paperwork after a fire rescue captain tried to pressure him into stealing the doses for the captain’s parents.

Judd said, “The bottom line is: Joshua tried to cover for the captain, Joshua set up the circumstance for the vaccines to have been stolen. Had Joshua simply gone to his boss right then, he’d have been the hero.”

County Fire Chief Robert Weech says Colon got involved in something that did not really benefit him at all.

“He was paramedic of the year just recently,” Weech said. “We honored his accomplishments. He worked very, very hard. I consider this to be out of character for him but of a serious discrepancy. I’m confident in saying he made some severe mistakes.”

Once caught, Colon cooperated with deputies and got the captain on the phone.

Investigators found two of the three loaded syringes in the captain’s car at a friend’s house in St. Cloud. The captain had left for a special assignment helping battle COVID-19 in California.

Judd said he would be arrested on his return to Polk County.