Politics, Governance And How Presidents Respond To Crises: A Conversation With Peter Rouse And Andrew Card 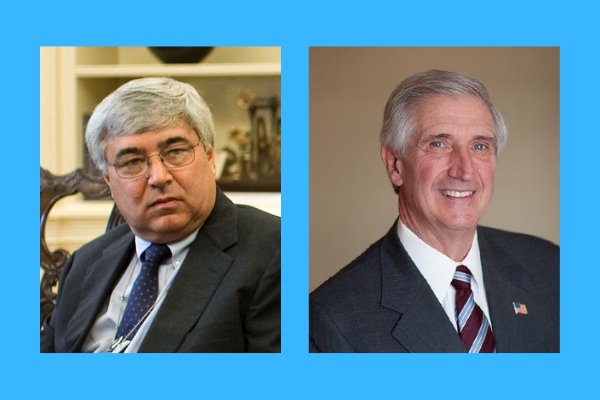 We’re less than three weeks away from the presidential election and Americans appear more divided politically than ever before. The country is still in the grip of a deadly pandemic and legislation to help people hardest hit by the economic crisis is stuck in congress. Meanwhile, President Trump has declined to promise a peaceful transition of power.

Andrew Card who was chief of staff for president George W Bush, and Peter Rouse, who was a counselor and interim chief of staff to President Barack Obama were guest speakers this week at the Lester N Mandell endowed distinguished lecture series hosted by the University of Central Florida and moderated by 90.7’s Matthew Peddie.

They spoke on Zoom about how administrations respond to crises like 9/11, the Great Recession or the coronavirus pandemic, and how the Trump administration has changed the Republican party and American politics.

“I am not a big Trump fan, but I agree with a lot of his policies,” said Card.

“Probably his biggest asset is that he is a phenomenal communicator and marketer. And he able to get the stage, keep the stage and prevent other people from standing on it. So he dominates the conversation. And almost no one can talk about politics without talking about Donald Trump.”

“I think President Trump has changed the nature of our democracy. And I’m not going to say that necessarily for the better,” said Card.

Rouse said Florida could be the defining state in this presidential election.

“No Republican has been elected president, without winning Florida since 1924. That was Calvin Coolidge,” said Rouse.

“The unique aspect of Florida is that if Biden were to win Florida, and hold the other states that Secretary Clinton won in 2016, he would only need to win one of the remaining five major battleground states to get to 270, which is Michigan, Pennsylvania, Wisconsin, North Carolina and Arizona.”

Card talked about his role in alerting President Bush of the second plane to hit the World Trade Center on the morning of September 11th 2001. A photo from that day shows him whispering in the ear of the president as he read to a group of school children at a school in Sarasota, Florida.

“It is an iconic photograph of me whispering in the president’s ear,” said Card.

“I am not iconic. It does define an era that changed the world. It certainly changed America. And we are still living with those changes. So I plead with people- we all promised never to forget that day, especially the 2977 people who died that day, and all of the policemen and firemen and rescue workers that answered the call to duty, and then the thousands of people who answered the call to duty for our country. So never forget, I won’t forget.”

Rouse said it’s very concerning that Trump will not commit to a peaceful transition if he loses the election, but he says there’s an element of political rhetoric in his words.

“He’s behind right now, and he’s trying to motivate his people and so forth and so on. And I still hope that if push comes to shove that if he does lose on November third, and it’s clear that he did, that he will accept that and, you know, we can move forward, but I guess we’ll just have to wait and see.”