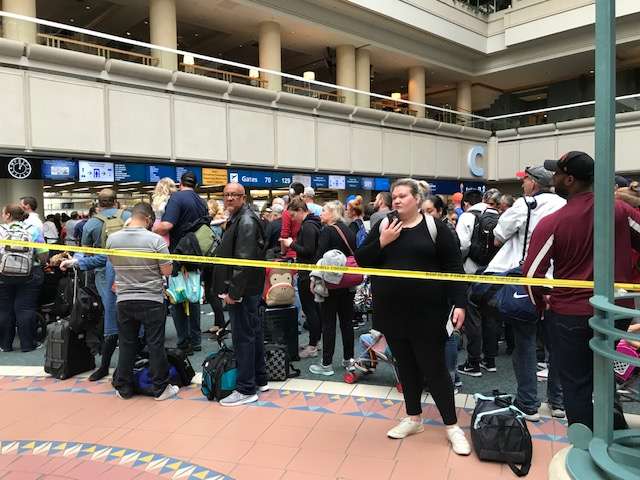 Gates 70-129 have reopened at Orlando International Airport after the death of a TSA worker this morning. Photo: Danielle Prieur

Police say the off duty TSA officer, a man in his 40s, jumped from a balcony of the Hyatt Regency Hotel into the atrium of the Orlando International Airport at 9:30am.

He was transported to hospital in critical condition, where he was pronounced deceased.

We can confirm the deceased individual involved in this incident is an employee of the @TSA. Our hearts are with the @TSA family during this very difficult time.

Airport spokeswoman Carolyn Fennell said the incident happened in the area in front of the security checkpoint for gates 70 through 129.

Immediately after, “unscreened passengers went through the checkpoint without proper screening. This necessitated closure of airsides 2 and 4 and all flights two and from those airsides were stopped until appropriate security measures were re-instated.”

Gates were re-opened by 12:30 pm, and airport operations resumed after a security sweep of aircraft and passengers were re-screened. Delta, Southwest, Alaska and Air Canada were affected by the stoppage. By 2:45 p.m. Southwest had cancelled 49 inbound flights and 45 outbound flights.

Arin Thomas was waiting in the security line with her three children when they were told to evacuate. That’s when 9 year-old Katie ran ahead, said Thomas.

“She did what she was supposed to. And I couldn’t see her and it freaked me out.”

“I felt really really glad that I found my mom.”

Passengers waited in line for as long as four hours as departures were delayed.