Man Who Claimed To Have A Bomb Near The U.S. Capitol Surrenders 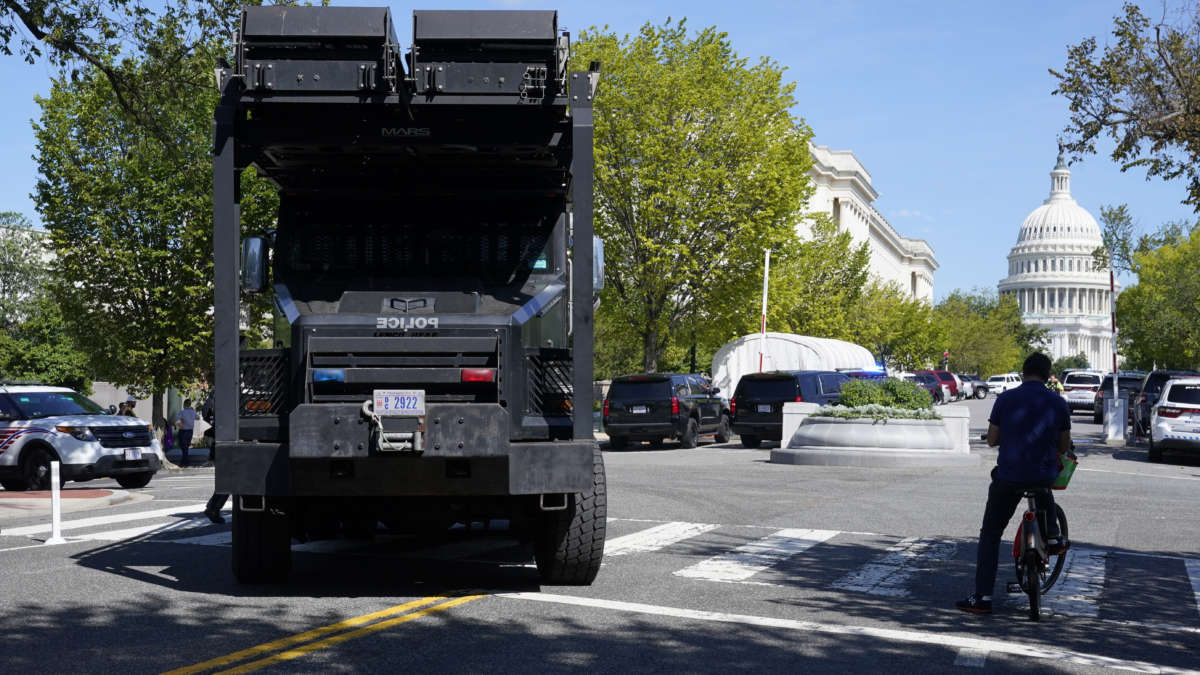 A police vehicle moves into an area near the U.S. Capitol and a Library of Congress building in Washington on Aug. 19, 2021, as law enforcement officials investigate a report of a pickup truck containing an explosive device.
Image credit: Patrick Semansky

A man who claimed to have a bomb in his pickup truck in front of the Library of Congress has surrendered, ending an hours-long standoff Thursday.

The suspect — identified by authorities as Floyd Ray Roseberry, 49, from Grover, N.C. — is now in custody.

It’s not clear if there was an actual bomb.

“He gave up, did not resist, and our folks were able to take him into custody,” U.S. Capitol Police Chief J. Thomas Manger said Thursday. “We don’t know what his motives are at this time.”

Manger said police negotiated with Roseberry by writing on a whiteboard. Eventually police used a robot in an attempt to give him a phone to communicate with, but Manger said Roseberry declined to use it. Manger said shortly afterward Roseberry got out of the vehicle and he was taken into custody without incident.

The truck has been removed from the scene. Manger said that “we don’t know as of yet” whether there was a bomb.

Manger said that Roseberry’s mother had recently died and that according to his family, “there were other issues that he was dealing with.”

Facebook removed the suspect’s profile and deactivated his livestream

“As far as I know, the FBI has interviewed the wife, and she is cooperating,” Todd told NPR’s Carrie Johnson.

Several hours after the report of the incident, Facebook said it had deactivated a livestream, purportedly of the suspect in his truck.

A pickup is parked Thursday on the sidewalk in front of the Library of Congress’ Thomas Jefferson Building, as seen from a window of the U.S. Capitol. A man sitting in the truck told police he had a bomb. He later surrendered.
Alex Brandon/AP

In at least one of the videos, a man can be seen making anti-government remarks as well as saying he had ammonium nitrate in his truck’s toolbox.

Lawmakers are mostly away from Washington for the August recess

Manger told reporters that the man drove a black pickup onto the sidewalk in front of the library’s Thomas Jefferson Building at 9:15 a.m. ET and told an officer he had a bomb. The officer said the man had what appeared to be a detonator in his hand.

The bomb threat came as Congress continues to investigate the Jan. 6 insurrection at the U.S. Capitol, when a mob of demonstrators supporting then-President Donald Trump stormed the building.

As a result of the threat, several streets in the area were closed as well as nearby buildings, including the U.S. Supreme Court and Congress. The FBI said its Washington Field Office responded to the incident, along with agents from the Bureau of Alcohol, Tobacco, Firearms and Explosives.

Neither the House of Representatives nor the Senate is in session, and most lawmakers are not in their offices.