Police, Counselors Respond To Complex With 15 Heroin Overdoses in One Week 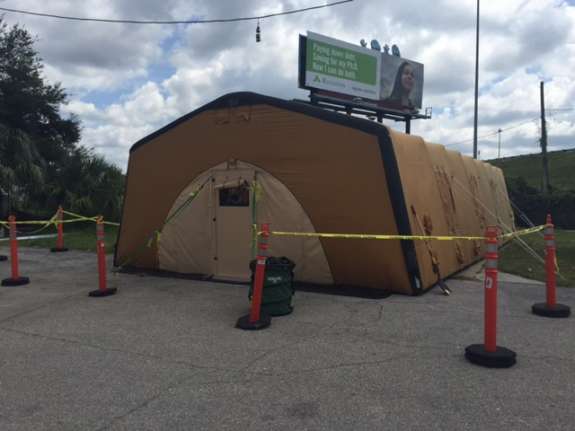 A mobile hospital unit was set up behind Blossom Park condominium complex.

There were 15 overdoses and three deaths originating from the Blossom Park condominium complex last week. The police presence is heavy now at the 3-story condominium complex off Orange Blossom Trail in south Orlando, with only residents allowed in and out.And in back, an emergency shelter tent was been erected. Normally it would be used as a 12-bed mobile hospital in the event of a hurricane or mass casualty incident.

But all this week the tent is filled with substance abuse counselors. Orange County’s Director of Public Safety Dr. George Ralls said the county is marrying law enforcement with health care.

“[Police] are out here to control the supply issue with heroin,” Ralls said. “We’re out here to address folks who may be caught up in the addiction cycles.”

Heroin use has quadrupled in recent years nationwide as illegal prescription drug use has declined, and heroin has overtaken cocaine as the deadliest street drug in Orange County. The Blossom Park condominium complex was built as a hotel and converted in 2003.

Police presence was also increased at the site, which saw 15 overdoses last week.