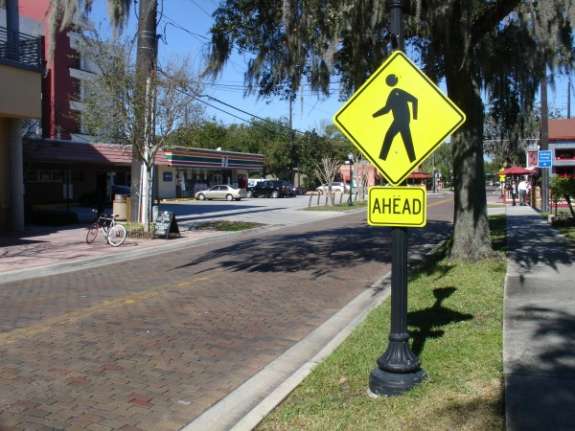 According to the Smart Growth America organization, the Orlando Metro Region has spent years ranking number one on the Pedestrian Danger Index report.

To help combat this statistic, a coalition of law enforcement and government agencies joined forces with a group of nonprofits to form the Best Foot Forward campaign, an operation that aims to engage and educate drivers by reminding them they must yield to pedestrians and bikers at crosswalks.

The coalition said in a press release on Friday that they will be back out on the roads this week in anticipation of Spring Break. Spokesperson Emily Hanna said one of the operation’s main goals is to come off that number one spot on the Pedestrian Danger Index.

“We launched this campaign to educate drivers that we are number one at this,” Hanna said. “This is not something that we want to be number one at, and we all need to put our best food forward, pun intended, to make reducing pedestrian and bicycle fatalities a priority.”

“The trained decoy officer steps out into the crosswalk, making eye-contact with the driver, trying to see if they’re going to yield to that pedestrian or drive right by,” she said. “Unfortunately, often times they drive right by and that’s why we have officers on either side of the crosswalk who are able to quickly pull that driver over and give them either a warning or a citation.”

Another important part of this project is data collection and reports that aid in future road engineering plans and improvements. Hanna said the data and reports vary among communities, which is important to determine the best ways to structure road safety for each unique and diverse situation.

“So, this is all about education,” Hanna said. “I like to say, we all live, and work, and play in the same community, and we should all be responsible for the safety of others as well. So, we strive for that.

For more information about the crosswalk locations active in this mission, or to learn more or become involved, please visit the campaign website here.