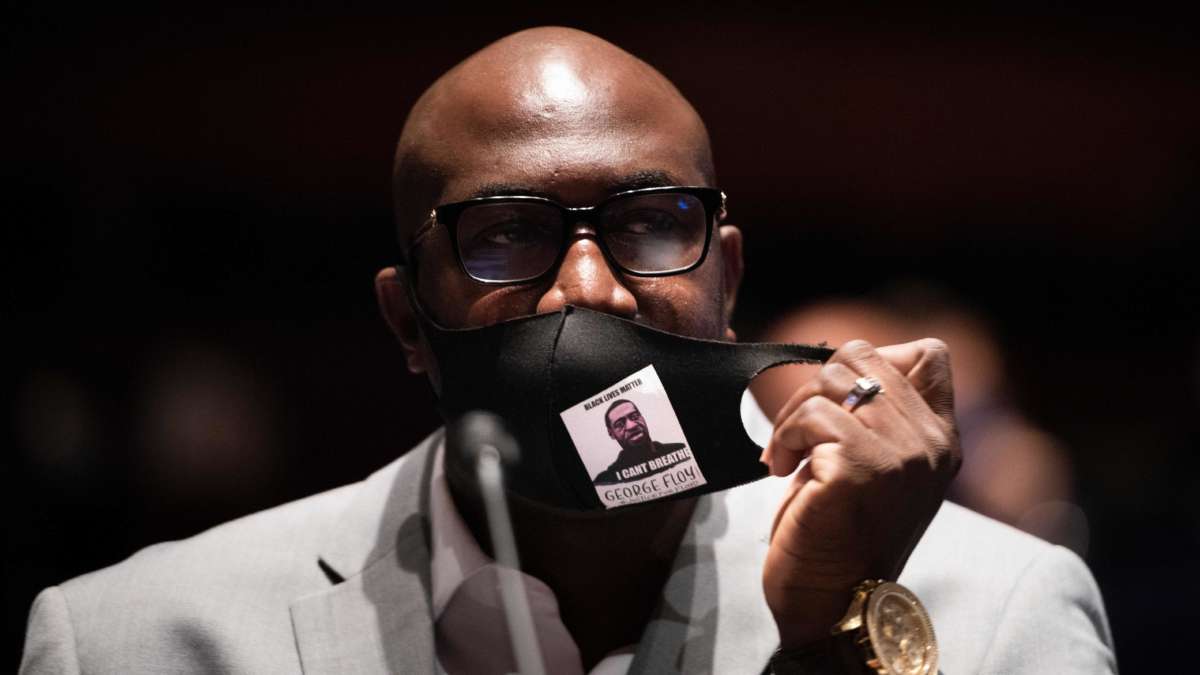 Philonise Floyd laid bare his anguish over the death of his brother George at the hands of police as he testified in front of the House Judiciary Committee on Wednesday.

“I couldn’t take care of George that day he was killed, but maybe by speaking with you today, I can help make sure that his death would not be in vain. To make sure that he is more than another face on a T-shirt, more than another name on a list that won’t stop growing,” Floyd said during his opening statement in a hearing examining police conduct and accountability.

Floyd came to D.C. to testify the day after he buried his brother in their hometown of Houston.

George Floyd died after a Minneapolis police officer was filmed kneeling on his neck for over eight minutes on Memorial Day, sparking nationwide protests over racism and police violence.

“I just think about the video over and over again. It felt like eight hours and forty-six minutes,” Floyd said through tears later in the hearing.

“It hurt seeing my brother plead for his life. Watching that officer just put his knee on his neck,” he said. “Every day, just looking at it. Anywhere, that’s all people talk about. For the rest of my life, that’s all I’ll ever see. … His kids had to watch the video.”

“My family, they just cry and cry every day. And just ask, why? He pleaded for his life. He said he couldn’t breathe. Nobody cared. Nobody. People pleaded for him. They still didn’t care. Justice has to be served. Those officers, they have to be convicted. Anybody with a heart, they know that’s wrong. You don’t do that to a human being. You don’t even do that to an animal.”

In his opening statement, Philonise Floyd implored the committee to take action.

“George called for help and he was ignored,” he said. “Please listen to the call I’m making to you now, to the calls of our family, and the calls ringing out in the streets across the world.”

Congressional Democrats unveiled legislation on Monday that would drastically overhaul policing in the country and would ban the type of chokehold that was used on George Floyd. Senate Republicans are also drafting police reform legislation, led by Sen. Tim Scott of South Carolina, the chamber’s lone black Republican.

Watch Floyd’s opening statement and read the text below.

Chairman Jerold Nadler and members of the committee, thank you for the invitation to be here today to talk about my big brother, George. The world knows him as George, but I called him Perry.

Yesterday, we laid him to rest. It was the hardest thing I’ve ever had to do. I’m the big brother now. So it’s my job to comfort our brothers and sisters, Perry’s kids, and everyone who loved him. And that’s a lot of people.

I have to be the strong one now, because George is gone.

And me being the big brother now is why I’m here today. To do what Perry always would have done – to take care of the family and others. I couldn’t take care of George that day he was killed, but maybe by speaking with you today, I can help make sure that his death would not be in vain. To make sure that he is more than another face on a T-shirt, more than another name on a list that won’t stop growing.

I was reminded of that when I watched the video of his murder. He called all the officers “sir.” He was mild-mannered; he didn’t fight back. He listened to all the officers. The man who took his life, who suffocated him for eight minutes and 46 seconds, he still called them “sir” as he begged for his life.

I can’t tell you the kind of pain you feel when you watch something like that. When you watch your big brother, who you’ve looked up to your whole entire life, die, die begging for his mom.

I’m tired. I’m tired of pain. Pain you feel when you watch something like that. When you watch your big brother, who you looked up for your whole life, die begging for his mom.

I’m here today to ask you to make it stop. Stop the pain. Stop us from being tired.

George called for help and he was ignored. Please listen to the call I’m making to you now, to the calls of our family, and the calls ringing out in the streets across the world.

People of all backgrounds, genders and races have come together to demand change.

Honor them, honor George, and make the necessary changes that make law enforcement the solution – and not the problem.

Hold them accountable when they do something wrong. Teach them what it means to treat people with empathy and respect. Teach them what necessary force is. Teach them that deadly force should be used rarely and only when life is at risk.

George wasn’t hurting anyone that day. He didn’t deserve to die over twenty dollars. I am asking you, is that what a black man’s worth? Twenty dollars? This is 2020. Enough is enough. The people marching in the streets are telling you enough is enough. Be the leaders that this country, this world, needs the right thing.

The people elected you to speak for them, to make positive change. George’s name means something. You have the opportunity here to make your names mean something, too.

If his death ends up changing the world for the better, and I think it will, then he died as he lived. It is on you to make sure his death isn’t in vain.

I didn’t get the chance to say goodbye to Perry while he was here. I was robbed of that. But, I know he’s looking down on us now. Perry, look up at what you did, big brother. You changed the world.