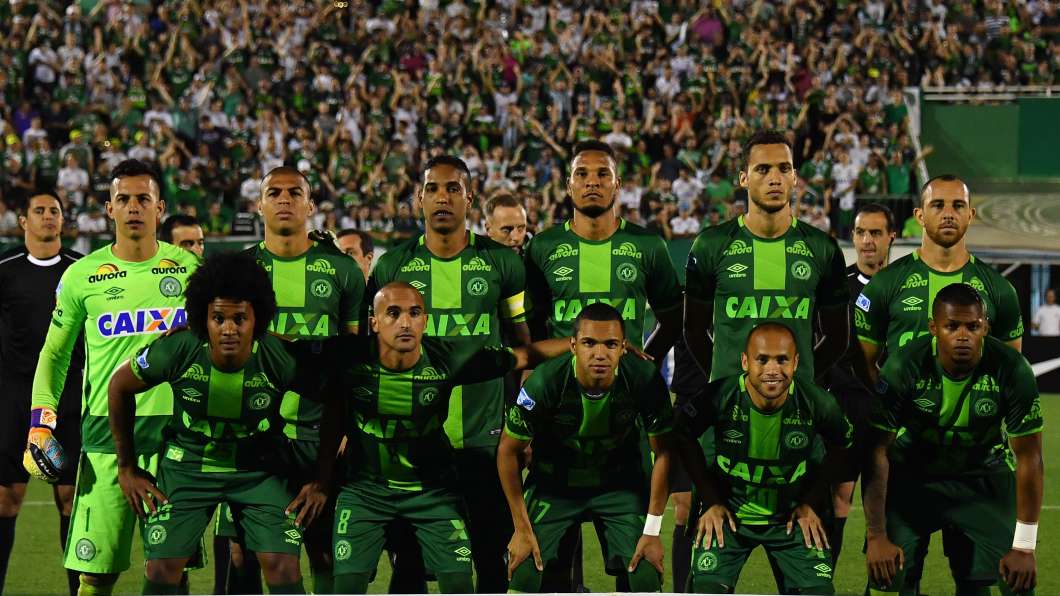 Brazil's Chapecoense players pose for pictures during their 2016 Copa Sudamericana semifinal against Argentina's San Lorenzo in Chapeco, Brazil, on Nov. 23. Most of the players on the team died in a plane crash in Colombia late Monday.
Image credit: Nelson Almeida

Five people survived the crash of the charter plane, according to authorities.

“The plane had departed from the Bolivian city of Santa Cruz but reported an electrical emergency shortly before crashing late Monday night,” he says.

Reporter Pablo Medina Uribe spoke with NPR’s Morning Edition and said it’s still not clear why the plane went down, although some are speculating it may have run out of fuel.

“What we do know is that when the plane crashed, it broke into two parts and didn’t catch fire,” he said. “So that’s why one of the theories — the one about the fuel running out — is getting some ground. But we still don’t know anything for sure.”

The crash site is located in a hard-to-access area and rain has hampered rescue and recovery efforts.

“Dozens of rescuers working through the night were initially heartened after pulling three passengers alive from the wreckage,” The Associated Press reports. “But as the hours passed, and heavy rainfall and low visibility grounded helicopters and complicated efforts to reach the mountainside crash site, the mood soured to the point that authorities had to freeze until dusk what was by then a body recovery operation.”

The team that was traveling on the plane, Chapocoense, is a first-division soccer team from the southern Brazilian city of Chapeco, scheduled to play in the finals of the Copa Sudamericana tournament on Wednesday, John Otis reports.

The team was having a “fairytale year,” Catherine Osborn reports from Rio de Janeiro.

“After almost going bankrupt 3 years ago, it defied critics this year by fighting its way to its first international tournament, the Copa Sudamerica,” she says.

Otis says that the survivors of the crash include a Brazilian journalist and two of the players for Chapocoense.