Photos: Winner Of The Florida Prize In Contemporary Art To Be Revealed In Orlando 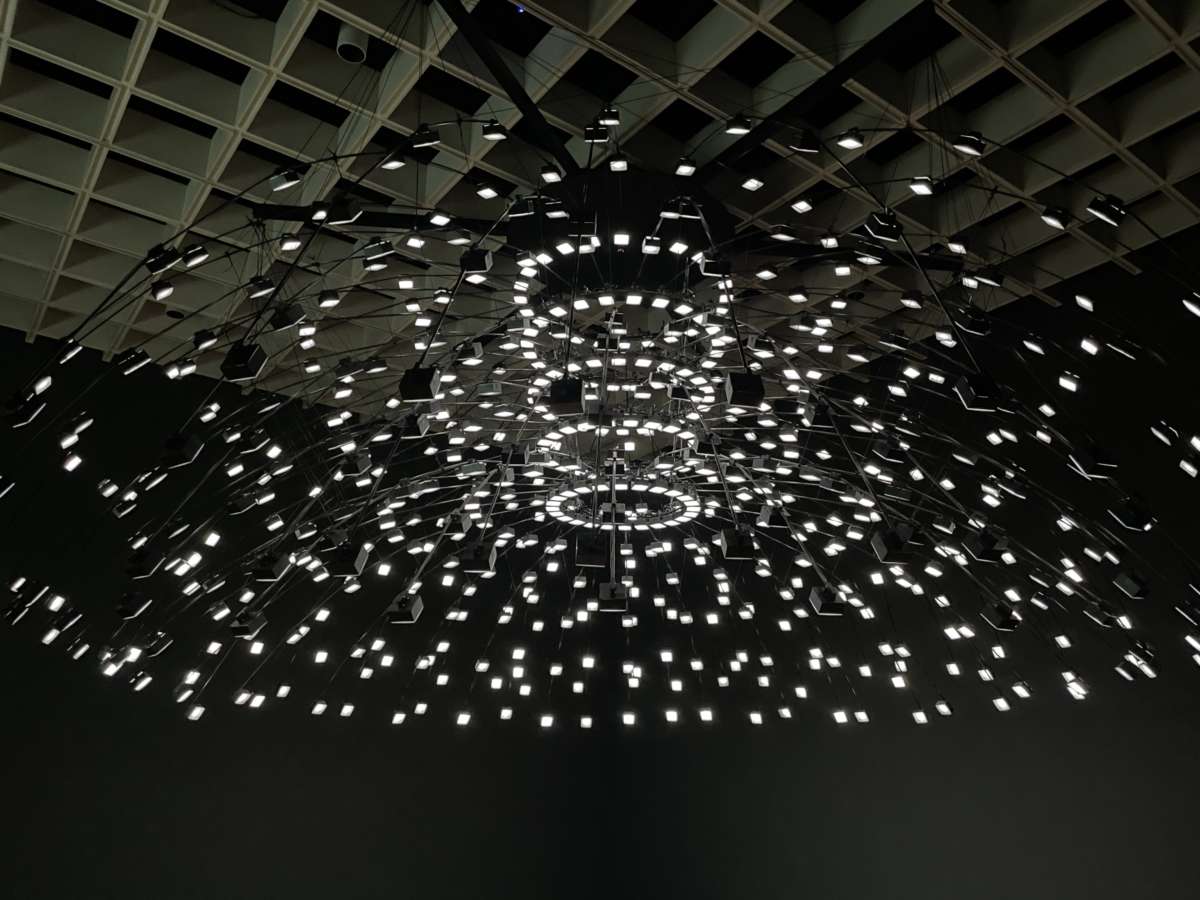 The Fragility of the Promise, by Kedgar Volta, is an installation of moving lights, made to represent the shifting nature of relationships as people (lights) move into and out of your life. Volta, who is Cuban, was stuck in Florida and could not visit home during the pandemic. Photo: Nicole Darden Creston, WMFE

Tonight at the Orlando Museum of Art, one Sunshine State artist will be awarded the Florida Prize in Contemporary Art, and the prestige – and the $20,000 prize – that goes with it.

The annual Florida Prize exhibit aims to elevate a wide variation of cutting-edge, progressive, and sometimes provocative artists. Each of the ten finalists has their own space within the exhibition, to show work ranging from documentary photography to full-room, interactive, multimedia installations.

OMA’s Chief Curator Hansen Mulfold says the finalists are selected from among hundreds of Florida artists.

“The selection of the show is not just about the quality of the work – it is a very important part of the show, but it’s also how all the parts come together to make one show in which you see a lot of different kinds of voices and ideas coming out of these artists,” said Mulford.

He said the styles and the artists themselves are representative of Florida’s unique tapestry of culture.

“Diversity is another big aspect of the show. If you look at the history of the now-70 artists that have been picked they are people from all over the place, which reflects Florida’s population, which are people from everywhere, worldwide, so that’s definitely reflected in the show.”

The winner will be announced tonight at the opening preview party at OMA.

The Promised Land, by Robert Rivers, a professor of art at UCF. This is a small part of the 400 foot long piece which chronicles the artist’s interpretation of his nephew’s service as a Marine and death during the war in Afghanistan. Photo: Nicole Darden Creston, WMFE

The Fragility of the Promise, by Kedgar Volta, is an installation of moving lights, made to represent the shifting nature of relationships as people (lights) move into and out of your life. Volta, who is Cuban, was stuck in Florida and could not visit home during the pandemic. Photo: Nicole Darden Creston, WMFE

The Man who was Caged in a Zoo, by Marielle Plaisir. This mixed media work made from resin, plastic and stuffed fabrics was conceived by the artist in remembrance of Ota Benga, a young man taken by slave traders from the Congo in 1904. The work speaks of "the inhumanity of act of the imprisoning and exploiting the Black body, the sentence to death of the Black spirit." Photo by Nicole Darden-Creston, WMFE

This Immersive interactive installation by Tra Bouscaren is meant to call attention to our very flashy, very short-attention-span culture and its grimy, wasteful underbelly. It features a hidden camera so patrons will occasionally surface in the looping video. Photo: Nicole Darden Creston, WMFE

The Drifting Cabinets project by UF professor Sean Miller “and others,” is a collection of ecology-related curiosities from the Gulf Coast presented in an 1800s “trunk show” style. Patrons are encouraged to interact, and even use the microscope. Photo: Nicole Darden Creston, WMFE