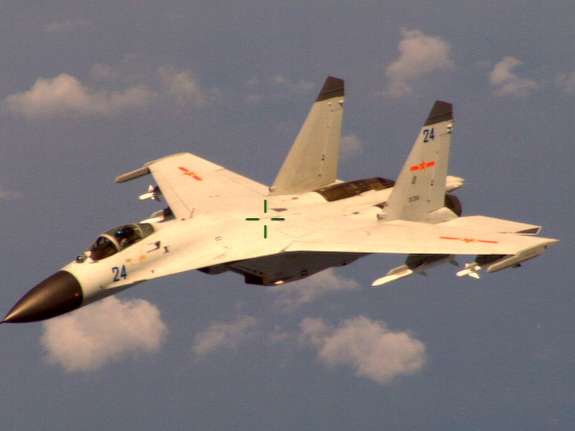 This handout photo provided by the Office of the Defense Secretary (OSD), taken Aug. 19, 2014, shows a Chinese fighter jet that the White House said Friday conducted a "dangerous intercept" of a U.S. Navy surveillance and reconnaissance aircraft.
Image credit: Uncredited

The Pentagon has released a photo of the Chinese fighter jet it says made a “dangerous intercept” of a U.S. Navy maritime patrol aircraft, flying close passes, performing barrel rolls and flying wingtip-to-wingtip with the American plane in what officials described as an “aggressive and unprofessional” manner.

As we reported Friday, the Chinese interceptor, now identified as an Su-27, came within 20 to 30 feet of a U.S. Navy P-8 Poseidon in international waters about 135 miles east of Hainan island in the South China Sea.

U.S. officials said they had made their concerns about the unsafe actions clear to Beijing through diplomatic channels.

The incident has remarkable similarities to a 2001 incident in which a propeller-driven U.S. Navy P-3 Orion was clipped mid-air by a Chinese fighter jet and forced down on Hainan. The crew of 24 Navy personnel on the aircraft were detained and questioned for more than a week before being released by China.