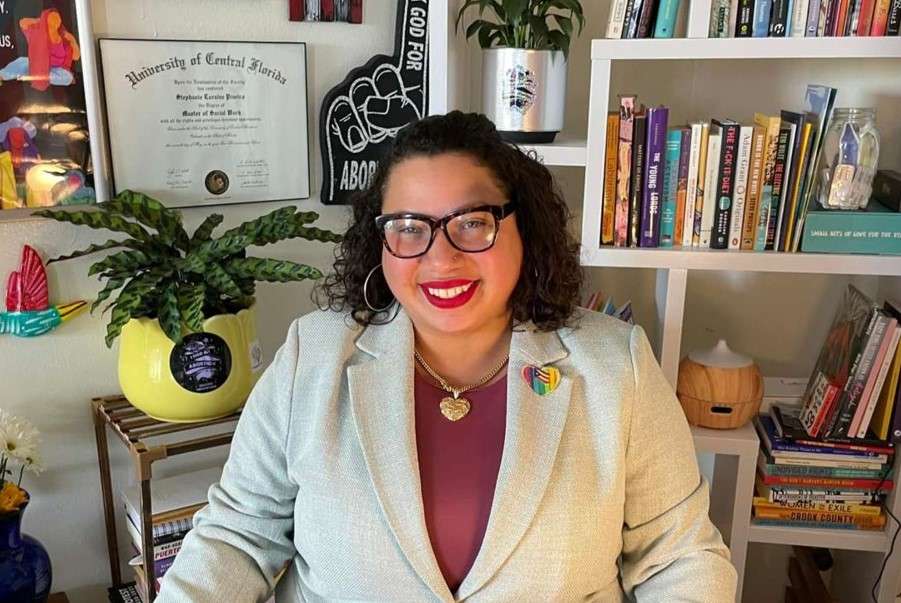 Stephanie Loraine Pineiro in her office at Florida Access Network

The reasons why people decide to have an abortion are deeply personal and often full of nuance.

Yesterday, WMFE brought you the story of Michelle Herzog. She says her abortions led her to the pro-life movement.

Today, we bring you the story of Stephanie Loraine Pineiro. Her experiences with abortion led her to do pro-choice work.

What follows is a transcription of Stephanie Loraine Pineiro’s interview with WMFE’s Nicole Darden Creston. Click the Play Audio button to hear her story in her own words.

My abortion story really starts when I was 16. And it was the first time that I actually drank alcohol and went to a party for Memorial Day. Two months later, I wake up puking, and something in my mind is telling me oh, crap, you might be pregnant. And the only sex that I thought that I had had in those two months was consensual.

I was very clear that because of my lived experience growing up in the type of situation that I grew up in – poverty, and I’m the oldest of four siblings, and I helped raise my siblings, and I grew up with my parents who had me when they were 19 and 20 – I was very firm that I had dreams that went beyond being a parent at the age of 16.

In finding out that I was pregnant, I told my mom that I wanted an abortion, and she didn’t want that for me. In her life, in her experience, my birth and my existence in her life saved her life, so she didn’t want me to end my pregnancy. So despite having a contentious relationship with my father, I told him that I needed an abortion. It was 2008. And at the time, and still, Florida has a law for parental involvement in abortion care. At the time, it was parental notification. And now, since 2020, it’s been parental consent. But then and now, when a minor calls a clinic, they say you have to bring a parent. So anyway, I tell my father, and he tells me he’s disappointed, but he’s not surprised.

And at this point, I am still not fully aware that the reason I’m pregnant is as a result of a sexual assault.

So I go to my appointment. When I’m in the recovery room, and I am really distraught, because emotions are high, and I just had an abortion…that was when I found out how far along I was. And I found out that the timing timed up with Memorial Day weekend, which was the first time I ever drank alcohol, and, you know, woke up in my bed and didn’t remember how I got there. I was a survivor of sexual assault and I just wasn’t ready to deal with that. So I continued with my life.

I decided, like, I want to start college early, and I have all these plans, because I feel like I have to make my life more worth living because I felt so much shame about my decision to have an abortion. At the time, there weren’t a lot of resources out there that were affirming. And I didn’t know that, you know, organizations like abortion funds existed. So I was very much going through all this by myself.

I worked as a waitress, I was saving money for my first car. I met my first boyfriend – love of my life, I thought – and that next summer, I needed emergency contraception. I was 17. My boyfriend was 18. And because he obviously wasn’t going to be the person taking the medication, when he tried to buy it, because minors still could not purchase, they wouldn’t let him buy it.

When the emergency contraception was denied, I pretty much waited and hoped that I didn’t get pregnant, but I ended up pregnant anyway. And I’m like, “There’s no way I can safely tell my parents that I need an abortion.” On the way out of the abortion clinic, my dad had taken the prescription of birth control, threw it out the window and said, “You’re gonna close your legs, right?”

So when you searched the internet at the time for how to have an abortion without parental permission, the process of a judicial bypass was what was the workaround. The internet told me to call a hotline, and at this point, Yahoo Answers was the messaging board and people who had gotten judicial bypasses posted on there saying like, this is what I did, and this is the process that I did. So I call this hotline, eventually got through to a lawyer who took my case pro bono, and this lawyer supported me in getting the bypass approved by the judge.

That was a whole situation in and of itself – I had to get an ultrasound, and I wrote an essay talking about what I wanted to do with my life and why becoming a parent at 17 wasn’t the right decision for me, I brought my grades, I brought them records of the abusive situation that I experienced at my home, that I am actually in fear of my life. So I was able to get my judicial bypass approved, took my judicial bypass to the clinic and I was able to have my abortion and move on with my life.

This is where my life blossoms and changes. I got two full scholarships to go to University of North Florida. I got my Associate’s degree when I was 18, as soon as I got my high school diploma. I graduated with two Bachelor’s degrees when I was 20 years old. I had moved out of my parents’ house to my dorm. And then when I graduated from college, I moved to Orlando, kind of restarted my life, and got my Master’s degree in social work.

And the year I graduated from social work school, in 2015, I saw an article about abortion funds, and the work that they do to make abortion access a reality for people who have no idea that resources exist to support you in getting to your abortion. And I was like, Oh my God, I need to be a part of that. I want to do something, I want to like volunteer, whatever. I met with them, I became a volunteer, quickly became a board member. And that is one of the silver linings, that I was able to put what happened, turn that into action. And that was a very long road, to make that happen. Fast forward seven years, and it meant me, a person who has this lived experience with an abortion, directly leading this work.