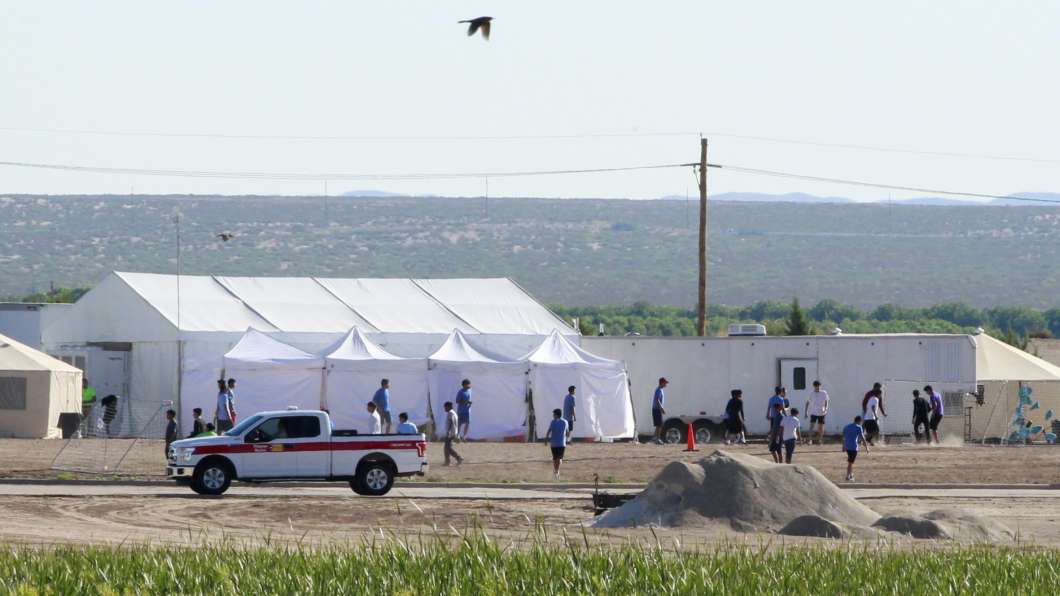 The Pentagon plans to build temporary camps for detained immigrants. Here, children of detained migrants are seen at a tent encampment near the U.S. Customs and Border Protection port of entry in Tornillo, Texas.
Image credit: Jose Luis Gonzalez

The defense chief did not give details about where the bases are that would contain the camps. As for how the process began, he said other government agencies had asked the Pentagon for help in housing detained migrants.

The news comes one week after President Trump said, “The United States will not be a migrant camp, and it will not be a refugee holding facility.” He added, “Not on my watch.”

Of the military’s plan to build camps, Mattis said, “providing shelter for people without shelter — we consider that to be a logistics function that is quite appropriate.”

The secretary described the plan to reporters on board his plane as he traveled to Asia to visit his counterparts in China, South Korea, and Japan.

Mattis compared the temporary camps to the military’s response during a humanitarian crisis.

“This is something that we can do. Again, whether it be refugee boat people from Vietnam, people who’ve been knocked out of their homes by a hurricane – absolutely, it’s appropriate the military provide logistic support however it’s needed.”

The Trump administration has pledged a “zero tolerance” for illegal immigration, and the president has shaped and reshaped its policy, leading to the U.S. government separating more than 2,500 children from their parents at the border over a recent five-week period.

The Department of Health and Human Services says it has been able to reunite 522 of those children with their families after they were taken into custody by U.S. Customs and Border Protection officials.

After his approach met with nearly universal outrage, the president altered his policy on separating families last week. As a result, family units who are taken into custody after immigrating illegally are now subject to being detained together.

Trump’s policy brought charges that it was both illegal and cruel to separate migrant families — to put children into large holding facilities hundreds of miles away from their parents and caregivers. It also raised serious questions about what the government was doing to keep track of those kids, to ensure their parents could find them.

The backlash includes the website TrumpHotels.org, a satirical takeoff on the president’s actual resort business website (whose address ends in .com). Instead of featuring photos of pools and golf courses, the site highlights images of detained children and adults living in fenced cages inside warehouse-like structures.

Republicans in Congress have pledged to pass a new immigration law aimed at addressing concerns about migrants’ safety and legal protections — while also satisfying conservatives who want to clamp down on immigration.

The political process is playing out amid intraparty discord and mixed messages from the White House as NPR’s Kelsey Snell reports — including Trump saying to ignore the issue until November, when he predicts Republicans will add to their majorities in Congress.

Over the weekend, Trump said via Twitter, “We cannot allow all of these people to invade our Country. When somebody comes in, we must immediately, with no Judges or Court Cases, bring them back from where they came. Our system is a mockery to good immigration policy and Law and Order.”