Pence Warns Of An Unsafe America Under Biden: Takeaways From Day 3 Of The RNC 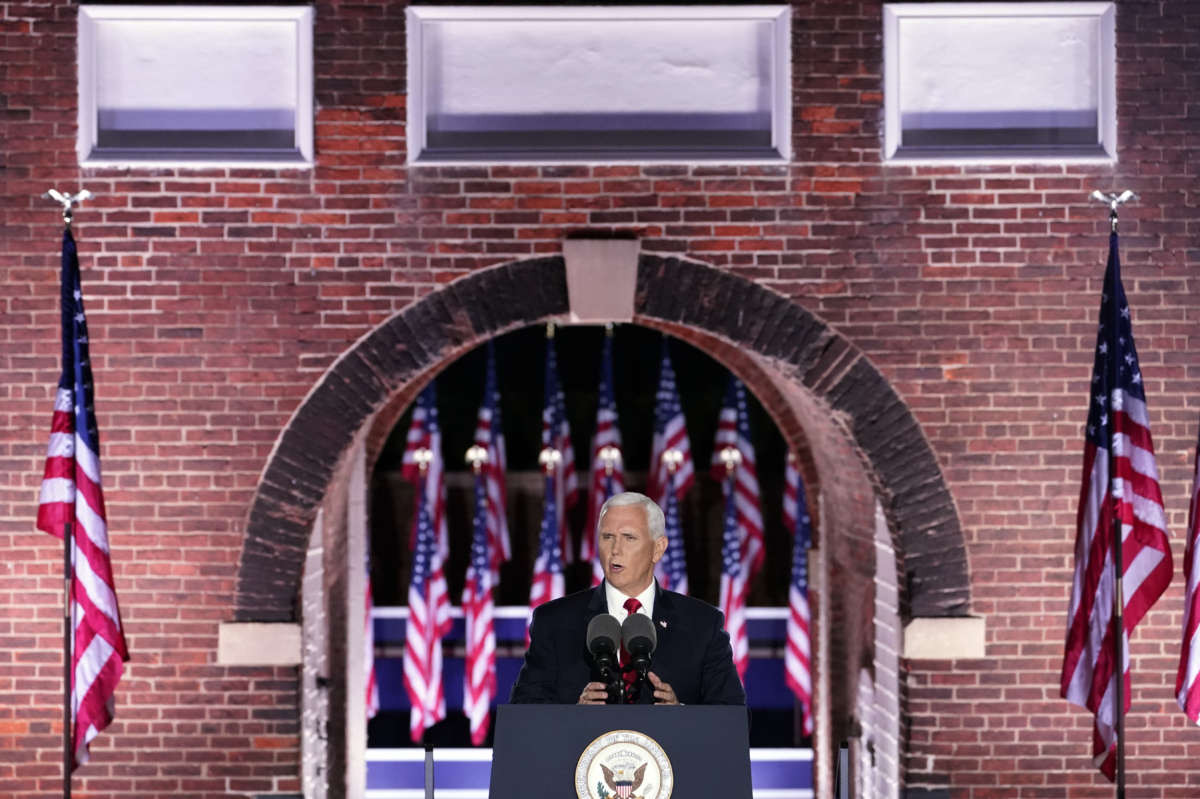 Vice President Pence speaks on the third day of the Republican National Convention at Fort McHenry in Baltimore. He stressed a law and order message as protests over racism and policing continue.
Image credit: Andrew Harnik

Follow live coverage of the RNC all week at NPR.org/conventions.

President Trump’s campaign was forced to deal with sudden focus on two major news stories — mounting national unrest about racial injustice after another shooting of a Black man by police in Wisconsin, and Hurricane Laura, which is threatening “unsurvivable”storm surge — on the third night of the Republican National Convention.

Vice President Pence spoke to a live audience at Fort McHenry in Baltimore as the keynote speaker and loyal partner of the president’s. While he touched on both developments, his law-and-order message quickly pivoted to attack Joe Biden and Kamala Harris as the Democratic leaders who threaten basic freedoms and an economy recovering from a coronavirus pandemic.

Republicans turned to several high-profile women to highlight issues like education, health care and the effort to combat the opioid crisis as a way to win back support from female voters, specifically suburban women, who helped the GOP win the White House four years ago.

As polls continue to show the president trailing Joe Biden, the Trump campaign worked to make the November election a choice between two starkly different visions for America’s future, rather than running on the president’s record over the past four years.

Here are three takeaways from the third night of the RNC:

1. Republicans highlighted a law-and-order message as the nation grapples with racial unrest that speakers didn’t acknowledge

Convention organizers planned a focus on law and order, with a lineup of top Republicans describing the party’s commitment to law enforcement and support for the “thin blue line.”

But a dizzying series of developments once again focused the nation’s attention on issues of systemic racism and injustice. Jacob Blake, a Black man in Kenosha, Wis., was shot multiple times in the back by police on Sunday. The episode, caught on video, spurred protests in Kenosha for the past four nights, and Kyle Rittenhouse, a white male teenager, was arrested for killing two people at a protest.

In the hours leading up the convention, NBA teams boycotted playoff games, and Major League Baseball postponed some games.

Pence was the one speaker who did make a reference to the situation in Wisconsin, but he didn’t acknowledge the serious blowback that it triggered in communities across the country, or offer any commitment to address the underlying issues.

Instead he grouped it in with mentions of other incidents across the country in recent weeks. “Let me be clear: the violence must stop — whether in Minneapolis, Portland or Kenosha,” he said.

He vowed that the Trump administration stood for cracking down while Democrats didn’t favor a hard line. “We will have law and order on the streets of America. Joe Biden would double down on the very policies that are leading to unsafe streets and violence in America’s cities.”

He also warned, “You won’t be safe in Joe Biden’s America.” As they did earlier in the week, Republicans inaccurately argued that the Biden-Harris ticket would defund the police.

While Pence and other Republicans focus on violence related to protests, the demonstrations grew from outrage over police brutality, particularly shootings of Black people. The Trump administration’s use of the military to crack down on protests has also drawn criticism.

Several speakers used heated rhetoric about crime and threats to the suburbs — a strategy the president’s campaign has used in campaign ads, before the pandemic shifted the political conversation in the spring.

“From Seattle and Portland to Washington and New York, Democrat-run cities across this country are being overrun by violent mobs. The violence is rampant. There’s looting, chaos, destruction and murder. People that can afford to flee have fled. But the people that can’t — good, hard-working Americans — are left to fend for themselves,” South Dakota Gov. Kristi Noem said.

While the mostly taped segments on Wednesday didn’t have time to specifically weigh in on the developments in Kenosha, several Black speakers were featured to push back on Democrats’ claims that President Trump is racist, and reach out to those who may feel uncomfortable with some of the president’s rhetoric.

Clarence Henderson, one of the civil rights activists who was part of sit-ins in the South in the 1960s, vouched for the president. “His policies show his heart. He has done more for Black Americans in four years than Joe Biden has done in 50,” he said.

Only 17% of registered Republican voters are nonwhite, according to data from the Pew Research Center. In comparison, 40% of Democratic voters are people of color.

President Trump’s support from both college-educated and working-class white women helped him win key battleground states in 2016, but it has dropped significantly.

Kayleigh McEnany, White House press secretary, recounted her personal story of deciding to undergo a preventative double mastectomy in 2018 after being diagnosed with the genetic condition for breast cancer.

She said the president called her even though she had only met him a few times, saying she was “blown away” by his personal interest. The story was part of an attempt to show a softer side of the president. “I know him well now and I can tell you that this president loves the American people, stands by Americans with preexisting conditions, and supports working moms,” she said.

McEnany did not acknowledge that the Trump administration is supporting a lawsuit that would dismantle the requirement that insurers provide coverage to those with preexisting conditions.

Kellyanne Conway, who was the first female campaign manager to run a successful presidential campaign, cited Trump’s willingness to appoint women to top positions. She also addressed the opioid crisis, a crippling epidemic that has hit communities across the country.

“Rather than look the other way, President Trump stared directly at this drug ‘crisis next door’ and, through landmark, bipartisan legislation has helped secure historic investments in surveillance, interdiction, education, prevention, treatment and recovery. We have a long way to go, but the political inertia that cost lives, and the silence and stigma that prevents people in need from coming forward is melting away,” said Conway, who is stepping down at the end of the month.

Although the president and most speakers so far this week have largely avoided talking about the coronavirus pandemic, Pence, whom the president tapped to head up the coronavirus task force, followed first lady Melania Trump’s move to connect with people who are struggling after months of uprooted routines and economic hardship.

“After all the sacrifice in this … year like no other — all the hardship — we are finding our way forward again,” Pence said. “But tonight, our hearts are with all the families who have lost loved ones. We mourn with those who mourn, and we grieve with those who grieve.”

3. Republicans tried to shift the November election from referendum on Trump to a choice between starkly different visions

Reelection campaigns are traditionally a referendum on the incumbent president, but the Trump administration’s handling of the coronavirus in recent months has given Joe Biden a consistent lead in both national polls and polls in key battleground states.

Unable to gain traction on the administration’s record in recent months, the Trump campaign reverted to a traditional approach of framing the election as a choice — with speaker after speaker on Wednesday maintaining that Democrats were prepping a massive shift to government control over all aspects of life and trillions in dollars of tax increases, while the Trump-Pence ticket was preserving freedom and a good economy.

“Joe Biden would be nothing more than a Trojan horse for a radical left,” Pence said.

Iowa GOP Sen. Joni Ernst also used the frame in her remarks. “Freedom, prosperity and economic growth under a Trump-Pence administration; or the Biden-Harris path, paved by liberal coastal elites and radical environmentalists. An America where farmers are punished, jobs are destroyed and taxes crush the middle class.”

This strategy continued Tuesday night’s effort to juice the GOP base, with dire language. “Joe Biden would set America on a path of socialism and decline. But we’re not going to let it happen,” Pence pledged. (Read more about the rhetoric around “socialism” here.)

This effort is likely to be an uphill battle for the GOP. The Democratic ticket has worked to avoid getting into specific policy proposals and instead stuck to a slogan of “fighting for the soul of America.”

Progressive Democrats who have pushed for major new federal programs like “Medicare for All” and the Green New Deal have been frustrated that Biden hasn’t backed those sweeping proposals.

Biden emerged from the wide Democratic primary field as the more pragmatic choice who would be less vulnerable to attacks from the president, and more palatable to wavering independents and Republicans who are concerned about Trump’s policies, or more recently, his handling of the coronavirus.