Pence Starts 2020 Push For Trump On I-4 Corridor 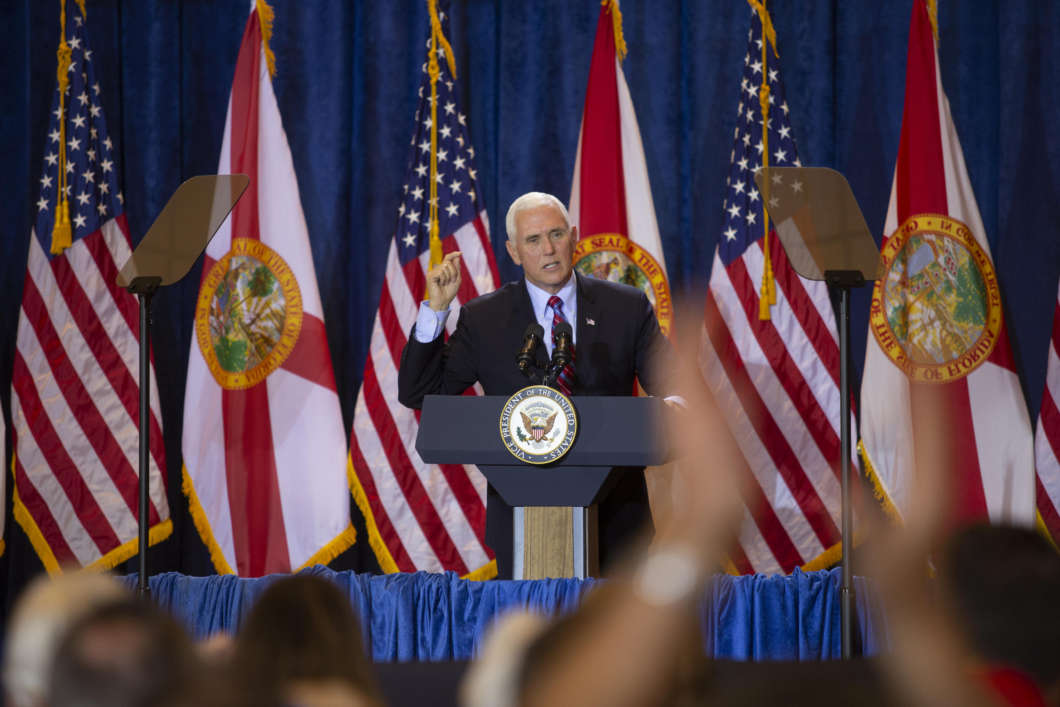 So many people tried to get into the first rally at an events center in Tampa that more than 50 people were turned away. One of those who made it into the mostly older, white audience was Mike Grellis, a Navy veteran living in Parrish, in Manatee County.

Grellis, who wore a Trump wool cap atop his cowboy hat, said his major issues include supporting veterans and keeping fracking for oil going, which he says most Democrats oppose.

“We have to take care of our veterans and we have to keep our fracking going in the United States, so we’re more independent on oil and gas,” Grellis said. “The biggest issue is going to be the border wall, securing our borders, keeping us safe – the drug trafficking, the child trafficking.”

Lisa Wallace, who lives part-time in Tampa and Michigan, is worried about her vote not counting.

“I am just concerned about the voting,” she said. “I’m afraid that the Democrats are going to cheat. However they can do it, that’s what my concern is, they’re going to try it.”

Mary Sylvester of Wesley Chapel says having President Trump take care of the working class is her top concern.

“Just making sure that Donald Trump is re-elected,” Sylvester said. “I think he’s awesome for the country and he cares for the people of the United States – and the veterans.”

Pence concentrated much of his half-hour speech in Tampa to familiar  – and popular – themes of beefing up defense, taking on Iran and “radical Islamic terrorism” and border security.

But even he couldn’t ignore the ongoing political saga going on in Washington, D.C. As Pence spoke, Senators were being sworn in for the impeachment trial of President Trump. It starts on Tuesday.

Pence also spoke about the passage of the revised North American Free Trade Agreement with Canada and Mexico.

“Just about an hour ago, the United States Senate passed the biggest North American trade deal in history,” he said.

The trade deal passed with overwhelming support in the Senate – including most Democrats. But one prominent Democrat didn’t.

“I heard that Chuck Schumer didn’t vote for it,” Pence said. “He led a minority of 11.”

After Pence finished his speech in Tampa, he traveled to Kissimmee, for a “Latinos for Trump” rally.  It’s just 20 miles from Orlando where Trump announced his reelection campaign last summer, and Pence was appealing to the region’s large population of Latino voters.

At a “Latinos for Trump” event at the Nación De Fe church in Kissimmee, the Vice President touted the administration’s aid to Puerto Rico, recognizing Juan Guaido as the Interim President of Venezuela, and building an economy that supports more jobs and higher incomes for Latino-Americans.

For Gian Ruiz, a 28-year-old Army veteran, it’s that strong economy that got his support.

“So whatever brings work and jobs and helps the economy and helps Latinos in this country is something I’ll always support,” he said.

Arbert Esperon, a business owner who moved to Florida from Puerto Rico, supports the president’s efforts to protect the economy.

“I also support his policies on how to protect the American people from the intrusions of other countries like China, what they were doing, stealing our intellectual property and all that stuff. I support all those policies,” he said. “Those are common sense policies.”

In his speech, Pence touted the administration’s commitment to securing the border. That got the attention of Richard Marrero.

“I want immigrants to come to our country, but I think it should be done fair. There’s a process in place, it’s been in place for as long as I know, and it’s just not fair that there are other people cutting in front of people who are in the line,” Marrero said.

He said he wants his community to never forget the administration’s delayed response to natural disasters.

“So don’t tell me that you love my people when they’re sleeping on the ground, mattresses on the ground, in the open, because they haven’t responded yet for requests for help,” he said. “Don’t tell lies.”

This story is part of the I-4 Votes project, a collaboration between the NPR stations in Tampa and Orlando. The project will spend 2020 focusing on the issues that matter to voters as they decide who they want to be president of the United States.