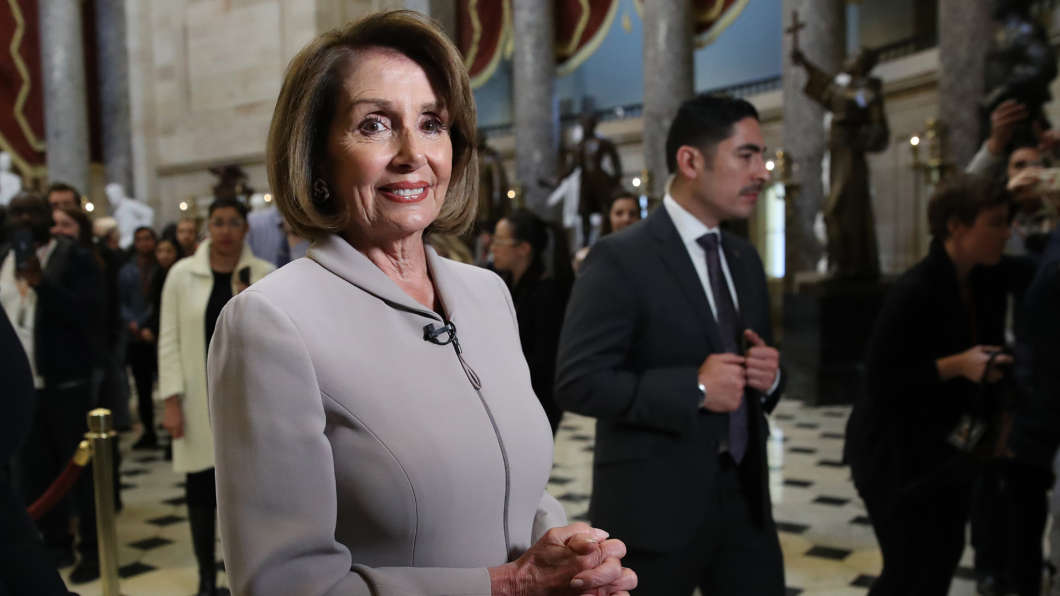 Nancy Pelosi, D-Calif., is expected to be elected the next speaker of the House of Representatives on Thursday.
Image credit: Win McNamee

There are going to be a lot of new faces wandering the halls of the U.S. Capitol Thursday. Nearly 100 newly elected lawmakers are coming to the House and Senate — including those representing the 40 seats the Democrats picked up to sweep their party back into power in the House.

They are expected to be led by Nancy Pelosi, who after Thursday’s official vote would return to the job of speaker of the House after eight years leading Democrats in the minority. Pelosi made the record books in 2007 when she became the first woman ever elected speaker and she would be doing it again Thursday as the first person to return to that job since Sam Rayburn in 1955.

Pelosi takes the gavel in the midst of a nearly two-week partial government shutdown over President Trump’s demand for more than $5 billion to build a wall on the southwest border with Mexico. Democrats plan to launch their new majority with votes on a package of bills to end the shutdown and reform the rules of the House.

According to excerpts of her opening speech released from Pelosi’s office she will stress plans to “debate and advance good ideas no matter where they come from” and will note the spending bill that will get a vote late on Thursday was one supported by Senate Republicans.

Pelosi will promise, according to those prepared remarks, “that this Congress will be transparent, bipartisan and unifying; that we will seek to reach across the aisle in this Chamber and across the divisions in this great nation…. the Floor of this House must be America’s Town Hall: where the people will see our debates, and where their voices will be heard and affect our decisions.”

The vote to reopen government is expected to sail through with a majority of Democrats supporting six bipartisan spending bills that fund most closed agencies through September and a short-term extension of current funding for the Department of Homeland Security. Pelosi says the legislation give Republicans a chance to reopen government and keep working on border security, which is funded through DHS.

That party unity may begin to crack quickly when it comes to the new House rules. A small group of progressives, including California Rep. Ro Khanna and incoming New York Rep. Alexandria Ocasio Cortez, say they’ll vote against the rules. They object to a provision that would require Congress to offset new spending through a provision called pay as you go, or PAYGO.

Traditional budget economists and incoming House Rules Committee Chairman Jim McGovern, D-Mass., say Democrats can, and often do, waive the rule Ocasio-Cortez and Khanna oppose. Progressives are divided amongst themselves on the issue. Congressional Progressive Caucus co-chairs, Reps. Pramila Jayapal, D-Wash., and Mark Pocan D-Wis., say they will support the rules package despite the budgeting concern.

“Chairman McGovern and House Leadership have committed to us that PAYGO will not be an impediment to advancing key progressive priorities in the 116th Congress,” the co-chairs said in a statement. “With the assurances that PAYGO can be waived, we do plan to vote for the House rules package and proceed with legislation to fix the statute.”

The fight over rules will be the first of likely many inter-party squabbles among Democrats as they try to satisfy the demands of an ideologically and demographically diverse coalition.

Other rules changes included in the package could significantly impact how the House operates. One revives a rule that would automatically raise the nation’s borrowing authority once a budget is approved — lowering the threat of partisan confrontations about the debt ceiling. Another changes the process for attempts to force out a sitting House speaker. And Democrats also plan to vow lawmakers will get 72 hours to review any legislation before it gets a floor vote.