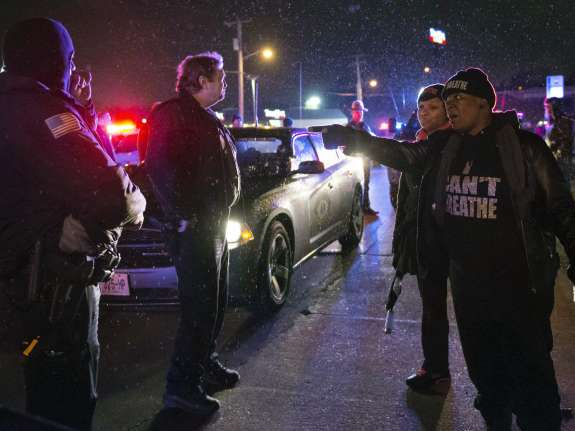 A vigil and a march in Berkeley, Mo., were largely peaceful overnight after confrontations between police and protesters Tuesday in the wake of the fatal shooting of an 18-year-old black man by a white police officer.

Antonio Martin was shot and killed on Tuesday after police say he pointed a gun at the officer.

Dozens of protesters held a vigil late Wednesday at the gas station in the St. Louis suburb where Martin was killed. The gatherings were mostly peaceful in contrast to the night before when, as we reported, a few hundred protesters engaged in an uneasy standoff with police. Although no major injuries were reported, some police cars were damaged.

Wednesday night, authorities say they did intervene at one point to stop several people from trying to break into a beauty supply shop.

The St. Louis Post-Dispatch says that about 75 people staged a peaceful protest early Christmas morning outside a nearby church and that police in riot gear were present.

The shooting of Martin comes after this summer’s killing of 18-year-old Michael Brown, who was unarmed, in nearby Ferguson, Mo., by white police officer Darren Wilson. The Brown shooting, and a decision by a grand jury not to indict Wilson, sparked nationwide protests.

Speaking on Wednesday, Missouri Gov. Jay Nixon said that the death of Martin showed that “the events in Berkeley are a reminder that law enforcement officers have a difficult, and often dangerous, job in protecting themselves and law-abiding citizens.”