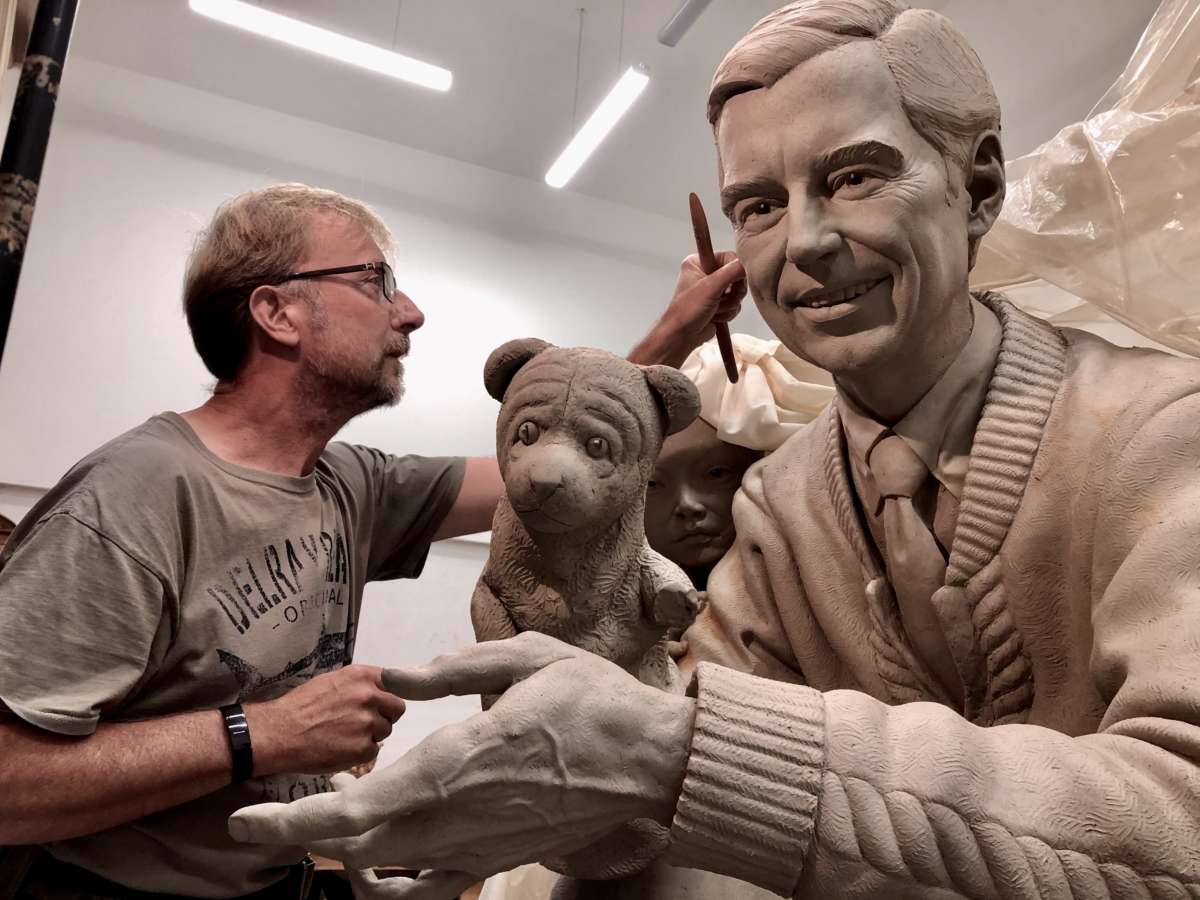 Paul Day works on a clay model for his sculpture of Mr. Rogers. Photo courtesy of the artist.

In October a new sculpture of Fred Rogers was unveiled at his alma mater, Rollins College. The sculpture which stands about seven feet tall and weighs about 3000 pounds, depicts him talking to a group of children on his TV show, Mr Rogers Neighborhood.

WMFE’s Matthew Peddie spoke with Day in August, as the sculpture was being shipped across to the United States.

Day, who lives in France, says the project came about from a chance encounter with a Rollins trustee, Alan Keen and his wife, Linda, who visited Day’s studio while on vacation and asked if he would create the sculpture for the college.

Day says he knew nothing about Mr. Rogers before he started researching the piece. Googling Fred Rogers led to “an epiphany,” he says.

“ I had never heard of him, never heard him speak, never seen a picture of him and all of a sudden, my computer screen was awash with images of Fred and his puppets. And of course videos of previous episodes of what I came to learn was Mr. Rogers Neighborhood. I was bowled over by this man and by his incredible wisdom and generosity of spirit and intelligence and educational prowess.

Day says the project became a personal quest for him after meeting with Fred Rogers’ wife Joanne, who passed away earlier this year. He wanted the sculpture to evoke something different from two statues depicting Mr. Rogers in Latrobe, PA and Pittsburgh, PA.

“I felt that what was missing in those statues was something that tells the story of who he was,” says Day.

“I felt that the sculpture would be something that’s going to outlive the memory of him among people who are alive today, quite possibly. And therefore it should in some way, explain itself, show him doing what he did best, and why he became so loved.”

The piece that will sit on the Rollins College campus depicts Mr. Rogers seated and talking to a group of children, with his puppet Daniel Striped Tiger on his hand. Day says he was inspired by scenes from the TV show and the documentary ‘Won’t You Be My Neighbor.’

“One of the great things about Fred was that when he spoke to a child, he spoke to that child as a human being, not as a child, but as somebody with whom he could have a deep and meaningful conversation, albeit on their level. But it wasn’t, it wasn’t in any way, an approach that talked down to children.”

This interview first aired on Intersection in August