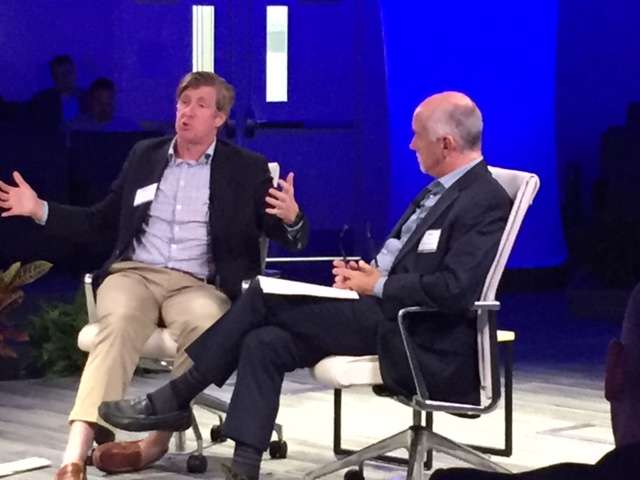 Patrick Kennedy, left, talks to a panel of health care industry workers in Orlando about his experience with addiction.

Patrick Kennedy has gone from lawmaker with an active addiction to mental health advocate.

Kennedy is the son of the late U.S. Senator Ted Kennedy and nephew of John F. Kennedy, and was co-sponsor of the Paul Wellstone and Pete Domenici Mental Health Parity and Addiction Equity (MHPAE) Act of 2008. That bill required insurance companies to treat mental health and substance abuse the same way they treat other health care issues.

Kennedy spoke with 90.7 Health Reporter Abe Aboraya, and started by talking about his addiction. Hit play to listen to the full interview.

KENNEDY: “I was addicted to opioids. I had surgery in my early 20s, a very big surgery, 14-hour back and spinal cord surgery. So I had carte blanche with doctors to get prescribed opioids, and this was before prescription drug monitoring. So I was essentially doctor shopping myself. I had a number of physicians prescribing OxyContin for me. In later years, I bought OxyContin off the street. And yet I was under the delusion that because it was a medication, I wasn’t really in trouble because I wasn’t, for example, buying heroin.

ABORAYA: When you’re talking about having frank, open conversations about this, what would you say to someone with a family member or is going through their own struggle about coming out with it?

KENNEDY: It’s very, very difficult. Because no matter how much you tell people these are brain illnesses, there’s so much shame and stigma when talking about them because of how it reflects on a person. … I would encourage people to get treatment. Obviously these are deadly illnesses. People die of suicide at twice the rate of homicide, and of course overdoses are epidemic. So get help right away.

ABORAYA: Florida’s governor as well as President Trump have said that the opioid crisis is a national epidemic. What more do you think needs to be done? What would you like to see done at the national level and the state level?

KENNEDY: Well first of all, Gov. Rick Scott is a disgrace. He said he was declaring a state of emergency, but he cut the funding for mental health and addiction care once he got federal dollars. He fought the expansion of Medicaid, which could have covered so many more Floridians. He’s ideological in this approach as opposed to practical. As someone who ran a large health system and hospital system, he should know better. He does know better.