Communities Near Parramore Brace Themselves for Development 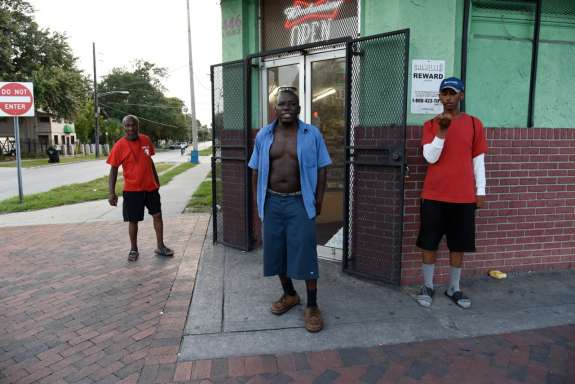 Construction on a new soccer stadium has opened Orlando’s historically black Parramore community to a wave of change.

Long-time residents teeter between fear and hope. Some fear they will be swept up and forgotten. Others hope they will see better opportunities in the blighted area.

But as development sets in Parramore, it is also creeping west toward the Washington Shores and West Lakes communities.

90.7’s Renata Sago spoke with residents there who are bracing themselves for change that’s headed their way.

Pick a place on the map and chances are, Lynn Nicholson has been there or is planning to go. For decades, a travel bug carried him from Washington to New York to Africa. He could have settled anywhere to retire, but fondness led him to one of Orlando’s few remaining historic black areas.

“I got a good feeling the first time I walked in Parramore,” he remembers.

Parramore was small. Neighbors knew each other. It reminded the 72-year-old of his native Tennessee.

But that was more than a decade ago—well before the Amway Center was built footsteps from his town home and before the wave of excitement about a new soccer stadium just blocks away.

Nicholson and his six neighbors, a mix of working and retired homeowners, stand out within a mile-long radius of double-digit unemployment and homelessness.

“Looking at it, like ‘Wow, this happened to us?’ I’m talking about the community as a whole. Will it just cease to be? Will it become a commercial endeavor? What about the single family homes—will we still be able to remain there? Will we be pushed out?” he asks.

It is bittersweet change that Nicholson and others embrace at neighborhood planning meetings, but it’s led  disillusioned residents to fall silent.

“They just don’t believe that their input is worthwhile as a whole now, but I believe in sitting at the table even if I’m mute,” he adds.

Less than two miles from Parramore, Bishop Allen Wiggins is hosting a gospel karaoke night at a youth center in Washington Shores.

He is convinced it’s two decades too late to sit at the table to discuss Parramore’s plans.

“Parramore is a part of downtown now,” Wiggins says. “It’s like trying to jump on a train that’s already left.”

Wiggins pastors a 700-member congregation at Hope Church. It buys, rehabs, and rents housing to low-income residents. It’s the force behind the area’s new Walmart and a mixed-income apartment complex that’s in planning.

Wiggins wants to make sure his area doesn’t become Parramore. His vision is to make Washington Shores a self-sustaining black neighborhood that is as competitive as Lake Nona; where residents are involved in—not threatened by—development.

“Traditionally, we’re not at the table and we find out the news on the news of what’s going to happen as a part of being part of the process,” Wiggins says of black communities.

He has partnered with LIFT Orlando, a group of business owners working within Parramore’s surrounding communities to bring homes and jobs.

“We who may not be in Parramore might have to invest in the black entrepreneurs who are trying to upstart businesses as well as other initiatives so that Parramore can be preserved.”

That is why Tangia Smikle and three other residents formed the West Lakes Council this year. The group represents seven black neighborhoods surrounding Parramore, including Rock Lake, Clear Lake, and Lake Lorna Doone where Smikle’s parents were some of the first blacks residents to settle in the 1950s.

“Change is inevitable,” Smikle says. “We know it’s going to happen, but it does not have to look like downtown. We can figure out a way that everybody can make money, but we don’t have to lose every bit of who we are.”

The council supports more than a thousand residents. It is working with Bishop Wiggins, LIFT, and the city to plan what comes in and goes down in the area.

But still, there distrust from her neighbors about outsiders coming in and whether their area could become another Parramore.