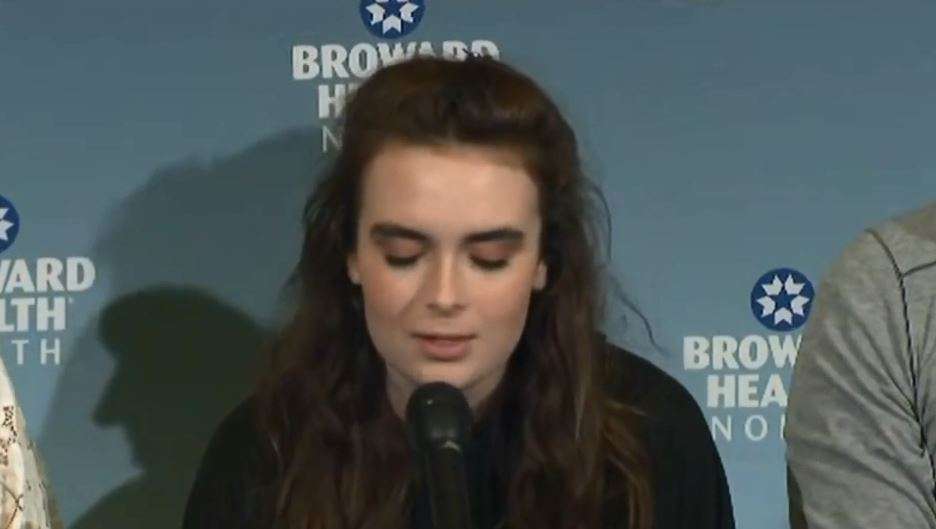 Parkland shooting survivor Maddy Wilford, talking to the media at a press conference. Image from the trailer for "Parkland: Inside Building 12"

“Parkland: Inside Building 12” takes audiences into one of the deadliest school shootings in U.S. history. Seventeen people were killed in the shooting at Marjory Stoneman Douglas High School on February 14, 2018. The documentary, which begins a one week run in Orlando Friday, features interviews with survivors of the tragedy. Director Charlie Minn talks to Intersection about the film’s significance.

Minn said his intention in making the documentary was to give a voice to the victims of the massacre and the survivors who have quietly suffered while news coverage of the shooting focused heavily on both the shooter and a handful of student activists.

“So far, the attention towards this mass shooting has been on the killer unfortunately. I’m trying to change that — I don’t mention the killer’s name once in the film. And a lot of the attention has been on the activists who were not even in inside the building when it happened. We need to hear from the people who were literally ducking bullets, getting shot, watching their classmates get murdered, running, hiding, praying, you name it,” Minn said.

“Inside Building 12” shows audiences explicit crime scene footage from the freshman building as the shooting took place. The decision to include actual footage was deliberate on Minn’s part in an effort to show the reality of gun violence. He agreed to blur some of the footage after receiving  complaints from family members of the victims prior to the film’s release.

Minn said he was surprised when the film was “wildly praised” upon release in South Florida last October.

“I had a lot of people reaching out to me. Finally, when the film got made, I went on television … and I basically looked at the camera and I said, ‘Floridians, give me a chance, that’s all I’m asking. Judge the film after you see it, not before, because if you judge a film before you see it, that’s not fair, and I’m not quite sure what you’re judging,’” Minn said.

The film is Minn’s 27th and continues his commitment to documenting the victims of mass tragedies. Minn also directed “49 Pulses,” the 2017 documentary about the Pulse nightclub massacre. “Inside Building 12” previously ran in theaters in South Florida, New York and Texas.

“Parkland: Inside Building 12” premieres at the Fashion Square Premiere Cinema 14 on Friday, Jan. 18, for a minimum one-week run.