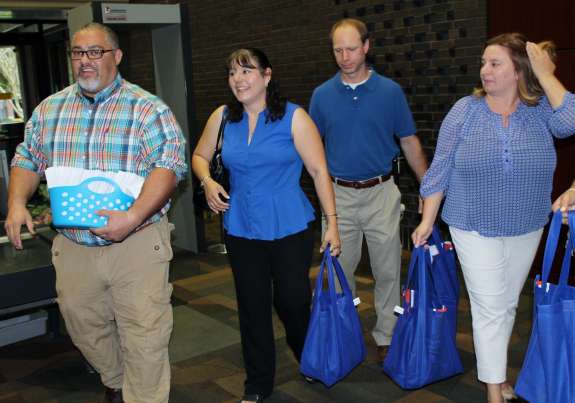 Members of "United for a Middle School" delivered 2,800 letters in support of a relief school for Avalon Middle School. Photo: Renata Sago.

A handful of parents walked into the Board of County Commissioners carrying bags with over 2,800 letters of support for a new middle school. The parents are part of United for a Middle School, a group that is urging commissioners to curb overcrowding at Avalon Middle School by approving a relief school in nearby Timber Springs.

Avalon Middle School is now at nearly double its capacity. Some instruction takes place in portable classrooms, which parents say is unsafe.

“Fire drills, being able to get to an inside classroom if there’s a severe weather emergency—all of those kind of logistical things could be a big concern with an overcrowded campus,” said parent Jessica Benscoter.

She and her husband James have two daughters who will attend middle school in a few years. While safety is an issue for them, they are also concerned about the quality of education their children could receive.

Residents in the nearby Timber Springs Homeowners Association say there is not enough land in the zoning agreement to build a middle school. They also believe traffic could be a big problem.

The Orange County Commission will vote on the issue next month.