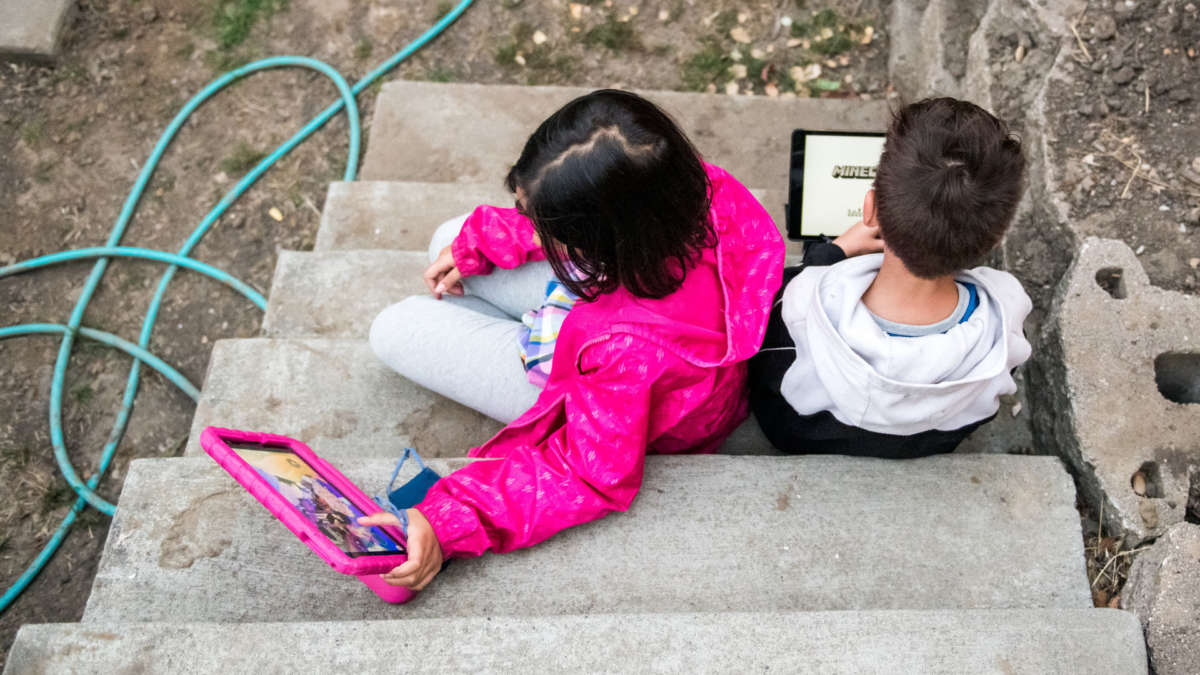 Eight-year-old twins Kenley (left) and Anakin Gupta have struggled with loneliness during the pandemic, but the isolation has been much more acute for Kenley.
Image credit: Beth LaBerge

As a toddler, Kenley Gupta stopped speaking after her mom died. Over the years, she recovered from the anxiety disorder, called mutism, but in March the 8-year-old went silent again.

The change occurred soon after her school shut down, and Kenley was shocked when her school closed.

“I was really sad I couldn’t see my friends,” she said.

She was normally a social butterfly and a good student. But after the pandemic forced the school to adopt full-time distance learning, Kenley often crumpled into a ball and hid under her blanket. She would clutch Green Guy, her favorite stuffed animal. Most of the time she refused to talk. The few words she did utter were expressed in Green Guy’s cartoon voice.

Instead of logging onto Zoom for classes, she spent much of the day gaming — glued to a hot pink iPad. She also stopped drawing and started to eat more.

“There was a kind of almost compulsive snacking that I had never seen before,” said Jay Gupta, Kenley’s dad.

As a single father, he’s struggling too. Jay is trying to juggle his job as a philosophy professor at a local college and keep Kenley’s twin brother, Anakin, on track as well. Anakin doesn’t like distance learning either.

“I much prefer real school because I’m an energy boy,” he said. “Home school, I just sit on the couch and say ‘blaah.'”

Though Anakin’s mental health hasn’t declined during the lockdown, the 8-year-old did fall behind in his school work as the months passed.

Even before the coronavirus hit, mental health problems such as depression and anxiety were on the rise in children ages 6 to 17, according to the Centers for Disease Control and Prevention. Research shows social isolation can make these symptoms worse.

Currently there’s little hard data about how the pandemic is affecting children’s mental health, mostly because the outbreak is still unfolding and research takes time. The little that scientists have measured is worrisome.

A national survey conducted late last spring of 3,300 high school students found nearly a third reporting they were unhappy and depressed “much more than usual” in the past month. Almost 51% said they felt a lot more uncertainty about the future as well.

Overseas, in a survey of 1,143 parents measuring the effects of the lockdowns in Italy and Spain, nearly 86% reported changes in their children such as difficulty concentrating and spending more time online and asleep, and less time engaging in physical activity. A study of 2,330 schoolchildren in China found both anxiety and depression rose compared to rates found in previous investigations.

There’s plenty of anecdotal evidence to corroborate these trends.

Her school-based clinic recorded more youth suicide attempts in the first four weeks of the pandemic than it did in the entire previous year, she says.

“Give yourself as much permission as possible to relax,” she said. “Rest. Reset. Restore.”

“There are students who garden there three days a week growing kiwis and red peppers,” she said.

She quoted one teen who was looking on the bright side. “‘If it weren’t for COVID, I wouldn’t be sticking my hands in the dirt for the first time,'” she said.

The Gupta family turned a corner over the summer when the twins enrolled in a daily outdoor camp. Within weeks Kenley rebounded and was back to her old self.

The increased social interaction paved the way for a soft landing when the twins returned to distance learning in the fall. Both kids are in therapy. Kenley recently started drawing again.

She still sulks, battling a kind of internal silent storm, as her father describes is. But Jay Gupta is discovering new ways to help Kenley cope. For instance, if someone in the family sits next to her during Zoom classes, she pays closer attention. Just the simple presence of someone familiar keeps her anchored.

Jay looks forward to the day when Kenley is supported by her teachers in person again,.

“I’m all for opening the schools,” he said, as long as it’s done safely.