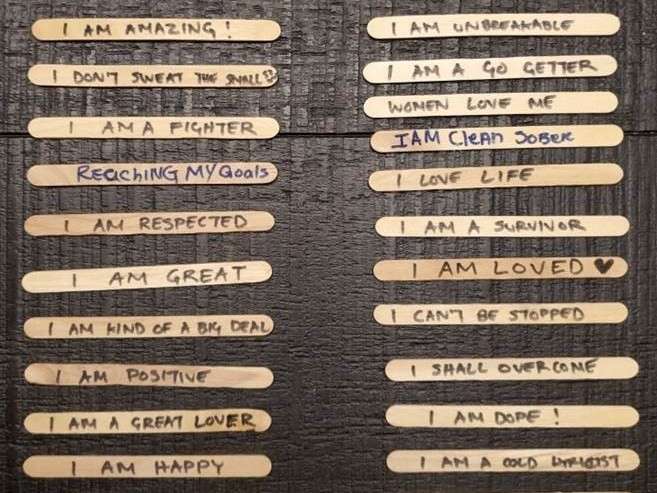 Before he died, Brandon Cullins used these popsicle sticks to fight his urge to use drugs.

After their son died, Jackie and Robert Watson found a stack of popsicle sticks in his Milwaukee apartment. He’d written an affirmation on each one.

Brandon Cullins, 31, had been working with a drug counselor, who advised him to write the messages to himself.

Picking up the popsicle sticks, the Watsons were able to see how hard their son wanted to kick his battle with cocaine. But they also wondered why he hadn’t asked them for help.

“We saw him losing weight and acting differently and we would approach him and talk to him about it and it was always a denial,” said Jackie Watson.

Cullins had three children and a contagious smile. His death in January 2020 came after years of fighting his addiction.

“It doesn’t seem real,” Jackie Watson said. “He was so full of life and so happy. He was trying. He was struggling but really trying to get better and trying to fight that.”

The Cullins’ case reflects what is happening across the United States as the nation faces a grim milestone of having a record number of overdose deaths in 2020.

Dr. Michelle Maloney, executive director of addiction services at Rogers Behavioral Health, said for many people, the pandemic has amplified mental health and financial issues. And social isolation has also increased the risk of dying from an overdose.

“I know of several individuals who had been in recovery and those struggled then with wanting to relapse,” Maloney said.

Rogers is based in Wisconsin and has locations in nine states across the country including Wisconsin, Minnesota and California.

When people are using substances, they are often hiding it, so in normal circumstances families struggle to understand what is going on.

Addiction support organizations like Shatter Proof and the American Society of Addiction Medicine have seen this play out, because addiction is a disease of despair.

Paul Earley, president of ASAM, said staying in contact with someone who has a substance use disorder is so important during this time, even if you’re angry, or you think they’re in remission.

“Now is not the time for what we used to call tough love,” Earley said. “That is not the approach to use during this time at all, because you run the risk, especially if they are using an injectable drug, that they could overdose and die.”

Jess Keefe is the director of digital advocacy with Shatter Proof. She was living with her brother, Matt, when he died of a heroin overdose in 2015.

She said all families go through a grieving period asking themselves what they should have done differently.

Cullins overdosed twice before he died. But those times, he wasn’t alone. His parents have asked themselves if they were wrong to let him get his own apartment.

But Keefe said giving a person with a substance use disorder independence demonstrates love.

“When our loved ones are going through this, we want to babysit them in these ways, and we want to keep our eyes on them all the time to make sure they are OK,” Keefe said. “A lot of times people going through substance use disorders can feel like they are being treated paternalistically.”

It has been almost a year since Cullins died. His parents have had to acknowledge his birthday and celebrate Christmas without him.

Cullins’ popsicle sticks with his messages of affirmation were displayed during his funeral and empty sticks were available for people to write their own words about Cullins.

The Watsons now keep those at their house to remember their son.

The American Society of Addiction Medicine and Shatterproof have developed a tool to recommend a treatment type to begin access to professional resources for people struggling with addiction.