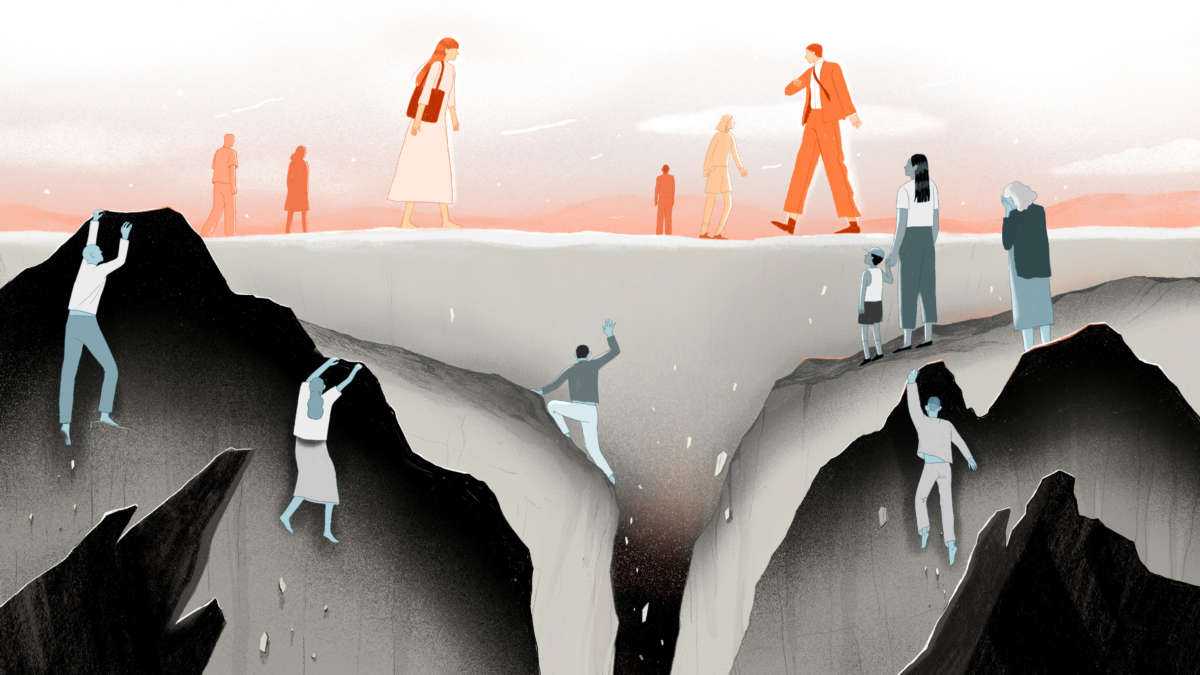 Cynthia Maclin cannot get out of bed most days.

Chronic lung disease leaves her short of breath and ended her 45-year career as a medical administrator. COVID-19 cases are on the rise in her hometown of Chicago, and Maclin’s already lost eight friends and family members to the virus, including the father of her two daughters. For the first time this month, she’s also unable to pay rent.

So Maclin, 66, feels the crush of grief, loneliness, depression and financial stress — but she hasn’t been able to see her doctors.

“I have not seen my pulmonary doctor to listen to my lungs, to check my oxygen levels,” says Maclin. She hasn’t seen her psychiatrist, or her primary care doctor. “All these things have an impact,” she says, through labored breaths.

Maclin is just one among many in the U.S. facing a cascade of economic and health-related problems revealed in a new survey by NPR, the Robert Wood Johnson Foundation and Harvard’s T.H. Chan School of Public Health. The poll finds nearly half the households in America — 46% — report facing serious financial pain during the pandemic — a problem that is more acute in the four largest U.S. cities, and among Latino and Black households. Hundreds of billions in government stimulus and other support did not make an apparent dent in their struggles.

In addition, over half, or 54%, of those with household incomes below $100,000 reported serious financial problems, compared to only 20% of those with incomes above that threshold.

In short, the results show the personal financial challenges run deeper and broader than previously understood, says Robert Blendon, professor emeritus of health policy and political analysis at Harvard and co-author of the survey. “I would have expected that all the aid that was coming from various sources would have narrowed, not eliminated, the differences by race and ethnicity,” but it did not, he says.

At the time of the survey, the federal government was offering $600 a week in additional benefits for the unemployed. That was not renewed after July. That means things have likely gotten worse.

‘Nothing … to fall back on’

“It’s going to get worse because there is nothing for the people we surveyed … to fall back on,” Blendon says.

Depending on which city, anywhere from 50% to 80% of Latino and Black households in New York City, Los Angeles, Chicago and Houston report serious financial problems — such as depleted savings, the inability to pay rent or mortgage, or pay their credit cards. Many, like Maclin, also say their health has worsened after medical care they needed was put off.

For Maclin, the financial woes seep from one area of her life to another. The battery in her truck recently died, for example — transport she relies on to get food and medicine. She used some of the $1,200 federal stimulus money to fix it, but that money is now long gone, and she still has bills she can’t pay.

“I try so hard not to cry,” says Maclin, who lives alone. “I have nine grandkids and seven great-grandkids — I would love to see them, but I can’t,” she says, weeping.

A lot of people facing multiple health and financial problems have been turning to the Legal Aid Foundation of Los Angeles in recent months. The nonprofit helps low-income families on a range of issues, from employment and housing to medical benefits.

“There is a minimum of at least three issues per phone call, whether it is housing insecurities … because of their loss of job, or they’re dealing with food insecurity,” says Ronnette Ramos is a managing attorney at the foundation. That’s magnifying health conditions as well, leading to higher anxiety and blood pressure among clients, she says.

Many landlords, some dependent on rental income to survive, are feeling the pinch, along with their tenants. Ramos says the landlords of some of her clients are trying to find ways around the state and federal moratoria on evictions — and that is exacerbating an already huge housing crisis in L.A.

“Renters pay more than 50% of what they make towards rent, so that doesn’t leave much room for life upheaval,” Ramos says. “And we’ve been almost now in six months of life upheaval.”

‘We’re the last people to recover’

In some cases, financial difficulties are forcing people to make big changes.

Gregory Cooper spent 30-plus years in accounting and operations in the oil and gas industry, but had to move out of Houston after more than a year without work.

“I mean, I have an MBA and I have two certifications, but I’m struggling still,” says Cooper, 60, who moved in with his elderly mother in Alexandria, La. He finally landed a government accounting job making about $40,000 a year — half what he used to make. He says it would be terrifying to be without a job right now, because of his age and his race.

Black unemployment rates always run higher than the average, he notes. “We’re almost the last people to recover when it comes to unemployment.”

Cooper says he worries the pandemic is intensifying unrest over the racial inequities in education and employment in the U.S. Yet those dynamics also feel familiar to him: “I see our parents do it, and show us how to make ends meet,” he says. “I think that sometimes is good, versus being born with a silver spoon in your mouth.”

But for some, including Alvaro Castro, 58, financial hardship is a new experience. The married father of two was born in Columbia and for three decades has lived in a suburb of Miami. He made more than $100,000 a year, until he lost his job as a television producer last September. It was April before he found steady work as a contractor, making less than he’d earned previously.

“When you have four people for five months, and only one person is producing, it’s hard,” he says. “Especially with food; it’s quite expensive.”

This spring, he fell behind on mortgage and car payments, as he scrimped and saved on every expense he could think of.

‘I don’t have enough to pay this medical co-payment’

But there were some things they could not postpone. Like his wife’s cataract surgery in April.

“I remember that she called me from the hospital — the clinic — and said, ‘I don’t have enough to pay this medical co-payment,’ ” Castro says. They moved funds around to scrape together the $250 co-payment.

Part of surviving the pandemic, he says, has meant taking a more philosophical approach to life’s problems.