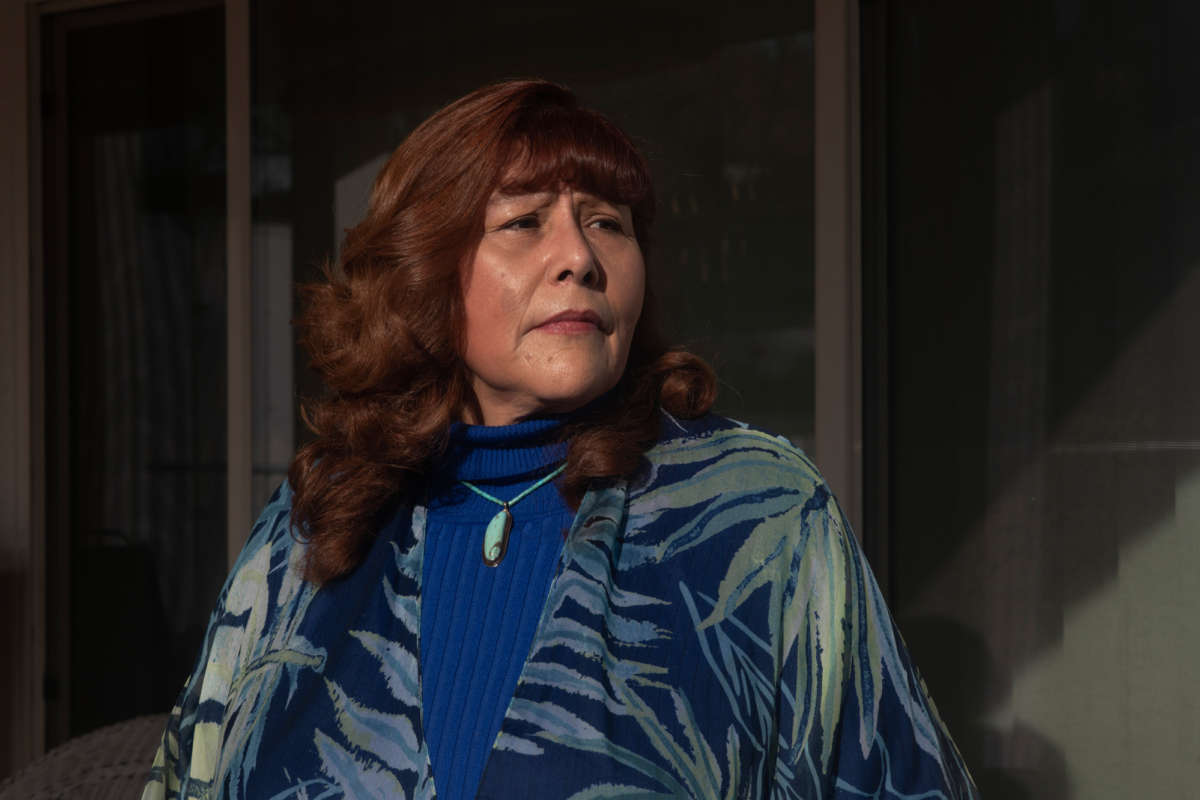 Unless the rules change soon, Stephanie Salazar-Rodriguez of Denver expects to spend more than $10,000 on health insurance premiums this year. That's after losing her job last month — which meant losing her employer's contribution to her health plan.
Image credit: Rachel Woolf

As President Joe Biden’s pandemic relief package steams through Congress, Democrats have hitched a ride for a top health care priority: strengthening the Affordable Care Act with some of the most significant changes to insurance affordability in more than a decade.

The bill would spend $34 billion to help Americans who buy insurance on the health plan marketplaces created by the ACA through 2022, when the benefits would expire. The Senate sent its relief package, one of the largest in congressional history, back to the House where it could come up as early as Tuesday. where it is expected to pass and then go to Biden for his signature.

Those who have studied the legislation say it would throw a lifeline to lower- and middle-income Americans who have fallen through the cracks of the government’s eligibility requirements for ACA subsidies. Stephanie Salazar-Rodriguez of Denver, for instance, is hopeful the changes the federal bill includes will make a difference. Without those changes, she expects to spend more than $10,000 on premiums this year after losing her primary job — and her health insurance — last month.

Under the current system, if her annual income were $3,000 less per year, ACA subsidies could have reduced her premiums to as little as $3,000 a year. But until and unless the COVID-19 relief bill passes, she’s above the cut-off that makes her eligible for ACA health plan subsidies.

“To me, that’s not affluence,” Salazar-Rodriguez says. “You’re talking about people who are struggling to survive.”

The legislation could also provide relief to others who purchase health insurance on the exchanges: people with lower or middling incomes who currently choose policies with lower premiums but high deductibles. Many with high deductible plans often avoid seeking medical care because they don’t have the cash to cover those costs. Most of the nearly 14 million people enrolled in plans sold on the marketplaces would pay less under the new provisions — with the option to use those savings to buy a different plan with a lower deductible.

The Congressional Budget Office also estimates an additional 1.7 million people would enroll in the exchanges under the proposal, about 1.3 million of whom are currently uninsured.

Republicans, who have repeatedly tried to repeal the ACA, have hammered Democrats over the years with allegations that many of the marketplace plans are not affordable and prevent people from buying insurance coverage. They also have argued that the proposed change in the legislation offers unnecessary help to wealthier Americans while doing nothing to lower the cost of insurance.

Now that Democrats have control of the White House and Congress for the first time since the passage of the ACA, they are moving quickly to make changes they believe improves the landmark health care program. Citing the pandemic, Biden opened a three-month special enrollment period the federal health exchange, allowing people to buy new plans there through through May 15.

The COVID-19 relief package under consideration also includes proposals to increase the affordability of health care for the unemployed.

Those receiving unemployment benefits, who are typically ineligible for subsidies on the exchange, would be eligible this year. The Senate version of the bill would pick up 100% of the cost of premiums for those on COBRA, the program allowing recently unemployed workers to privately purchase coverage offered by their former job, often at a high cost. The House had included a similar provision but it provided only an 85% subsidy. According to the Congressional Budget Office, the House’s COBRA changes would cost nearly $8 billion with about 2.2 million people expected to enroll. The version of the bill the Senate has passed would cover the entire COBRA premium.

The legislation, which includes a bevy of anti-poverty provisions, offers a more generous funding match to about a dozen states that have not expanded Medicaid (the program that covers low-income Americans) in hopes that they will soon opt to do so.

Advocates and public health experts say it is critical to help people afford health insurance since millions lost their jobs and their job-based health insurance in the pandemic and another 59,000 Americans, or so, are contracting COVID-19 every day.

About 15 million uninsured people are eligible to buy insurance through the exchanges, most of whom would also be eligible for new or larger subsidies under the proposal, according to KFF. (KHN is an editorially independent program of KFF.)

Under the ACA, subsidies are calculated based on the recipient’s income, age and their area’s average premium costs.

Frederick Isasi, executive director of Families USA, which advocates for health care affordability and supported the passage of the ACA, says that right now more than half of those eligible for coverage cannot afford it. “Health insurance is about financial security and health security,” he adds.

The proposal in the relief bill that was passed by the Senate would ensure that no one who buys a health plan on the exchanges pays more than 8.5% of income for that plan. Currently, subsidies are available only to those making between 100% and 400% of the federal poverty level. (For those seeking subsidies in 2021, that income range that qualifies an individual for a subsidy is between $12,760 and $51,040.)

Some marketplace customers near the federal poverty level who now must pay some of the premiums out-of-pocket could qualify for a subsidy that pays the entire cost of a silver, or midlevel, plan.

The change would also benefit Americans who make more than the subsidy cutoff. About 3.4 million uninsured people fall into this category, according to the KFF analysis.

For example, currently, a 60-year-old who makes $50,000 annually pays no more than $410 per month out-of-pocket for a silver plan on the exchanges, with the government chipping in $548 per month.

Meanwhile, a 60-year-old who makes $52,000 annually – just $2,000 more per year — receives no subsidy under the current rules, and is expected to pay the full premium herself, KFF found, at a cost of about $957 per month for the same plan.

For Salazar-Rodriguez, that cutoff has carried a heavy cost. She was recently laid off from her job at a community health organization that has struggled during the pandemic, and now she pays $913 per month out of her own pocket for insurance.

In a little less than a year, at age 65, she will qualify for Medicare. But for now – and unless and until the COVID-19 relief package passes — her age is a liability. Older, pre-retirement Americans pay some of the highest health insurance premiums in the nation.

Having once worked assisting people enrolling in the health insurance exchanges, Salazar-Rodriguez went straight to the marketplace for coverage when she lost her job. But she was startled to discover how high her premiums would be — and surprised and distressed to see that, because of her income from her other work as a consultant, she is ineligible for a subsidy or Medicaid.

She opted instead for COBRA coverage, which she said was comparable in cost and had more of the benefits she needs than the unsubsidized plans she found on the ACA exchanges in that price range.

Unless something changes soon, she worries she will have to run up her credit card and find extra work to afford her premiums. The pandemic has made forgoing insurance unthinkable, she says. Many of her loved ones have come down with COVID-19. Some friends are still suffering symptoms months after falling ill. She lost a brother-in-law in Texas.

“That’s why I am paying that nearly $1,000 a month,” Salazar-Rodriguez says, “because I know one hospitalization could bankrupt me if I didn’t have it, and I can’t take that chance.”

Though the subsidy fixes are temporary, lasting two years to address the economic impacts of the pandemic, experts and lawmakers expect the new subsidy criteria would eventually become permanent.

The KFF analysis found that subsidies would gradually phase out for those with higher incomes — for instance, a single 60-year-old making about $160,000 would not receive a subsidy, because no silver plan would cost more than 8.5% of his income.

Republicans oppose the bill’s proposed enhancements to ACA subsidies. Brian Blase, a senior fellow at the Galen Institute, a nonprofit group that researches free-market approaches to health reform, has criticized the proposal in a recent analysis, saying it shifts the burden of paying premiums from private payers to taxpayers without addressing the causes of high premiums.

He argues a family of four headed by a 60-year-old earning almost $240,000 could, under the proposed restructuring of the law, qualify for a nearly $9,000 subsidy.

The Wall Street Journal seized on Blase’s example in a recent op-ed. “These are not the folks hit hard by the pandemic,” the editorial staff wrote.

Many of the changes the relief package proposes date back to the original passage of the ACA — President Barack Obama’s signature domestic policy that overhauled the nation’s health care system. At the time, those who wrote the law expected Congress would observe how it worked and make adjustments and improvements in it over time. But the law instead became a lightning rod for GOP opposition.

The latest proposal is part of the ACA’s “unfinished business,” says Keith of Georgetown University.

She notes there are other improvements that could be made – remedies for coverage gaps not addressed by this package, such as the so-called family glitch, in which a family’s eligibility for marketplace subsidies is based on the cost of job-based coverage for one individual rather than whether coverage for the family is affordable.

The current bill “is narrow compared to the wish list Democrats have, but it would do so much with premium affordability in this way right now,” Keith says.

Kaiser Health News produces in-depth journalism about health policy issues, and is not affiliated with Kaiser Permanente. Together with Policy Analysis and Polling, KHN is one of the three major operating programs of the Kaiser Family Foundation, an endowed nonprofit.