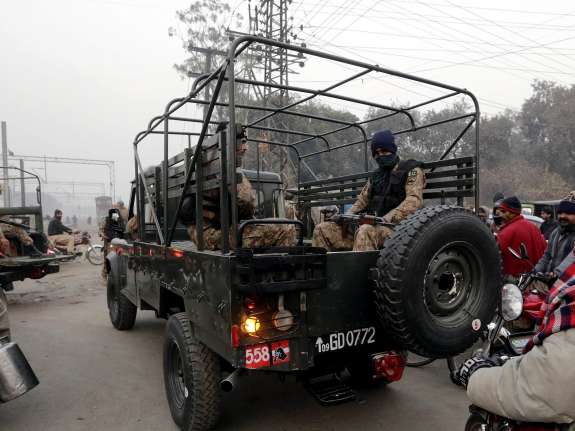 Pakistani army soldiers patrol near the Kot Lakhpat Central Jail in Lahore as security has been increased to high alert after government lifted a six-year moratorium on executions.
Image credit: Rahat Dar

A military operation involving Pakistani airstrikes and ground troops has killed 39 Islamist militants, including several top commanders near the Afghan border, the military says. It comes a day after the country’s security forces said they’d killed the alleged organizer of a deadly assault on a school last week that killed 149 people, mostly children.

A Pakistani statement related by The Associated Press said an underground tunnel system and a large underground cache of weapons and ammunition had been destroyed in the operation in North Waziristan.

“The military claimed several important militant commanders were among the dead, but didn’t provide further details on the identities of the slain militants.

“Also late Friday night, Pakistani troops ambushed a large assembly of militants on the border between the Orakzai and Khyber tribal regions, the statement said.”

The Friday night attack may have been a reference to earlier reports that Pakistani security forces had killed a Taliban commander known as Saddam. The Washington Post says: “The 25-year-old is believed to have provided lodging for the seven Taliban fighters who stormed the army-run school in Peshawar on Dec. 16, according to local officials. He helped guide the fighters, all of whom were killed in the attack, to the school, officials said.”

Also on Friday, a judge in Pakistan issued an arrest warrant for radical imam Abdul Aziz for refusing to condemn the school massacre, which stunned many ordinary Pakistanis who had otherwise grown warily accustomed to attacks by Islamist militants. The brazen attack has been credited with sparking an aggressive new push by the military and security forces to curb dangerous extremist elements.

“U.S. officials remain skeptical that Pakistan will aggressively confront groups such as the Haqqani network, which has targeted U.S. forces in Afghanistan, or Lashkar-e-Taiba, a Lahore-based militant group that has carried out attacks in India.

“But Pakistani military analysts say it would be a mistake to underestimate the resolve of the country’s new army chief, Gen. Raheel Sharif.”