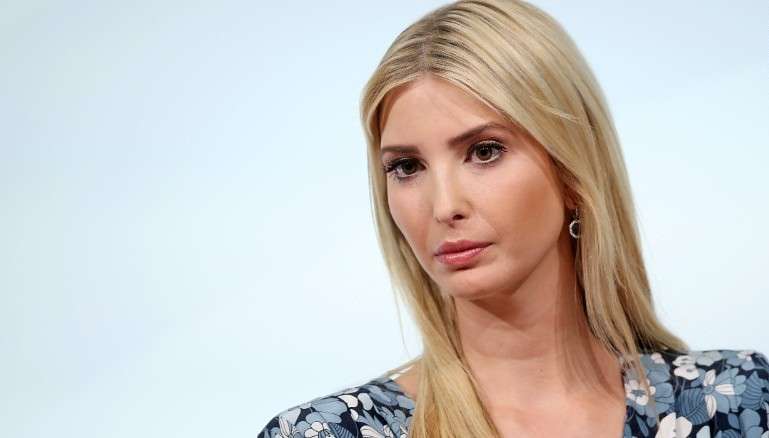 Ivanka Trump, who works at the White House as an adviser to her father, President Trump, said she has seen a shift in Republican attitudes on paid parental leave.
Image credit: Mark Wilson

Tucked inside a must-pass defense bill expected to make its way through the Republican-controlled Senate next week is a sweeping policy change: 12 weeks of paid parental leave for all 2.1 million federal employees.

It’s not a surprise that Carolyn Maloney, the Democratic congresswoman from New York, would be celebrating the move. She’s been working to get it passed for two decades, after her own experience in the workplace.

“When I was expecting my first child, I went to the personnel office and asked them what their leave policies were. They said, ‘Leave policies? We just expect you to leave,'” Maloney said at a press conference with House Democrats and labor leaders after a deal was reached to include paid parental leave for federal workers in the National Defense Authorization Act.

But President Trump has declared victory too. “With this important step, we are delivering,” Trump said on Thursday at a White House summit on childcare and paid family leave.

The summit, led by his daughter and adviser Ivanka Trump, landed on a day when Trump was working to finalize a detente in his trade war with China — and as Democrats in the House moved toward impeaching him.

“I had a very busy time and a very busy day and my daughter said, ‘You will be here.’ So that was the end of that busy day, right?” Trump said jokingly at the event.

The federal government is the largest employer in the country. But in the private sector many companies don’t offer paid leave for the birth or adoption of a child, and many of those that do don’t give a full 12 weeks paid.

In an interview with NPR, Ivanka Trump said she sees paid leave for federal workers as a first big step.

“It’s very hard for people to say, ‘Well, employers should provide this benefit,’ if we are unwilling to provide it ourselves. So you have to lead by example,” Ivanka Trump said.

Heading into negotiations to hash out differences between the House and Senate versions of the defense bill, Democrats made paid parental leave a priority. They were holding out on the Space Force, something President Trump wanted.

Whether it was a trade depends on who you ask. But the White House is pitching it as a win win for President Trump. The defense bill includes paid parental leave and creates the Space Force as a branch of the Air Force.

Many Republican lawmakers oppose the parental leave provision. But since it is part of the must-pass defense bill, there’s not much they can do about it. One senate aide said the fact that the president considers it a win is how it’s being sold to Republican senators.

Republican Sen. Ron Johnson from Wisconsin has been vocal with his displeasure, saying taxpayers shouldn’t be paying for federal workers to get these benefits.

“This really does require a lot more thought. You really need some hearings. It shouldn’t be jammed in. I just have serious concerns,” Johnson told NPR.

“But in the end, President Trump should get full credit for this because he’s the one that made it happen. I know the Democrats wanted it in the House. But this would not have happened had president Trump not strongly supported it,” he said.

The measure is the latest example of the Republican party becoming the party of Trump, accepting or just swallowing something that traditionally has not been a Republican priority. In the case of paid parental leave, Ivanka Trump says it has taken a lot of private persuasion.

In her conversations with Republican lawmakers, she says she’s seen a dramatic shift. She recalled the first time the president brought it up in a speech to congress in 2017: applause was slow and tentative.

“They looked at each other sort of confused as to whether or not they were supposed to,” Ivanka Trump recalled.

Last year’s State of the Union speech was a different story. “Everyone was on their feet. So he’s moved the needle tremendously,” Ivanka Trump said.

While she said she sees the measure for federal workers as a first step, a national program involving the private sector is a bigger lift. The concept of parental leave polls well, but proposals from Democrats and Republicans about how to do it are vastly different. Democrats also want paid family medical leave for helping older parents or dealing with a sick child.

Most Americans support the idea that employers should cover the costs for parental leave. But there are divisions over whether the government should require employers to offer the benefit.