Activists say “Every Vote Should Count”, Call on Long-term Reform to the State’s Election Process 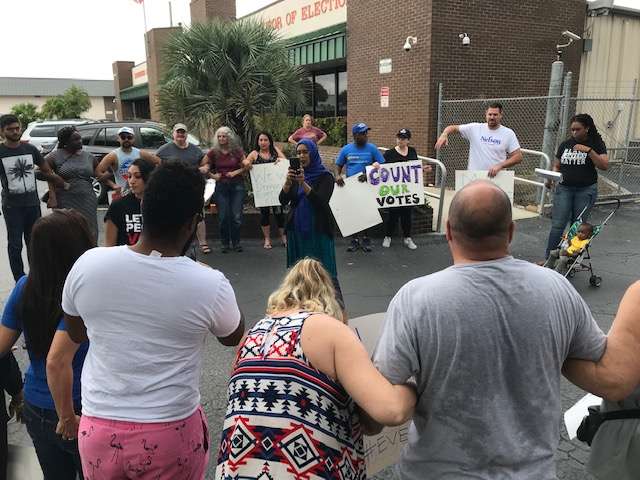 “We have a responsibility as voters. And this will forever define who we are as voters and Floridians and Americans.” Photo: Danielle Prieur

As recounts got underway in elections for Florida’s Senator, Governor and agriculture commissioner, activists were calling for a more transparent election process. As the clock ticked down to Saturday’s deadline for unofficial vote tallies, about twenty demonstrators gathered in front of the Orange County Supervisor of Election’s office in Orlando.  They chanted and waved signs with slogans like “honor our vote,” and “we deserve a fair count.”

Rasha Mubarak with the Council on American-Islamic Relations led the rally saying:

“We have a responsibility as voters. And this will forever define who we are as voters and Floridians and Americans.”

David Caicedo of Florida Student Power was with them. He said they weren’t just making sure every vote was counted in this midterm, but more long-term solutions to the problems with the state’s election system.

Gov. Rick Scott and Sen. Bill Nelson have filed lawsuits claiming there are problems with the way the state counts mail-in and absentee ballots. Counties have until Thursday to submit their machine recounts. If counts are within 0.25 percent at that point ballots will be recounted by hand.

This isn’t the state’s first recount. The last one came in 2000 during the presidential race between George W. Bush and Al Gore. And although hanging chads are no longer a problem, Gov. Rick Scott and Sen. Bill Nelson have both filed lawsuits over how ballots are counted. Counties have until Thursday to finish their recounts.