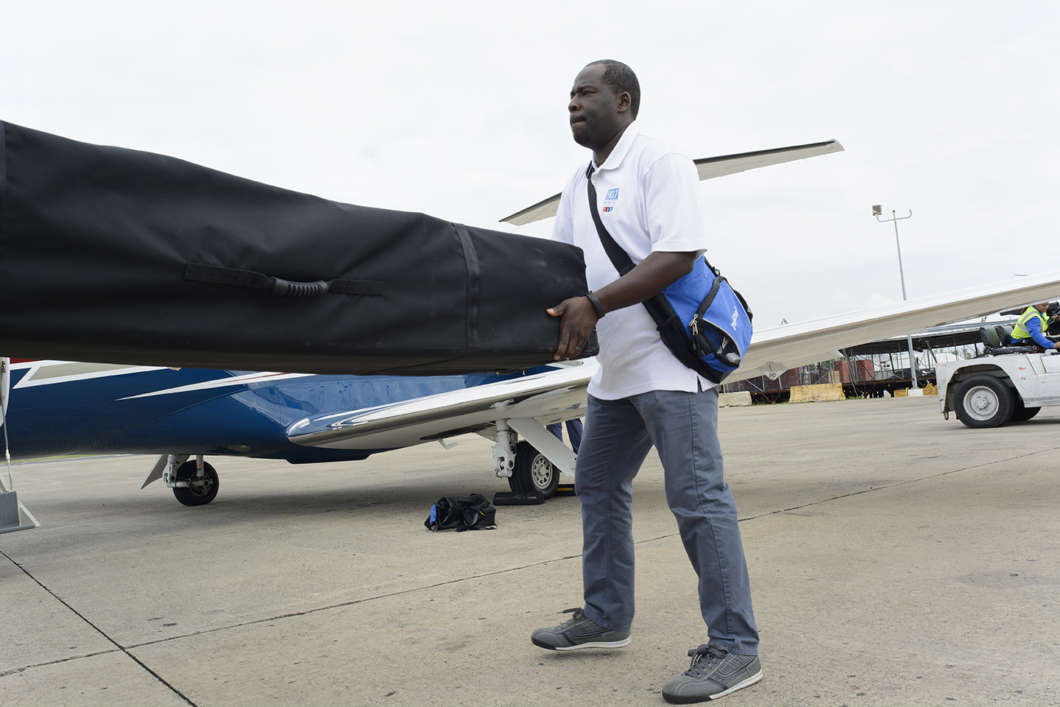 LaFontaine Oliver unloading a portable radio transmitter at an airport in San Juan, Puerto Rico, in October 2017. The equipment was destined for a public radio station in Puerto Rico who lost power after Hurricane Maria. Photo: Eric Breitenbach

The media landscape is changing fast. In Public Radio, terrestrial radio is no longer the only means of distributing content. Six years ago, we weren’t telling listeners to ask their smart speaker to play WMFE — or NPR — and the explosion in podcasting has given audiences much more flexibility and freedom to choose what to listen to — and when.

LaFontaine Oliver has watched some of that change unfold and had to figure out how to navigate through the uncertainty. After six years he’s leaving his role as president and general manager of 90.7 WMFE. We sat down with LaFontaine Oliver to talk about what’s changed and what’s next, for WMFE and at his new role leading WYPR in Baltimore.

“I’m going to miss the people, first and foremost” says Oliver about his decision to move on.

“Over the course of six years, you get to know people, and you get pretty close.”

And he says he’ll miss the city.

“I’ve certainly learned, like most people, that there is so much beyond the theme parks and the hospitality industry and travel and tourism. There are just these wonderful pockets and neighborhoods with all sorts of unique things happening.”

Oliver says it was not an easy decision to make.

“They call us the sandwich generation. We have our kids on one end and our parents on the other end,” he says.

the move to Baltimore began to make more sense as he and his family began to face some of the challenges that come with aging parents.

“That’s been a bit trying for my family, and this gives us an opportunity to…take a more active role in taking care of them.”

“I’ve been telling folks, [this is] the toughest decision I think I’ve had to make in my life to date, not just thinking about professional but in my personal life,” he says, adding that with a daughter in college and a son heading to college in the fall, he and his wife hope to be “frequent visitors” to Orlando.

Oliver says he excited to lead WYPR, which he calls “a great station in a great community, a community that needs a really strong public radio station, as they go through a number of challenges,” noting the resignation of Baltimore’s mayor.

“You have there a station, like WMFE here in Central Florida, that’s on the pulse of that.”

As the means of media consumption changes, Oliver says public radio is “by and large” dealing well with those changes.

“We’re not sort of sticking our head in the sand and saying ‘no this is not happening, and we are terrestrial AM and FM broadcasters.’ I think most of us have accepted the fact that we need to meet our audiences where they are, we have to stake claim to every platform where they may roam.”

“NPR helps to pull the system along. They just recently announced some new initiatives that will allow more content to smart speakers coming from local member stations,” he says.

“They are nationally the biggest player in the podcast space, which is great for local member stations. It helps pull us along, it helps induce that sampling. It helps bring in a younger, more diverse audience into the public media tent.”

Reflecting on some of the big issues WMFE has covered over the last six years, Oliver says the station made an impact with its reporting on the Pulse nightclub shooting.

“I could not have been more proud of how this station reported on and contributed through that reporting to the healing that needed to happen here in the region after the Pulse tragedy,” he says.

His advice to whoever steps into the role as president and general manager of WMFE?

“Take some time to listen,” he says.

“I think it’s important for a leader to be able to listen, then inventory your thoughts and then figure out where you can make an impact.”