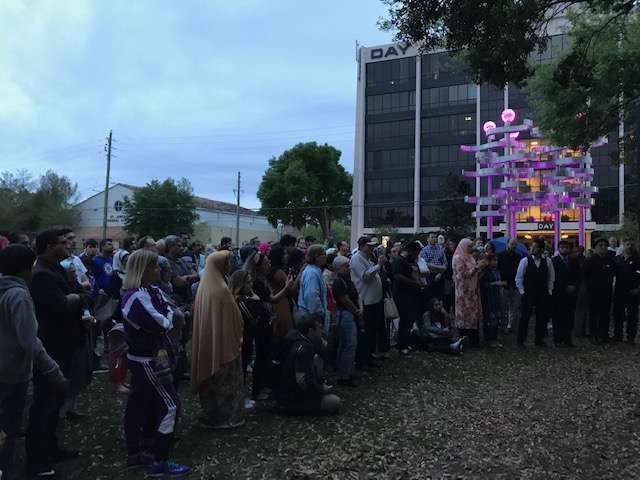 Muslim activist Rasha Mubarak says the shooting in New Zealand reminded many in Orlando of the 2016 Pulse nightclub shooting. That’s because both shootings had a similar number of victims. Photo: Danielle Prieur

Political and religious leaders, members of the Muslim community, and allies joined together in Orlando Saturday for a vigil for the victims of the Christchurch shooting.

Muslim activist Rasha Mubarak says the shooting in New Zealand reminded many in Orlando of the 2016 Pulse nightclub shooting. That’s because both shootings had a similar number of victims.

That’s why Mubarak called on Orlandoans to rally around her community just like they did the LGBTQ community after Pulse to show the world what it means to be Orlando Strong.

“That we are not going to let this divide us. We’re going to mourn for the dead, but we’re going to fight for the living.”

She says this means community members-both Muslim and non-Muslim-should continue to have an open dialogue.

That’s why Imam Tariq Rasheed is opening his mosque-the Islamic Center of Orlando-to all visitors between 3 and 5 on Sunday to talk about how to fight growing white supremacy.

“I am a strong believer in dialogue and in making connections and bridges. And I believe that if we sit down and talk we can bring about change.”

He says the mosque will continue to open its doors to the local community for conversations like this one to give people an opportunity to learn from one another.

“I don’t have hatred in my heart toward [the shooter]. I am concerned about what made him that evil and we should work together to keep those sources from contaminating the mind of the next generation.”

This is a model that Dr. Shakil Ahmed says the American Muslim Community Centers in Longwood has used at events like their yearly interfaith Ramadan iftar-a meal that breaks the fast.

“We consider everybody our neighbors and part of our community. Regardless of their faith, we’ve always tried to build bridges and make connections.”

But he says relationships also need to be built between the Muslim community and leaders at the national and local levels.

“See what happens when you have a hateful rhetoric going on? This is what happens. Somebody just gets on the wrong path and they try to execute thinking you are my role model sitting up there somewhere.”

But for now, groups like Sadaf Said’s Muslim Women’s Organization are responding to some of the most urgent needs in their communities after the shooting-grief counseling and resources to talk to children about Islamophobia.

“I think when you’re sitting at home and you see everything on the news you don’t know what to do. It’s helpless and scared and everything all at once. At the same time after something like that, when you can come be here with your community and how everybody turns out. That brings you hope as well.”

She says it’s when Orlandoans reach out to each other after these tragedies that the community actually becomes stronger-something she experienced after Pulse.

“I’ve been able to meet people from the LGBTQ community that I was never able to talk to. We live in a bubble sometimes and I think things like this happen and they take us out of the bubble and into the real world.”

Groups like Saadia Qureshi’s Preemptive Love are already training volunteers to do just-to have conversations with people they usually wouldn’t know much about.

“Love is the only way to bring people together. If we sit in fear, and if we sit in ignorance and sit in our lane. We will never be able to overcome it.”

She says the group has already sent out volunteers to mosques this weekend where they simply sat and listened to people and let them know they cared.

“The other side is just as human as you. They have fears just as much as you have fears. We are not alone in this. If you can step out of your comfort zone and reach out that’s all it takes. And you will not only help the person on the other side you will help yourself.”

Fifty people were killed, and another fifty injured when a gunman opened fire on two mosques in Christchurch New Zealand on Friday.