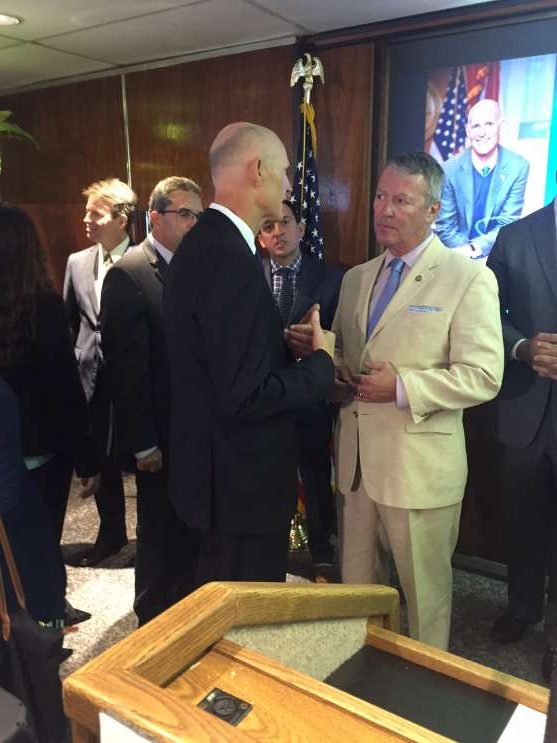 Orlando Mayor Buddy Dyer is urging the governor to approve the University of Florida takeover of Sanford Burnham.

The governor was in town for a press event, where Dyer talked with him about what the state can do to help keep Sanford Burnham in Medical City.

“Well I think the state should approve that,” Dyer said. “That’s what I just chatted with the governor about. Enhancing the University of Florida’s research capabilities in Lake Nona at the Medical City will ultimately be a good thing for Orlando.”

“I haven’t seen the details,” Scott said. “I know Sanford-Burnham and UF are interested in putting this merger together. My office is working with them to get the details.”

In letters sent to the governor Thursday, UF President Kent Fuchs said without their takeover, there is no viable alternative to keep Sanford-Burnham in Orlando. But their plan requires not just approvals from the governor, the legislature and Central Florida groups involved in the original deal – it would require money.

In specific, $30 million in leftover funding from tax deal that got Sanford Burnham in Orlando. And UF would need that money with no strings attached for job creation – and then they would need $3.7 million per year from the state for operations.

In return, UF projects nearly 400 private sector jobs and $58 million in wages added to the economy. In total, UF wrote that they hope to get the initial deal signed by June 30 with Sanford Burnham.

The University wrote that without the deal, there would be no benefit to the state.