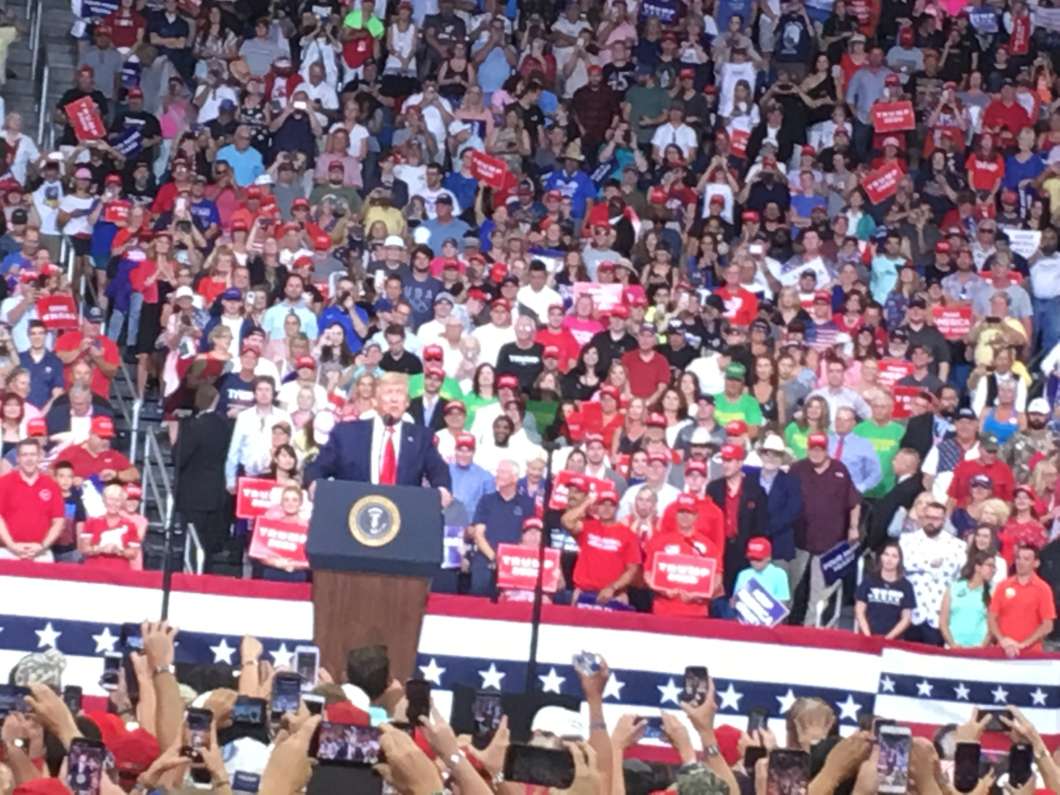 He launched his campaign Tuesday night in Orlando, smack in the center of the nation’s most populous swing state.

“Tonight I stand before you to officially launch my campaign for a second term of president of the United States,” he said.

Florida is a must-win for the president in 2020, and as he began laying out his case he observed it was four years ago this week that he first launched his unlikely candidacy, upending a political establishment that he characterized as corrupt and out-of-touch with constituents.

He described his “Make America Great Again” slogan as “the greatest theme in the history of politics.” But he said having achieved greatness it was time for a new slogan.

Trump touched on a range of issues during his more than hour-long address at the nearly full Amway Center, the 20,000-capacity downtown arena where the NBA’s Orlando Magic play. Only a smattering of empty seats remained in the rafters.

He described the U.S. economy as “the envy of the world,” denied collusion with Russia and labeled Democrats as socialists. He promised more than 400 miles of a southern border wall would be built by the end of next year and went as far as to suggest his administration could cure AIDS in the United States.

He told supporters he was thrilled to be back in what he described as “his second home.”

“In many cases I think I could say it’s my first home, if you want to know the truth. It’s the great state of Florida,” he said.

Earlier in the day outside of the Amway Center, the rain came down in sheets. On every corner, people hawked MAGA hats and ponchos.

The rain didn’t stop Judah Wade. He’s got long dreadlocks, gold teeth and dark sunglasses. He wore a shirt saying Trump and the Republicans are not racist.

Wade said the economy is doing better under Trump. African Americans, as a whole, tend to lean Democrat by huge margins. But Wade said they should not let someone else dictate who they vote for.

“Do your own research and be fair minded, honest and balanced and see what works better for us,” Wade said. “Not only as a people, but as a country.”

Jane Ashwell huddled out of the rain at a SunRail station in downtown. She was wearing a brand new, bright red Make America Great Again Hat.

“Well, I’ll be honest, I didn’t put it on until we got on the train and saw other people coming on in their Trump gear, because I’m a little bit afraid,” Ashwell said.

Her husband Scott Ashwell said the biggest opportunity for Trump at his speech was to give a unifying message. “I’ve just never seen so much true division, with one side pitted against another,” he said.

“Half of these people hiding behind these police officers, next time there’s a police involved shooting theyre gonna be on this side of the protest,” said Gary Snow, one of the Proud Boys using a megaphone at the rally. Snow points at several of the black police officers.

One of the Proud Boys said they only came to support Trump.

“We love everybody, we don’t have anything against anybody, but we’re not afraid to speak our voice, and who we support and what we’re about,” he said. “We won’t be silenced.

On the other side of the police line, a 20-foot-tall Baby Trump balloon was the center of attention. Chad Lewis snapped a selfie with it. He said there’s nothing the president could do to make him support his re-election.

“No, absolutely not,” he said with a laugh. “I don’t agree with what he’s doing, how he acts as a president. I don’t think he acts presidential.”

And that may be the takeaway from outside the rally. Democrats and Republicans entrenched back to their own side – and it took a line of police officers between them to keep the peace.