Orlando Town Hall On Health Reform: ‘Fight Like Hell’ To Save Obamacare 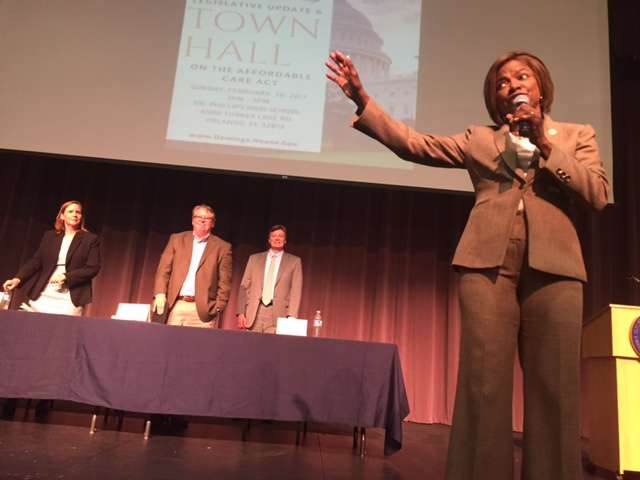 Congress goes back in session Monday, ending a week of often contentious town hall meetings. The crowd at Demings’ town hall on health care reform in Orlando Sunday was tame compared to some other events.

Still, Demings was asked about the so-called nuclear option. Would she work with Republicans if the Affordable Care Act was repealed with no replacement?

“You heard me talk about my brother who did not have health care coverage,” Demings said, to applause. “I will lead the charge, and I’m sure I’ll have many of my colleagues with me, leading the charge to make sure we provide health care to people who don’t have it.

Joel Melsha was one of the speakers. She has three family members who have benefited from the Affordable Care Act. Two family members would likely be uninsurable if insurance plans still had lifetime limits on the amount of money they have to pay. And another – insured through Obamacare – has to wait a year to see if she needs brain surgery.

The people at the panel were clear: No one thinks the U.S. will go back to having lifetime limits, or refusing coverage to people because of pre-existing conditions. That, Melsha said, put her at ease.

But her message to Congress was direct.

“Do your job,” Melsha said. “Your job is to represent the American people, to make sure our needs are met. Health care is a vital need for any person.”

Some at the town hall asked Deming to support provisions to allow health savings accounts to rollover year-after-year, and to sell insurance across state lines.