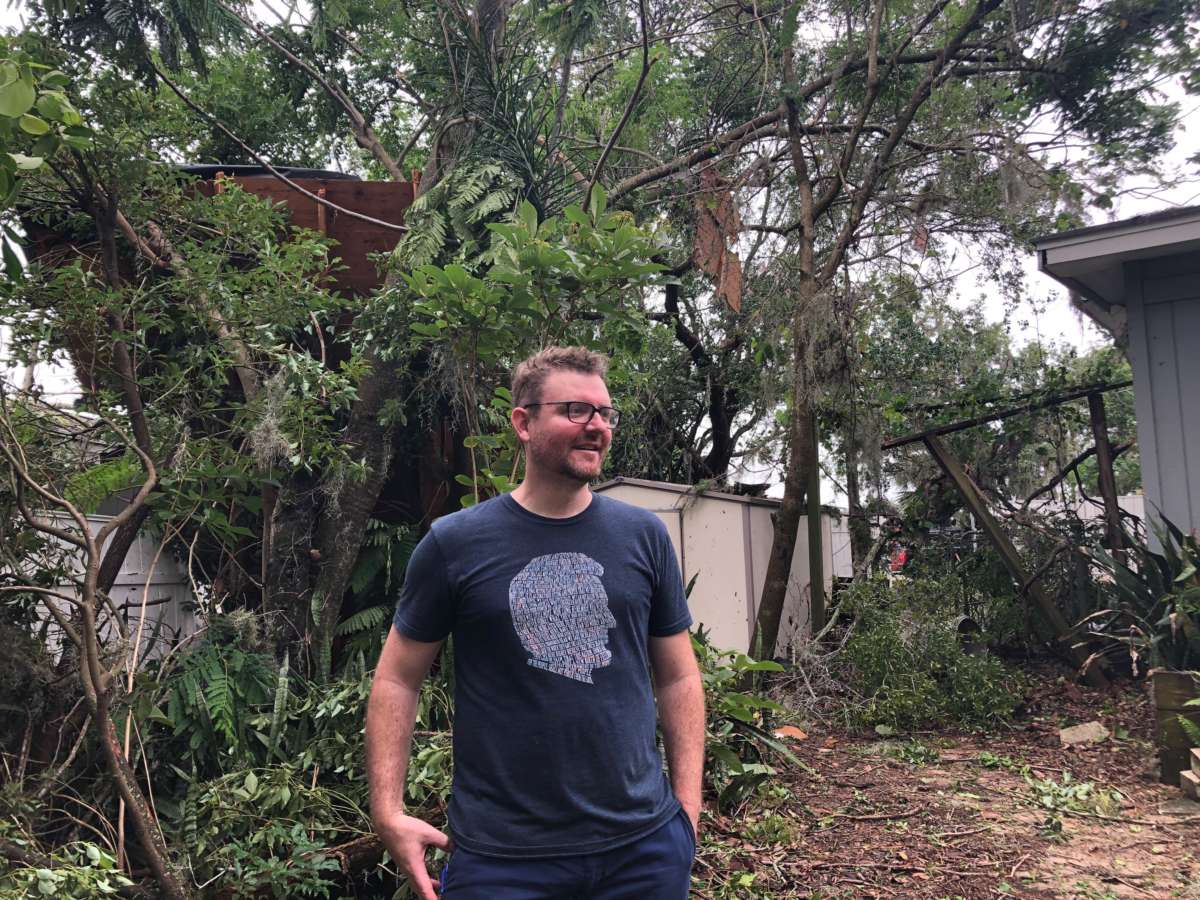 Ben Jones, his wife, 10-week-old daughter and dog all took shelter in a closet while an F1 tornado ripped the roof off of his Orlando home.

Lauren Senninger took shelter in a closet Saturday night with her husband and 10-week-old daughter while a tornado ripped parts of the roof off her Orlando home. “My husband was able to grab our smallest dog just in time as he saw the roof coming down right here,” Senninger said Sunday morning.

Tropical Storm Cristobal may be dissipating in the panhandle this morning, but it left a lasting mark on Orlando: An F1 tornado touched down over the weekend, ripping roofs off homes, downing trees and damaging vehicles.

The twister with 100 mile-per-hour winds displaced an estimated 30 to 50 residents. The National Weather Service reports that the tornado started as a water spout on Lake Conway and lifted near Lake Lawsona around 7:30 Saturday night.

Surveying the damage, Senninger showed the nursery she had just finished: Pink and white roses on the wall, rocking chair, crib, and a tent in the corner. Wet drywall is piled on a changing table next to a toy.

“A lot of it is stuff that I don’t know if I’ll necessarily be able to replace,” Senninger said. “That’s been the hardest thing for me personally. Putting together a baby’s room and then just having it destroyed is something I don’t wish on any mother.”

Lauren Senninger’s home lost its roof. She hid in the master bedroom closet with her husband and 10-week-old baby while the tornado came through. pic.twitter.com/TwR3IPwcMk

Officials with the fire rescue departments in Orange County and in the city of Orlando said no residents were injured in the tornadoes.

“I would just tell to anyone that has to worry about something like this, if you live in Florida, know where the safest part of your house is,” Senninger said. “Because if we didn’t know that, we would be hurt.”

Near the intersection of Fern Creek and Michigan, the sign for Aardvark Beverages was toppled over, seemingly held up by power or cable lines. Gary LaRose’s home is nearby. His shed was picked up off its foundation and tossed into his fence.

Here you can see the sign for @aardvarkbev being held up by lines from the power pole. pic.twitter.com/0cfqcawETC

This is what’s left of Gary LaRose’s shed. The #Orlando #tornado picked it up off its foundation last night. Gary says he doesn’t know of any neighbors who have been hurt, but some were home when a tree came into their home last night. pic.twitter.com/kCWyQXSqvt

On Briercliff Avenue, a City of Orlando truck picked up pieces of downed trees. One home had damage to the roof and to a car in the driveway.

This is on briercliff in #Orlando. A tree has cover in part of the roof of this house, as well as landed on a vehicle in the driveway. Homeowners didn’t want to be interviewed. pic.twitter.com/XuHc77Mk1r

The American Red Cross was helping families who had their homes damaged. In addition to the confirmed tornado in Orlando Saturday night, there was also a public report of a tornado at 8:30 p.m. on north shore of Lake Monroe, and other unconfirmed reports were near Sea World and Universal Studios.

Orange County Mayor Jerry Demings said the tornadoes did an estimated $1 million dollars in damage to commercial and residential buildings.