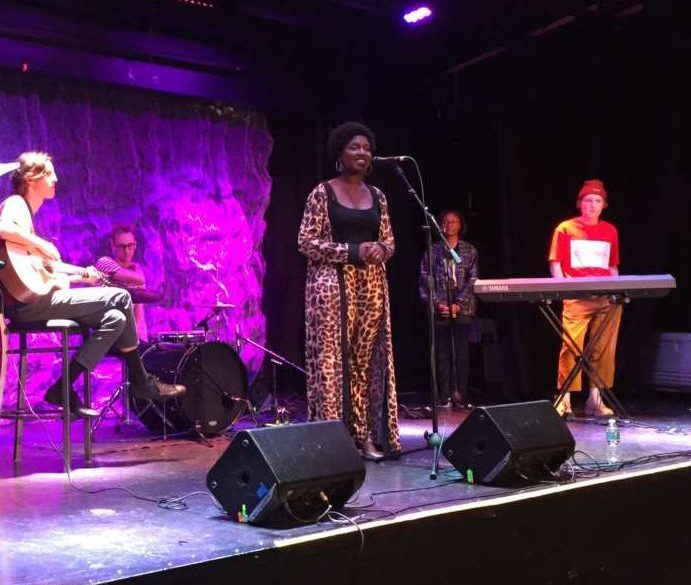 Orlando singer Chloé Hogan is on the biggest stage of her life- competing in NBC’s The Voice.

The 20-year-old was one of WMFE’s local favorites for NPR’s Tiny Desk contest last year.

Hogan survived a knock-out round of the competition this week, thanks to a ‘steal’ by one of the show’s judges- John Legend.

WMFE’s Matthew Peddie talked to Hogan about the challenge of competing and isolating during the pandemic-  and making it through the knockout round.

Chloé Hogan: It was really more about how can we each constructively, like, get that constructive criticism that we need in order to grow and advance. It wasn’t really about “Oh my gosh, who’s gonna win, who’s gonna lose”, because, thankfully enough, thank God, in our situation, we both won, in a sense in that Carter [Rubin] won the actual knockout, and I won by having the opportunity to stay on the show, and be stolen by John Legend. So it was really a win-win situation. But I will say that I was nervous at one point, because it was just like, the moment of he is so incredibly talented, this is not going to be easy for me, I gotta give it 150% of what I’ve got, in order to stay in this competition. So that’s a part where I got a little goosebumps, chills and everything.

Matthew Peddie: So you had been working with Gwen Stefani, like she was coaching you up until that point? And now you get to work with John Legend- is that how it works?

CH: Yes, I get the honor and the pleasure of working with both, which is just, I couldn’t have asked for a better transition, because they’re both so lovely.

MP: How do you, sort of, balance out the fact that, it is a competition, right? So people are sort of hanging on and waiting to see who gets to stay on and who doesn’t make it through. But it’s also a learning opportunity, as you pointed out, so how do you tamp down the the feelings of nervousness or anxiety or whatever, about whether you actually get to stay on and make the most of getting to work with people like John Legend and Gwen Stefani and the others?

CH: I honestly think that the self reflection time is so crucial. And we’re given more than what you would normally have in a season that is not happening during the time of COVID-19. During COVID, we have to be secluded and isolated. And it gives us that time to really take in everything that’s happening, take in what we’re learning from our coaches, take in our performances, take in what we want to do next, you know, and what’s happening next, what’s the next steps.

MP: Is there a part of you that wishes that it could be just a regular season without this pandemic looming in the background? You know, have the the audience just going crazy right now instead of worrying about the disease?

CH: Absolutely. I think there’s always the element you think about, Man, I wish because any true, I think, performer feeds off of the energy of other human beings. And it’s different to not have physical people, like, filling up the space when we’re performing. But there’s a magic to watching and knowing that people are watching from all around the world watching these performances and we can feel their warmth, their comforting, their love, their support, their encouragement from wherever they’re watching from. So yes, in that sense, I missed the audiences I missed the cheers and the emotion that fills up the room, the heart, but at the same time, it’s a blessing that we get to be here anyhow, so I’ll take it as it comes to me.

MP: Well, Chloé Hogan thank you so much for joining us. Good luck with the rest of the competition